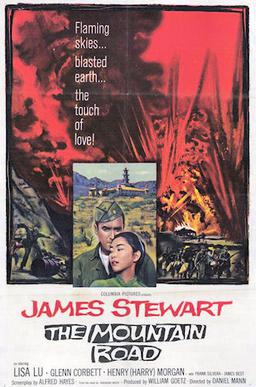 “The Mountain Road” is an odd little movie that bent over backward to be anti-war.  It marked Jimmy Stewart’s only WWII movie.  A veteran bomber pilot from WWII, Stewart avoided war roles, finding them unrealistic.  He would not have taken this role unless he was sure it would not glamorize war.  The movie was based on a novel by Theodore White.  White had been a correspondent in China in the war and was disillusioned by the corruption and incompetence of the Nationalist Chinese.  He interviewed OSS Major Frank Gleason, Jr. for the book.  Gleason served as an uncredited technical adviser.  Surprisingly, the movie had cooperation from the Pentagon.

The movie is set in 1944.  Major Baldwin (Stewart) is in charge of blowing up an airfield as the Chinese forces retreat.  His orders call for him to take his demolition unit on the Mountain Road and do what he can to slow the pursuing Japanese.  He hooks up with Madame Su-Mei Hung (Lisa Lu in her film debut).  A romance develops, of course.  It’s going to be rocky because Baldwin is bitter and anti-Chinese.  At one point, he and his crew, who include Harry Morgan as his trusty sergeant, blow up a bridge, stranding many refugees on the other side.  War is hell!  Baldwin decides to make a side trip to destroy an ammo dump.  He doesn’t have to do this, but he knows Hollywood loves explosions.

This is a strange movie.  It goes out of its way to avoid cliches.  Stewart plays an anti-hero before they became common later in the 60’s.  Baldwin does resemble some of Stewart’s flawed characters in his Westerns.   But those characters like in “The Naked Spur” and “Winchester ‘73” are still likeable.  Baldwin is not likeable.  He avoids the usual arc of gaining respect from his crew.  Conversely, he gets some of them killed.  His romance with Su-Mei is awkward and not believable, except for its final result.  In fact, one of the themes of the movie is power corrupts.  Oddly, another theme is not the corruption of the Chinese army.  Baldwin has no problems with a Chinese general who is with them.  And no problem with the Japanese.  They do not even appear in the movie.

The movie is well-acted by a cast of familiar faces (if you are a baby boomer).  Stewart is great as a character that he liked to play after his WWII experience.  Unlike the war-avoider John Wayne, he was not afraid to play jerks.  And since the movie is basically a character study, we get a heavy dose of Baldwin.  And not a heavy dose of action.  The movie is bereft of suspense until a firefight at the end.  It’s a battle with bandits, not Japanese.  The movie hints at dysfunction in the unit, but drops it.

“The Mountain Road” deserves its status as a forgotten movie.  But is it a forgotten gem?  Not really.  If you are a Jimmy Stewart fan (which I am), it certainly is a must-see.  This may be the first time you have heard of it.  It is not even in Stewart’s filmography on Wikipedia!   Although too out of the box to be effective, the film is a great tribute to Stewart the actor.  He was as gritty as Baldwin and willing to take chances with his career.  This movie did not make any waves at the box office, but I bet he was proud of it.

A trio lands on a beach on Luzon in the Philippines in 1944  /  They move through the jungle to reach a hut  /  Craig (pop singer Jimmy Rodgers) doesn’t take the shot!  /  jungle sounds  /  they hook up with Paco and his mix-gendered guerrilla band  /  mission:  see if the Japanese are setting a trap for the invasion  /  Paco is a hard-ass and not an American puppet -  interesting character and a much better actor than Rodgers (but he probably does not sing as well)  /  crossing a river by rope  /  they reach a village  /  Packo’s wife and kid were killed by American mortar fire  /  Japanese threaten to execute kids if they aren’t turned in – shot of adorable kids  /  “Combat!” type music featuring bongos /  kids sing an adorable song as the guerrillas sneak into a village  /  small battle, nothing special, no blood  /  Paco has a plain girlfriend  /  Burnett (Jack Nicholson!) and Jersey (John Hackett!) are BFFs, they have a philosophical discussion of killing humans in war  /  torture scene -  something involving fingers  /  Craig woodenly takes umbrage about the killing of prisoners   /  meet up with scene-chewing “pirate” rebel named Raymundo – he sabotages the radio – why?  because he’s a dick?  /  they go to a Japanese signaling station  /  Craig is able to stab a guard so he’s over that incident that where he couldn’t take the shot – thank goodness  /  blood splatter from neck slash!  /  no real problem getting to radio  -  actually it’s a telegraph  /  discovered and pinned down  /  Burnett is killed by a bullet that leaves no hole  - the rest get out with no difficulty;  one-third death rate for this commando raid- a little low for the subgenre  /  footage of American invasion  /  the end

ANALYSIS:  “Backdoor to Hell” is a low budget black and white B-movie.  Nicholson was friends with Hackett and director Monte Hellman and the trio wrote the screenplay on the ship on the way to the Philippines where the film was shot on location.  The Philippine military cooperated.  Rodgers was recruited as the star because he was a popular singer and he co-financed the movie.  He had a #1 hit with “Honeycomb” in 1957 and also sang “Kisses Sweeter Than Wine”.  He was a good singer, but terrible actor.  Nicholson really does not evidence future stardom here.  Surprisingly, the standout is Conrad Maga as Paco.  It was his only movie.  The film could have uses a sexy Filipino guerrilla babe.  Kudos to the casting director for casting against type?   The plot seems like it was written on a ship.  The mission is boring and there is little suspense.  The combat is average for a movie like this.  The dialogue is just blah, not embarrassing.  The movie is not a cult classic.  It’s just a bad movie, but at least it’s only one hour and fifteen minutes.

Posted by War Movie Buff at 8:59 AM No comments: 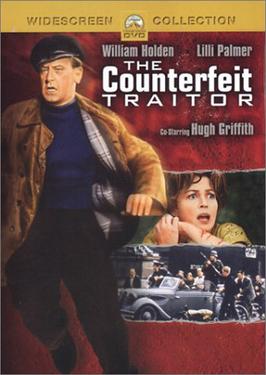 “The Counterfeit Traitor” is the true story of Eric Erickson.  It is based on the book by Alexander Klein.  It was directed by George Seaton (“The Big Lift”, “36 Hours”).  Erickson was a Swiss-American who spied on Nazi Germany.

The movie starts in Stockholm in 1942.  Erickson (William Holden) is a successful oil man who has no qualms about exporting oil to Germany.  Sweden is neutral, so technically it’s legal.  And it’s capitalism.  He ends up being “recruited” by British intelligence.  Collins (Hugh Griffith) blackmails Erickson by threatening to shut down his oil business.  When Erickson claims that’s cold-blooded, Collins says he got that way by watching the Blitz.  Erickson becomes a faux Nazi-lover to get in tight with Nazi officials. He can’t even tell his wife, or his Jewish best friend.  His oil business allows him to travel to the Third Reich.  One of his contacts is the comely Marianne (Lillie Palmer).  She’s in it to fight evil.  The love that develops will influence his amoral attitude.  The two spies are being stalked by a Gestapo colonel (Wolfgang Preiss!).  Queue the cat and mouse.

“The Counterfeit Traitor” is about a half hour too long, but it had a story to tell and took the time. It’s a story based on a book that is based on the reminiscences of Erickson, who had a tenuous relationship with the truth.  But the biggest whopper, the romance with Marianne, is apparently true.  Erickson did fall for his OSS contact who was named Anne-Maria Freudenreich.  I can’t vouch for the rest of the people he were involved in his escapades.  As far as the man himself, the movie Erickson seems close to his real persona.  He was born in America and then migrated to Sweden in 1924.  He volunteered for the OSS.  I do not know if they blackmailed him into working for them.  He made over 30 trips to Germany to report on German synthetic oil plants.

While the story may perpetuate the lies Erickson told about his spying, the movie’s plot gives off the whiff of authenticity.  The romance is realistic and it does not dominate the narrative.  The movie is not stuffed with cliffhangers.  There are the usual close calls for an espionage movie.  His hobnobbing with Nazis is believable.  The film is character driven and it is strong in its characters.  It is a nice touch to have his best friend be Jewish, for instance.  The villains are hissable, especially a creepy Hitler Youth boy.  Unfortunately, Wolfgang Preiss is underused.

“The Counterfeit Traitor” is a forgotten gem.  I had not heard of it until recently.  I was pleasantly surprised.  It’s not a great movie, but it is entertaining.  William Holden was on his game and it has a strong cast.  It’s a bonus that it is based on a true story, although loosely based.  It doesn’t go overboard on the spying, but you do get the impression that Erickson took major risks.  He doesn’t get caught.  That can not be said for everyone.