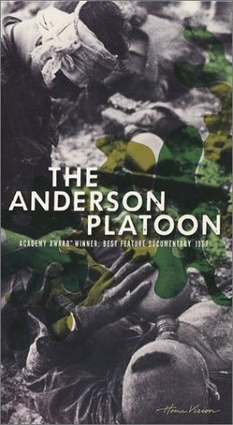 Let's close out the year with a classic that holds up to my scrutiny.

“The Anderson Platoon” is an acclaimed documentary by French director Pierre Schoendoerffer.  He was a war cameraman with the French army during the siege of Dien Bien Phu.  Unfortunately, when he surrendered with the rest of the army, his footage was lost or destroyed.  After the First Indochina War, a French producer approached Schoendoerffer about completing his documentary.  He was embedded with a platoon in the American 1st Air Cavalry in South Vietnam for six weeks in 1966.  The resulting documentary won the Best Documentary Feature at the Academy Awards.  A sequel was released in 1989 entitled “Reminiscences”.  In it Schoendoerffer visits some of the men in the platoon twenty years later.

In June, 1966 the first platoon of D Company is sent on a “seek and destroy” mission to locate and then use “the vast array of firepower” available to wipe out communist forces in a sector of South Vietnam.  Its commander is an African-American Lt. Joseph Anderson.  He is 24 years-old.  The platoon is heterogeneous with whites, blacks, Mexican-Americans, and even a Native American.  In other words, it’s a typical platoon reflecting the make-up of the army.  And it goes through experiences typical of a tour of duty in Vietnam.  If you watch the doc, you will learn that the boys did a lot of wading through water.  They had a fear of ambushes and booby traps.  They were ambushed and did some ambushing.  It rained a lot during the monsoon season.  They captured Viet Cong suspects, but they also tried to win hearts and minds by giving candy to kids.  The mission is an “ordinary” one.  There is a lot of confusion and random firing.  Then an air strike is called in.  The dead bodies and weapons are counted.  War won.  They leave.

“The Anderson Platoon” is probably the best Vietnam War documentary.  Based on its coverage of a typical platoon and the typical activities of the unit, it seems other filmmakers saw it and it influenced feature films.  You can read grunt accounts of the war (Anderson appears in the book Bloods:  An Oral History of the Vietnam War by Black Veterans), but to eyewitness it yourself had to help movie-makers.  It certainly helps viewers to visualize the war.  You are with this platoon.  You get the sights and sounds.   Schoendoerffer had been in the shit with the French and he clearly had no fear.  The platoon encounters the enemy and he is daringly close to the action.  The film is not “Hearts and Minds”.  Although it does show the efforts that led to that phrase.  It takes no position on the war.  Schoendoerffer avoids saying I told you so.  Speaking of which, there are long stretches where there is no narration.  He was not interested in making a propaganda puff piece nor an anti-war screed.  He did end up making a documentary that is more entertaining than many Vietnam War movies.  Watch it instead of “The Boys in Company C”. 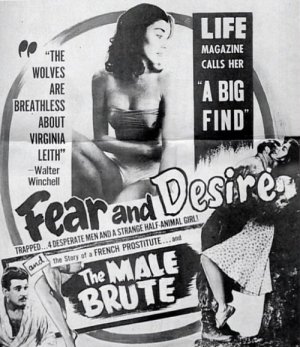 Check out that poster.  Apparently it was felt that the lure to get people to watch it was to hype Virginia Leith.  The poster has absolutely nothing to do with the movie.


“Fear and Desire” was the first film of Stanley Kubrick.  He edited, directed, and produced it.  For the whopping sum of $53,000.  He used the money to hire a 15 person cast and crew.  The screenplay was written by his high school classmate Howard Sackler who later won the Pulitzer Prize for “The Great White Hope”.  Kubrick cameraman used a baby carriage for tracking shots.  During the production, Kubrick almost killed his cast with poisonous gases.  Kubrick went on to make “Paths of Glory” four years later.

The movie starts with a narrator pontificating on war.  “There is war in the forest…”  The narration tells us the movie will be a fantasy.  Four men from a downed plane are six miles behind enemy lines.  Their plan is to reach a river and raft down it to friendly forces.  We get overlapping inner monologues to character develop.  They move through the woods and run in to an enemy base.  For God knows what reason, they decided not to bypass it.  They kill two guards in a scene with quick cuts, closeups, and film school editing.  They encounter a girl and capture her.  They tie her up and leave their youngest member Sidney to watch her.  It’s a terrible scene with a bad actor spouting stupid dialogue.  He sets her free thinking she fancies him.  He is suddenly mental and shoots her when she runs. (Did I mention this was written by a future Pulitzer Prize winner?)  Sgt. Mac is obsessed with killing an enemy general.  They have built a raft without any axes or rope.  Mac convinces their leader, the pilot, to let him take the raft and go after the general.  He promises to bring the raft back!  Upstream.  Going upstream on a raft is a good metaphor for finishing watching this movie from this point.

First movies are like first albums.  Some artists start out with a great album and are never able to replicate it.  Others start out with an embarrassing debut, but go on to produce many quality albums.  The same is true for movie directors.  I believe it is more common for a director’s first effort to be the bottom of their career.  This is certainly true for Stanley Kubrick.  The man who directed Paths of Glory, Dr. Strangelove, Spartacus, and 2001:  A Space Odyssey started out with a dog.  Although a few delusional critics praised it (incredibly, it has an 80% on Rotten Tomatoes), it was a box office bomb.  Kubrick disowned it and tried to keep it from seeing new life after it went missing for a few years.  He described it as “a bumbling amateur film exercise.”   Kudos for honesty.  He’s not the only great director to disown his first effort  (See below for other famous directors have face-planted on their first film.)

The movie is in fact terrible.  The only thing good I can say about it is that Kubrick took chances and tried some flashy cinematography.  He was let down by the ridiculous script and bad acting.  As if the dialogue is not bad enough, we also have to hear the thoughts of the men.  The acting is what you would expect from such a low rent cast.  Speaking of bad starts, Pvt. Sidney was played by future acclaimed director Paul Mazursky.  I bet he did not put it on his resume.

Do Stanley Kubrick a favor and don’t watch his movie.  You’ll be doing yourself a favor, too.  If you do see it, keep in mind that Stanley was not the only great director who laid an egg in his debut.  Here are some other great directors and their less than great first films. 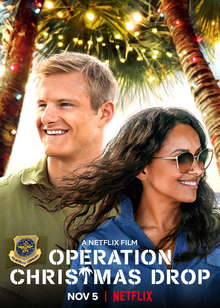 I managed to find another Christmas movie to review.  I’m having to dig deep now, so this one is actually more of a military movie.  There is definitely no combat in it.  But it does have a battle of the sexes.  Although on Netflix, it certainly has a Hallmark feel to it.  But unlike your typical Hallmark Christmas movie, it is actually is based on an historical event that is ongoing.  And it was shot on the location of that event, which was a nice touch.  The Air Force allowed the use of Andersen Air Force Base on Guam.

Erica (Kat Graham) is the aide to a Congresswoman (Virginia Madsen).  She is very efficient and is looking forward to a promotion to chief of staff.  She’s not really looking forward to Christmas because her mom has died and she is uncomfortable with the new wife.  Still, she wasn’t planning on spending the holidays on Guam.  She is sent by her ball-breaking boss (nice touch that the stock role is played by a woman for a change) to inspect the base, specifically Operation Christmas Drop, and report that the base should be closed, wink wink.  Operation Christmas Drop involves dropping toys, supplies, etc. to islanders over a large area.  It’s officially good practice for paradropping military supplies.  The base commander knows Erica’s coming and since every base is paranoid about closure, he picks his most charismatic pilot to chaperone her and convince her the base is valuable and the operation is not costing any taxpayer’s money.  Andrew (Alexander Ludwig, Bjorn Ironside on “Vikings”) is charming in a snarky way (just like me!) and naturally they do not hit it off, at first.  Although he is able to show that the base is run efficiently and everything about the operation is on the up and up, Erica has been sent by a grinch to be grinchy.  And she does want that promotion.  The base is going to need a what?  (Correct answer: Christmas miracle.)

If you are familiar with Hallmark Christmas movies, you’ve seen this plot before.  Big city girl goes to a small town (island) to shut down/buy out a business.  Her boss is a scrooge and she is a scrooge minion.  She encounters a hunk and they work their way from cat and dog to female cat and male cat.  An assortment of colorful locals are thrown in.  She are going to kill their dreams.  And at Christmas time!  Spoiler alert:  if you have never seen one of these movies, a couple of people become a couple and the grinch shows up to have his heart grow several times larger.

I have a Christmas tradition of looking for a list of the best Hallmark Christmas movies and then strolling through the TV guide to tape any on the list.  Over the years we have seen some that are cute, but most are enough to make you add rum to your eggnog.  This movie would be below average on the Hallmark scale of treacly.  The leads are good actors.  Their arc, while painfully predictable, is charmingly accomplished.  The rest of the cast is decent for a low budget movie.  The dialogue did not make me throw up in my mouth even once.  The setting on Guam is liable to cause some Northerners to cry.  There’s a difference from a Hallmark movie – no snow.  The love birds scuba dive.  This is undoubtedly the only Christmas movie with a gecko and tropical fish. The movie manages to squeeze in some Christmas songs, but with a Pacific flair to them.

The best thing I can say about the movie is it brings to light a nice Christmas event that will probably not lack for funding in the future.  Since 1952, Operation Christmas Drop has been delivering Christmas supplies to Pacific islanders.  Andersen Air Force Base on Guam and Yokota AFB in Japan (where I lived for three years as a boy) are still operating the longest running Department of Defense mission.  It is also the longest running humanitarian airlift in the world.  C-130s paradrop boxes weighing up to 400 pounds.  It does not rely on taxpayer’s money.  That’s right, the military that spends trillions can’t afford to foot the bill.  Okay, I’m being a bit of a scold there so let’s just be thankful that our extremely  wealthy military gifted its cooperation for this nice little movie.  Felis Pagua!