“Yesterday’s Enemy” is a Hammer Film that was nominated for four BAFTA’s!  It was directed by Val Guest (“The Camp on Blood Island”) in five weeks on a soundstage.  It has no musical score.  The screenplay was based on a teleplay.  The writer was inspired by an alleged war crime involving a British officer.   It was nominated for Best Film (“Ben Hur” won), Best British Film (“Sapphire”) and Best Actor – Stanley Baker and Gordon Jackson.  It is considered by many, including Stanley himself, to be one of Baker’s best roles.

The movie is set in the Burma Campaign in WWII.  A British unit is struggling through a jungle swamp.  They are exhausted and have several wounded on stretchers.  One of the wounded is their major, so Capt. Langford (Baker) is in command.  They arrive at a native village and take more losses in eliminating the Japanese garrison.  They find a map that could be valuable.  They take a collaborator prisoner and Langford is determined to get him to reveal what the map shows.  He threatens to execute two villagers to get the collaborator to talk.  The padre (Guy Rolfe), the doctor (David Oxley), and a war correspondent (Leo McKern) argue that the executions would be a war crime.  They offer good arguments, but Langford’s response is:  “There’s only one way to fight a war – with the gloves off.”  He finds out the map shows an upcoming Japanese counteroffensive.  They must get the information back to headquarters, but the radio is not working and a Japanese force is closing in on the village.

“Yesterday’s Enemy” is a thought-provoking film that takes itself too seriously.  It was clearly meant to tread on ground seldom seen in a British war movie.  The two sides of the coin are well represented.  There is a lot of talking for a war film, but it is necessary to flesh out the topic of does the end justify the means in warfare.  Although the dialogue reminds one that the movie was based on a play, it does have some good action.  The set is surprisingly junglelike and although there is no musical score, the sound effects are appropriate.  The acting is stellar, as is to be expected of the cast.  Baker was always ready to take chances and here he plays an anti-hero that would be more at home in a 1960’s war movie.  In fact, the movie is ahead of its time and given the controversial subject of British war crimes, it could not have been made in the 1940’s.  Another clue that it is not a 1940’s movie is the Japanese are not demonized and the Japanese leader reminds Langford of British actions in colonial Africa.  Touche!  It tells you something about the British public that the movie was a big hit.  And obviously, it got some critical acclaim.  Deservedly so.

“The Young Warriors” was based on the novel “The Beardless Warriors” (why did they change the title?).  Richard Matheson wrote the semi-autobiographical novel about his experiences as an infantryman in the 87th  Infantry Division in Europe in WWII.  He entered combat as an 18-year old replacement.  After the war, he became a writer and wrote the sci-fi classic “I Am Legend”.  He adapted “The Beardless Warriors” for the screenplay.   Universal Studios forced him to adjust the plot so footage from “To Hell and Back” could be used for the combat scenes.  And a comic relief character was shoe-horned in.  The film was distinctly a B-movie and was filmed on the backlot.  It was directed by John Peyser, who directed 27 episodes of “Combat!”   It appeared on a double bill with “Rosie” starring Rosalind Russell.

The movie opens with snare drums.  “This is a story of young men in war.  It takes place during WWII.  It could be “any army… any place… any time…”  Pvt. Hacker (Steve Carlson) arrives as a replacement and is assigned to a squad led by 38-year-old Sgt. Cooley (James Drury).  Eschewing cliches, Hacker is welcomed by the cinematic squad.  One of whom is PFC Guthrie who is the wisecracker.  Another is a slacker.  One has all sorts of health problems.  When they aren’t griping and telling Guthrie to shut up, they do some typical missions, like taking out a tank.  One of the missions is to capture a farmhouse.  They are given this mission so the footage from “To Hell and Back” could be used.  Watch Cooley as he suddenly has a Thompson machine gun.

“The Young Warriors” is an average WWII movie. It is helped by the casting of Drury, who was in the middle of his “The Virginian” fame.  He brings his charisma to the role of the fatherly Cooley.  Cooley is a good role model for squad leadership.  The rest of the cast is nothing to write home about.  Geezers will recognize Daly from “Petticoat Junction”.  His Guthrie is not obnoxiously funny and did elicit some smiles.  Carlson is decent as Matheson’s alter ego Hacker.  He bounced around TV for most of his career, including several episodes of “The Virginian”.  The problem is with the character as Hacker’s arc.  It is not rooted in reality.  He arrives as a replacement, and yet behaves like a veteran.  He is accepted by the vets and even supplants them in Cooley’s pecking order.  After some combat, he becomes a killer (Guthrie:  “He is in love with his rifle.”) and then goes through a Griff from “Big Red One” phase.  Redemption, please.

The movie has a lot of action, although the missions are all easy, except the last one.  If you have seen “Combat!”, you’ll recognize the action style.  The “To Hell and Back” footage is fairly seamless, but if you have seen that movie, it is obvious.  Still, it’s better than CGI.  As far as the pauses between battles, imagine camping out with a Boy Scout troop.

Email ThisBlogThis!Share to TwitterShare to FacebookShare to Pinterest
Labels: The Young Warriors 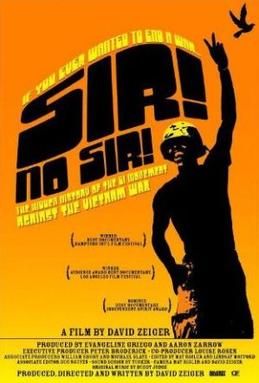 I lived in Japan for three years (1964-67) while my father flew an F-105 out of Thailand.  My Dad continued in the Air Force and then the Air National Guard.  He evidenced no PTSD and willingly talked about the war.  I graduated high school in 1974, so the war and the draft ended before I was of age.  Being a military brat, I assumed I would have enlisted rather than wait to be drafted.  I was even in ROTC for a while at LSU.  My dreams of becoming a pilot were dashed by poor eyesight and I moved on with my life.  I did not follow the war when it was ongoing.  The only thing I knew about the anti-war movement was that my father refused to watch any Jane Fonda movies.  I had no opinions on the war other than a vague feeling that I was a hawk.  Being a history buff, I eventually got around to reading books about the war and formed a more knowledgeable opinion on it.  When I became an American History teacher, I put a lot of effort into my Vietnam War unit.  I presented the facts and let my students decide whether America’s involvement was justified.  Over the years, I have seen many Vietnam War movies and read many books including memoirs.  I was not familiar with this movie until I started looking for more movies to review and share with the Vietnam War Book and Film Club.

“Sir!  No Sir!” is a documentary that was written, directed, and produced by David Zeiger.  (It is available on Netflix streaming.)  It was a labor of love for him.  He dropped out of high school to join the anti-war movement, ending up at Fort Hood.  There he helped organize soldiers who were against the war.  He was involved with the Oleo Strut GI Coffeehouse which became a hangout for like-minded soldiers.  He helped with the Fatigue Press which was an anti-war newspaper.  These experiences encouraged him to become a documentary maker.  “Sir! No Sir!” was not his first.  He had several under his belt, including an exploration of the graduating year for seniors at his high school which became a 13-part series on PBS entitled “Senior Year”.  He made “Sir!  No Sir!” when he realized that of all the documentaries on Vietnam, none focused on the GI Movement.  His movie is still the only movie on the subject of GI resistance.

The movie opens with footage of napalm being dropped on a village (but mostly jungle).  The song “Soldier Boy” plays in the background. The format of the film is interviews with current veterans intermixed with archival footage.  The interviewees are a mixture of men (and a nurse) who refused to go, refused to train others, or refused to follow orders.  The movie leads with their reasons for joining the Army.  It then proceeds to cover the GI Movement in chronological order.  Here's a list of some of the topics:

1.  Nine for Peace in San Francisco

6.  Jane Fonda’s role in the movement (she is interviewed)

10.  Vietnam Veterans Against the War

The movie shows its cards early when the narrator (Troy Garity -  the son of Tom Hayden and Jane Fonda) proclaims “the Tet Offensive revealed that the enemy had widespread support from the public.”  Sounds true to anti-war activists, but actually the offensive proved the opposite.  However, from this shaky start the movie settles into a fairly standard chronicle of the anti-war resistance among the troops.  Clearly, the movie is anti-war, but it lets the interviewees and footage do most of the convincing.  All of the veterans are articulate and they can be persuasive if you come in without a pre-formed opinion.  The narration is not over the top.  Obviously, the film is not balanced.  No hawks were interviewed.  And negative aspects of the movement are overlooked.  For instance, Jane Fonda’s visits to Hanoi are not mentioned.

I have purposely avoided offering my opinion on the GI Movement.  Suffice to say, after my father’s experiences and all my reading and watching movies, I already had an opinion about the war.  I think that to the average viewer, with little knowledge about the war or the anti-war movement, it can be persuasive.  However, it should not be your only source for forming an opinion on the war.  Watch a good neutral documentary first.  I suggest the Ken Burns series or The Ten Thousand Day War.  Or read Stanley Karnow’s or Max Hastings’ histories.

*** By the way, for you war movie buffs, there are two clips.  One is from “Hamburger Hill” where Sgt. Worcester carps about how the public hates GI’s and Rambo claiming he was spit on and called a baby killer when he came home.  (A “myth” the movie refutes.)

Posted by War Movie Buff at 9:23 AM No comments: