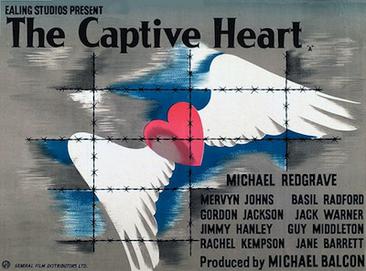 “The Captive Heart” is supposedly the first WWII prisoner of war movie.  This means it started a venerable subgenre.  It is a British film that was directed by Basil Dearden (“Khartoum”).  It was released in the U.S. under the terrible title of “Captive Camp 23” which I would assume consigned it to drive-in movie theaters.  It was a hit in Great Britain.  Not in the U.S.  The movie stars Michael Redgrave and Rachel Kempson who were married from 1935 until Redgrave’s death in 1985.  The movie was filmed partly at the Marlag und Milag Nord prison camp.  One of the co-writers was a prisoner there during the war.  Some of the actors in the movie had been POWs, including Derek Bond and Sam Kydd.  The production had the cooperation of the British Army of the Rhine, which provided soldiers for the camp scenes.

The movie claims that it is “based on fact, but fictional characters”.  A narrator proclaims that the movie is dedicated to prisoners of war.  It opens in France in 1940.  British prisoners are being marched to prison camps.  One of them is Capt. Geoffrey Mitchell (Redgrave) who is actually a Czech escapee named Hasek from Dachau concentration camp.  He has assumed the identity of the dead Mitchell.  The prisoners march into the prison camp whistling and with their upper lips stiff, naturally.  Things get sticky when a Gestapo agent arrives who might remember Hasek.  While the suspense is brewing, the movie intercuts back to England to delve into the soap operaish relationships of some of the men.  There is a love quadrangle to entertain the ladies in the audience.  And of course, the POW camp as summer camp to entertain the men.  Hasek is corresponding with Celia Mitchell (Rachel Kempson) as part of his cover.  Celia wonders why her loutish husband is suddenly the sensitive type.  Nazis make good marriage counselors, apparently.

“The Captive Heart” is middle of the road POW subgenre.  It is well acted by a good cast, which cushions some of the predictability.  The thing that stands out is the balancing of the men and their women.  This tends to be melodramatic, but it is an area that most POW movies do not dwell on.  Some of it is silly, as with most soap opera plots.  The main relationship, which is the one between Hasek and Celia, strains credulity, but it is the other arc to go along with the suspense of whether Hasek will be discovered by the stereotypical Gestapo agent.  This is about the only suspense in the camp as it is one of those POW movies that makes the camp seem to be a fun vacation from the war.  The men play cricket and garden as a pastimes and tunnel as a hobby.  The humor is very British and so is the dialogue.  One of the prisoners says “Bob is your uncle”.

Despite the schmaltzy romance and the coincidences and implausibilities, “The Captive Heart” is an entertaining trifle.  Its attempt to contrast the home front with the camp is commendable.  It would have been more realistic to show the men worse off than the women, but what the Hell.

Posted by War Movie Buff at 1:02 PM No comments:

Email ThisBlogThis!Share to TwitterShare to FacebookShare to Pinterest
Labels: prisoner of war movie, The Captive Heart 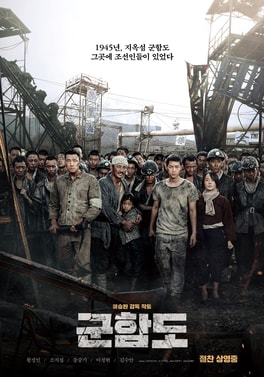 I am a fan of South Korean war movies and have seen most of them.  Most are good and the South Koreans have developed their own distinctive style of staging battles.  They are the best in the world at quality combat porn.  Although most of their war movies are set in the Korean War, they occasionally delve into World War II (like “My Way”).  “The Battleship Island” or “Gunhampo” is one of these.  Although all the characters and incidents are fictional, there was an island off the coast of Japan called Hashima Island where Japanese and Koreans were used as forced laborers.  The movie does not specify the company, but in reality it was Mitsubishi.

The movie opens in November, 1944 with workers being lowered by elevators into a mine where they are whipped to work harder.  Hashima Coal Mine is located on an island off the mainland.  The first half of the movie focuses on several diverse characters.  Lee (Hwang Jung-min) is a Korean bandleader.  He and his daughter (Kim Su-an) get sent to work at the Hashima Coal Mine.  She is thrown in with the “comfort women”.  One of them is a the feisty Oh Mal-nyeon (Lee Jung-hyun).  Choi (So Ji-sub) is a street gangster.  Into the mix comes an OSS agent named Park (Song Jong-ki) who is tasked with infiltrating the island and getting a charismatic patriot out who could unite Korea.  He may not be who he seems to be.  A new, nefarious manager takes over and plans to liquidate the Koreans so they can’t testify at war crimes trials.  Park, Choi, and the others make plans to take over a ship and escape.  This builds to a climactic battle that blows the screen up in typical Korean fashion.

“The Battleship Island” is essentially a two-part movie.  The first part develops the characters and the situation.  It is a bit slow, but it builds well.  We get to know the characters well.  The main ones are intriguing.  Lee’s daughter is a standout.  You don’t usually see strong girl characters in war movies.  On the other hand, the villains are stock.  Their deaths are satisfyingly over the top because you are all out of hisses.  Some of the character development is clicheish.  Choi and Oh start out sniping and end up snuggling.  There is a mole in the mix and a daughter in distress.  While the characters are developed, so is the set.  A lot of effort went into it.  Most of the budget went to a realistic rendering of the actual mine and environment.  It comes off as dystopian.

Surprisingly, the Japanese mistreatment is not over the top.  The movie may invent an insurrection, but it does give a little historical background to the forced labor abuses by the Japanese on the actual island.  There are also the references to comfort women.  Naturally, Japanese conservative media was not pleased with the movie.

I don’t recommend you fast forward to the second part, but the battle is amazing.  The buildup is worth the watch for the payoff.  It is one of the best battle scenes of any Korean movie.  That is saying a lot.  The deaths are graphic and poignant (for the good guys; screw those villains).  If you have seen Korean war movies, like Tae Guk Gi, you will recognize the mixture of quick cuts, slo-mo, and explosive effects.  There is a bombing raid that is total chaos and pyrotechnically exhilarating.  The theme of simple people fighting back is appealing.  Those common people are anchored by two action heroes in Park and Choi.  Female characters don’t just cry and hide.  The insurrection is a team effort.  The movie has a satisfying conclusion.  You’ll be drained by then.

Posted by War Movie Buff at 1:30 PM No comments: 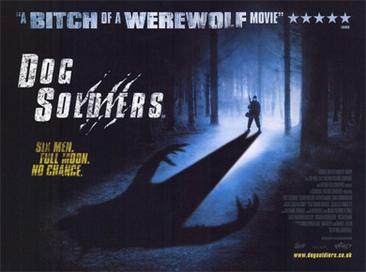 “Dog Soldiers” is a British horror war movie that was released in 2002.  It was written and directed by Neil Marshall (“Centurion”).  It was his first film.  The movie created barely a ripple in theaters and was later premiered on the SyFy Channel.  It is the kind of movie where the first deaths occur in the first minute.

The movie is set in Scotland.  A squad of British soldiers are dropped into a forest for a “harmless exercise, not life or death” against a SAS unit.  Only it will be hard to war game against pieces of men.  There is a survivor – the enigmatically evil Capt. Ryan (Liam Cunningham).  He babbles that “there was only supposed to be one.”  What is he talking about?  Probably not squirrels.  It quickly becomes apparent that we are in the midst of the “who will survive?” subgenre.  They come under attack from something that we see only briefly enough to confirm that they are not squirrels.  The countdown begins when one of the men has a rude encounter with a sharp tree branch.  The really cool Sarge character gets slashed to where he has his guts spilling out.  Boo!  Why does he have to die so soon?  No one could survive that kind of wound unless…  The freaked out Brits are rescued by a woman in an SUV.  She takes them to her isolated farm house because the director had some film left.  We are now at Rorke’s Drift in “Zulu”.  And just like in that movie, they have no phone coverage.  And the enemy makes multiple assaults.  At one point they even break through a wall to escape into another room.  One of the men turns into a werewolf (but off-camera!)  He won’t be the last.  There is a lot of frenetic fighting to hold their fort and the director even manages to get an explosion in.

“Dog Soldiers” is a worthy addition to the war horror movie subgenre.  Marshall directs with panache.  The cinematography throws in some hand-held and slo-mo.  It is a cut above the average creature feature. The editing is outstanding with lots of quick cuts to rev up the action and intercutting during the house assaults.  The action is plentiful and balls to the wall.  The violence is very graphic and appropriately so.  And it saves the best for last.  A real crowd-pleaser.  The special effects are old schoolish as Marshall eschewed CGI.  The werewolves are a combination of animatronics and men in body suits on stilts.  They start off cheesy looking, but later views are more effective.  The movie wisely bleeds out the views.  It reminds one of “Alien” in this respect.

The actors do not take a back seat to the monsters.  It is a nice cast of recognizable British thespians.  The standouts are the antagonists Ryan and Cooper (Kevin McKidd of “Grey’s Anatomy” and “Rome”).  They have a history that involves a dog and a dog neatly fits into the climax of the film.  Ryan makes a great villain and Cooper is rock-jawed sturdy.  By the way, kudos to the dog (Acer).  Good acting, boy!  Emma Cleasby is feisty as Megan the supposedly normal heroic lass.  The dialogue is very British and has some subtle humor that cuts the tension and adds to the fun.  The plot is predictable.  Like the fact that virtually everyone dies.  Oops, spoiler alert!  There are a few nice twists, so try to keep your eyes open.

A friend of mine who loves war movies recently went through a phase where she craved watching some horror movies.  I am not actually a horror movie fan, but if you can pair war with horror, I’m willing to give it a watch.  You would think this kind of melding of B-war movies with B-horror movies would be disastrous, but they can be fun.  This is one of the better ones.