It is a propagandistic war movie from 1943 that praises the Merchant Marine.  It stars Humphrey Bogart as Humphrey Bogart.  It was shot entirely on the Warner Brothers back lot and sound stages.  It was used as a recruiting film for the Merchant Marine and also as a training film.  It was nominated for the Academy Award for Best Original Screenplay.  At one point during the filming, drunken Bogart and Massey replaced their stunt men for a dive from a burning ship. 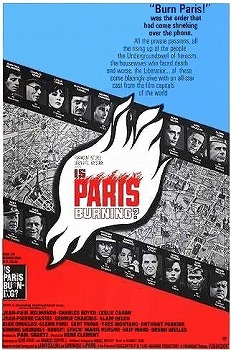 In 1962, “The Longest Day” created the subgenre of all-star battle epics.  It was a huge hit and naturally it spawned imitators like “Battle of the Bulge”, “Midway”, “Battle of Britain”, and “A Bridge Too Far”.  All of those were successes and have their fans, but one movie inspired by “The Longest Day” is mostly forgotten today.  “Is Paris Burning?” was made specifically to try to duplicate the success of “The Longest Day”.  It was based on the bestseller by Larry Collins and Domingue Lapierre.  It was an odd choice because although “Battle of the Bulge” had been made a year earlier, the other battles were available for cinematic treatment, and yet the producers decided the public wanted to see a movie about a city captured without much of a fight.  And captured by French forces more than Americans and British.  The film did well in France, but not elsewhere.  It was a Franco-American production and directed by Frenchman Rene Clement.  The screenplay was by Gore Vidal and Francis Ford Coppola (and three others).  As usual in scripts, more is not better.  Although color was an option, the movie was made in black and white partly because the French government refused to allow red and black German flags with their swastikas to appear in the movie.  The movie relied a lot on the cooperation of the French government, specifically Charles DeGaulle.  DeGaulle was very controlling and in order to use the 180 sites in Paris, he vetted the script.  He insisted the role of the communist underground be downplayed.  At one of the sites, an elderly lady suffered a heart attack after leaving her apartment and walking into a firefight.  Orson Welles did not get along with the director and refused to talk to him.  The theory is Welles was upset that the movie got all the funding it needed when he had trouble getting funding for his projects.  Kirk Douglas was paid $50,000 for one day’s work portraying Patton.

The movie is basically two parts.  The first concentrates on the resistance efforts to take over the city before the Nazis destroy it.  This is complicated because there are two competing underground groups.  The Free French resistance (Alain Delon and Jean-Paul Belmondo) wants to wait and see what develops and the communist resistance (Bruno Cremer) wants an uprising that will seize key buildings.  On the other side, German Gen. Choltitz (Gert Forbe -  “Goldfinger”) has been appointed by Hitler and given the order to destroy the city before it falls to the Allies.   Welles plays Swedish consul Nordling who tries to reason with Choltitz.  He also works to release prisoners who are scheduled to be sent to Germany.  The second half deals with the arrival of French and American troops and Choltitz’s ultimate decision.  A few soldiers are thrown in, but it is a far cry from “The Longest Day”.  The combat is average and there is not much of it.

It is no surprise that “Is Paris Burning?” has been largely forgotten.  I saw it in the 1960’s and had not seen it since.  In the last few years I have attempted to view it (without buying the DVD) and had not been successful until recently.  It was not worth the wait.  It is much too long and that is coming from a war movie lover who usually does not care about length.  The intermission (remember those?) comes at the point where a good movie would have ended.  Length is common in the all-star epic subgenre, but boredom is not.  The plot is not compelling.  This is partly due to the fact that any informed person would know that Paris is not going to burn.  This would have been especially true when the movie came out.  I would love to know how this movie was green-lit.  The cast may be all-star, but only if you are familiar with French actors.  The Americans are mostly cameos, like Douglas as Patton.  Welles gets a lot of screen time, but his heart is not in it.  There is no villain to hiss at as Choltitz is one of those good Germans common in films of that era.  The dual resistance arc is confusing because it is hard to tell them apart.  The movie is well-made with nice cinematography from Marcel Grignon, who was nominated for an Academy Award.  The movie blends footage well, another reason for it to be in black and white.  The movie was also nominated for Best Art Direction.  Maurice Jarre was nominated for a Golden Globe for his score.

As far as accuracy, the movie passes the test.  I have not read the book, but my cursory research shows that it gets the basics right.  Choltitz became known as the Savior of Paris (although his expressed reasons for not carrying out Hitler’s orders have come into question since the movie).  The movie conforms to Choltitz’s explanation that he could not condone the destruction of a such a cultural city and he had come to believe that Germany had lost and Hitler was insane.  The conflict between the Free French resistance and the communist resistance is accurate.  Nordling’s role is well done.  He does deserve a lot of credit for negotiating with Choltitz.  The events did start with a general strike led by the police.  The communists did take the lead in escalating this to an armed uprising.  The Free French did join in.  The fighting did center on the Prefecture of Police and Cholititz’s forces were unable to capture the building or put down the uprising.  It is true that Eisenhower had to be convinced to make Paris a target.  The scene with Douglas as Patton was apparently thrown in to get the actor and general into the movie.  Patton was against sending Leclerc in, but it would have been much better to show the confrontation between Eisenhower and DeGaulle where the French leader threatened to order Gen. Leclerc and his 2nd Armor in on his own orders.  Ike relented and the movie accurately depicts the entry of the 2nd Armored and the American 4th Division.  Choltitz did violate express orders to implement the demolition of bridges, etc.  Some historians believe now that he was mainly motivated by concern for the treatment of himself and his family after the war.  The movie was realistic in not enhancing the street fighting as the Germans did not put up much of a fight.  The celebratory aftermath of Choltitz’s surrender needs no spoiler alert.