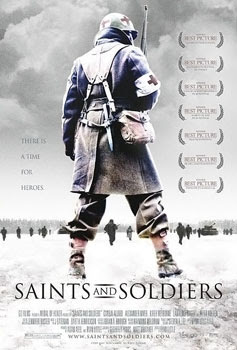 “Saints and Soldiers” is “based on true events” centering on the Malmedy Massacre in the Battle of the Bulge.  It was a very low budget film (less than $1 million), but did well at film festivals winning numerous awards.  The cast is as low rent as you can get.  It was released in 2003.  It is the rare war movie that has overt religious overtones.
The movie opens with the exhumation of bodies at Malmedy and then flashes back three weeks to the massacre.  The massacre breaks out when one of the Americans tries to escape and is shot.  Another G.I. grabs a gun and shoots a captor and the Germans open fire with machine guns.  (This is uncomfortably close to the way the S.S. defendants excused their actions at their trial.)  Some of the men successfully run away, but over 80 of the around 120 are killed and some of the wounded are executed with a bullet to the head.
The movie follows the quartet of Deacon (Corbin Allred), Gunderson (Peter Ashe Holden), Kendrick (Larry Bagby), and Gould (Alexander Niver).  Deacon is shell-shocked from an incident where he accidentally killed a family.  He is religious and often reads a book that turns out to be the Book of Mormon.  He gets into some interesting discussions with the atheist medic Gould.  Gould is from Brooklyn (of course, since this is a small unit movie).
The trek back to American lines is fraught with peril, naturally.  They spend some time in the floor space of a home when Germans arrive.  They hook up with a British pilot named Winley (Kirby Heyborne) who has valuable information that is needed back at headquarters.  They head out to “Saving Private Ryan” style music.  The soldier talk is realistic and helps with character development.  Kendrick and Winley dislike each other so we have the required dysfunctionality.
They stay at the home of a French family.  Winley impatiently leaves in a snow storm. Germans arrive again.  When they attempt to rape the woman, Deacon shoots one, but the other escapes (but Deacon never misses, so what’s up?).  They can’t track him (in the snow?), but Winley arrives with the German in tow.  Deacon recognizes him as a fellow Mormon named Rudy from a pre-war mission.  What a small world!  Good thing Deacon sometimes misses.  Deacon sets Rudy loose in exchange for directions because it’s the Christian (I mean Mormon) thing to do.
Suddenly Germans open fire and Gunderson is killed.  A fire-fight ensues with SPR type graphics.  The grenade explosions are especially cool.  After frantic evading, they run into Rudy who shows them a jeep they can use.  They drive through no man’s land with both sides trying to kill them.  The jeep crashes and Deacon stays behind to give covering fire.  Gould and Winley make it, but Deacon does not.  Winley’s information, as we all know, allows the Allies to win the Battle of the Bulge.  Gould takes Deacon’s Book of Mormon.
The no name cast acts well.  The movie also makes good use of numerous reenactors and authentic weapons.  The action scenes are surprisingly good considering the low budget.  They are obviously influenced by SPR.  The cinematography is fine.  The setting is snowy (it was filmed in Utah) which adds to the atmosphere, but is inaccurate as to the Malmedy Masssacre which was not snowy.
The religious theme of the movie will not be for everyone, but I did not find it overbearing.  Although the movie was produced by a Mormon company and the ending seems to be aimed at recruiting converts, you have to listen carefully to catch that Deacon is a Mormon.  Most viewers will assume he is simply a Christian and that the book is a Bible.  Gould represents the atheist view gamely.
As far as accuracy, the movie is pretty commendable.  The main characters are fictional, but some of the events are authentic.  There was an incident when a small group hid in a basement while Germans dined overhead.  there also was an account of an American who missed a German soldier and then later when he was captured, it turned out they were if the same faith.  The Malmedy Massacre is fairly close to the real thing.
The movie does not belong in the 100 Best War Movies list, but it is well worth watching and you have to admire what they were able to produce for less than $1 million.
GRADE = B- 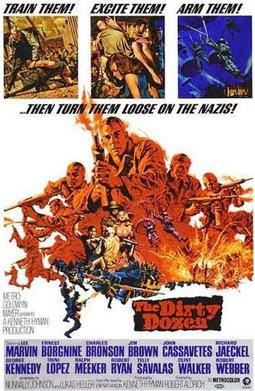 BACK-STORY:  “The Dirty Dozen” created the template for an entire genre of motley crew, suicide mission movies.  It’s influence has been substantial.  The movie was released in 1967 and was part of the wave of more realistically gritty war movies like “Patton”.  Director Robert Aldrich adapted it from the bestselling novel by E.M. Nathanson, but made substantial changes.  The film was made in England and took seven months to complete.  Production included the construction of a chateau that was 240 ft wide and 50 ft high, surrounded with 5,400 sq. yds. of heather, 400 ferns, 450 shrubs, 30 spruce trees and 6 weeping willows.  It turned out to be so substantially built that it could not be easily blown up so they had to construct a flimsier section for the climactic scene.
The cast was all-starish.  The studio wanted John Wayne for the Reisman role,  but Aldrich wisely insisted on Marvin (Wayne made “The Green Berets” instead).  Jim Brown was still playing football, but when the owner of the Browns gave him an ultimatum – football or moviemaking – he announced his premature retirement.  A huge mistake admitted by the owner later.  Trini Lopez was cast because he was a hot pop singer at that time (“Lemon Tree”).  When he decided his singing career was more important than the completion of the movie, his character suffers a premature death.  The dozen actors were supposed to be divided between the stars and the “who the hell is that” group (known as the Back Six).  However, one of the Back Six broke out to become a rising star.  When Clint Walker refused to do the impersonating the general scene, the unknown Donald Sutherland was tabbed and parleyed it into higher billing and a role in a little film called “MASH”.  Many of the cast were WWII veterans:  Marvin (Marines – wounded on Saipan), Savalas (Army), Bronson (Army), Borgnine (Navy), and Walker (Merchant Marine).
The movie was a huge hit with audiences and with some critics.  It was nominated for four Oscars;  Best Supporting Actor (John Cassavetes), Editing, Sound, and Sound Effects (won).
OPENING:  Major Reisman (Lee Marvin) is treated to a military execution.  The prisoner was condemned by a court-martial and is hanged.  The scene is short, but impactful.  This will not be an old-school WWII movie.


WOULD CHICKS DIG IT?  Surprisingly, many did.  I guess we would classify them as “bad girls”.  Seriously, the cast is very manly.  There is humor.  The violence is not too bloody, although it was pretty intense for the 1960s.  The language is pretty tame.  It’s not really a date movie.  Guys will enjoy it, but might regret exposing their girl to so much virileness.