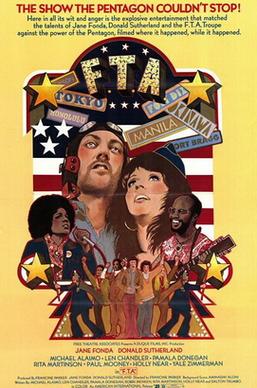 By 1972, the anti-war movement was in full swing in America.  The college kids and hippies got most of the news coverage and the mention in high school textbooks, but there was also the GI Movement which consisted of soldiers and Marines who opposed the war.  This movement is the subject of the documentary “Sir! No Sir!”.  That movie acts as a companion to “F.T.A.”.  This doc was directed by Francine Parker who was one of the first females in the Director’s Guild of America.  “F.T.A.” was her most significant film.  Part of that was due to the controversy it stirred up.  It was yanked from theaters soon after its release.  Some accused the Nixon Administration of pulling strings.  Coincidentally, the premiere was the same week Jane Fonda made her infamous visit to Hanoi.  Ms. Fonda was a co-producer with Parker and Donald Sutherland.  Most people don’t associate Sutherland with the anti-war movement, but before Fonda’s trip made her the most despised dove in America, he was something of a partner, as the movie makes clear.

F.T.A. Shows were a direct reaction to Bob Hope’s USO shows.  We now remember Hope as a great American who selflessly traveled to combat zones, starting in WWII, to entertain the troops.  An entire generation associates him specifically with the Vietnam War because those specials were televised.  What many don’t know is by the 1970’s the soldiers were beginning to sour on his pro-war vibe.  The jokes were ringing hollow.  There was an opening for an anti-Hope show.  The F.T.A. got its name as a play on the Army’s recruiting slogan: “Fun, Travel, Adventure”.  The slogan by this time was unintentionally cringe-inducing and ripe for satire.  Technically, F.T.A. stood for “Free the Army”.  But there was a song in the show called “The Lifer’s Song” (or the “F.T.A. Song”) that G.I.s were encouraged to substitute an obscenity for the word “free”.

The film begins with an introduction from Jane Fonda.  I’m guessing this will be as far as most vets will get.  There is some background information on the G.I. Movement.  The bridge between that and the F.T.A. Shows were the coffeehouses off bases where soldiers would get together to commiserate, gripe, and entertain themselves.  And protest.  Howard Leavy, one of the more famous figures in the movement (he refused to continue to train Green Berets), had the idea of getting Jane Fonda to tour the coffeehouses and then the tour was expanded to include the bases of the Pacific Rim.  The film follows the tour and includes several of the skits and songs.  One of the songs is “My Ass is Mine”.  There is a definite anti-officer theme to the shows.  Other songs are “Soldier, We Love You”, “We Will Not Back Down”, “Move on Over”, and “Save Our Soldiers”.  You get the drift from the titles.  The skits are what Fonda described as “political vaudeville”.  They pointedly avoided the sexism and pro-Americanism of the Hope shows and tapped into women’s lib and the anti-racism of the 70’s.  There is a long segment on black grunts protesting against discrimination and having to fight against other non-whites.   Along with the shows, there are interviews with soldiers in the G.I. Movement and footage of Vietnamese civilians disputing that the American army was there for their benefit.  It’s very one-sided, as you would expect from a propaganda film.  The only pro-war views are yelled out by some soldiers at one of the shows and they are quickly escorted out.  The movie concludes with Sutherland reading from “Johnny Got His Gun”.  If you are not familiar with one of the most anti-war novels ever written, the wounded doughboy has been left with no arms or legs, or ability to speak.  He wants to be put on display as a cautionary tale about war.  If you are still watching, you’ll have to agree it is a fitting end to the doc.

If you are interested in learning about the F.T.A., this is the film for you.  And if you are interested, I assume you were against the war.  In which case, the film will cause you to put those old love beads on for nostalgia.  However, most of the people in this group will not be in that group.  I still recommend the movie because it is informative about the opposing side.  Plus, you’ll be able to prove your open-minded.  Or that you can still foam at the mouth.  All kidding aside, can’t we all agree that the truth was somewhere between LBJ and Jane Fonda?

The movie had been thought lost, but it has been recovered by David Zeiger (the director of “Sir, No Sir”) in 2009.  It is now playing on Netflix (as is “Sir! No Sir!”).  Oops, did I just cost Netflix some subscribers?

“The Iron Triangle” is a lower tier Vietnam War movie.  It was directed by a lower tier director – Eric Weston.  What sets it apart from most in the subgenre is it attempts to give both sides.  It purports to be based on the diary of a Viet Cong soldier named Ho (Lem Whatley).  The title refers to “the bloodiest corner of the Ho Chi Minh Trail”.

The film opens with a search and destroy mission on a village led by a Capt. Keene (Beau Bridges).  There is a small firefight so we can see two explosions.  Moving through the jungle a sniper (Ho) kills two grunts.  He takes a Thompson off one of them.  Back at camp, a party member named Khoi (Jim Ishida) wants the Thompson.  Their commander Capt. Tuong (Haing Ngor) finds in favor of Ho.  This dynamic is mirrored by Keene’s relationship with an ARVN named Duc who is the torturing prisoners type.  The movie may want to be grey overall, but it is very black and white in its relationships.  The opposing sides come together when Ho captures Keene.  They bond.  They negotiate a peace treaty that ends the war.  Not really.  It’s more predictable than that.  But it does finish with a big set piece combat porn battle.  Someone finds a diary.  “On the other side of the gun was a man, like me.”

You have to give “Iron Triangle” some credit for giving both side’s viewpoints, although strangely Keene and Ho do not discuss the war.  The movie does not take a side, it saves good guy/bad guy for the characters.  The characters are stereotypes with the villains being caricatures.  It doesn’t help that the acting is pedestrian.  Bridges appears to be uncomfortable with this soldier thing.  Ngor is wasted in a minor role.  He was only one year older than Bridges, so it is perplexing why he was not given the Ho role.  He should have demanded it because the most interesting character.  He’s no saint, but considering his father was killed by the ARVN as a suspected VC, he has reason to be a killer.  The relationship between Ho and Keene is unoriginal and has been seen many times in war movies.  Enemies bonding is a way to make an anti-war movie with the message that both sides are bad, and good.  This one works fairly well.  The movie intercuts between the two camps.  There is dysfunction in each.  Both sides have ass holes.  The dialogue is not terrible, but the GI slang is faux and the VC talk English.  The movie was not interested in earning cinema cred.  And its audience would not have tolerated it.  The action will satisfy combat junkies.  Junkies who don’t care about realism.  There’s lots of hip-shooting and no reloading.

If you are interested in Vietnam War movies, and are planning on watching all of them, you’ll get around to this one.   Maybe you have already and forgot it.  It is forgettable.  That’s a shame for a message movie.

“Fireball Forward” is “son of Patton”, according to producer Frank McCarthy who produced both.  That must have been a quote he used when selling the script.  He got a competent director, so the finished product was not Marvin Chomsky’s fault.  He later did “Inside the Third Reich” and the miniseries “Holocaust”.  Most of the blame has to go to screenwriter Edmund North, who shockingly also co-wrote “Patton” (along with Francis Ford Coppola).  And the paltry TV movie budget.

Gen. Barrett (Ben Gazzara) is a decorated veteran of D-Day.  His reward is to be given command of the “disaster” 14th Division.  He is told to kick some ass.  Like Patton did when he took over II Corps in North Africa.  The outgoing C. O. is not incompetent and takes it well.  He believes it’s a hard luck outfit.  Like Col. Davenport in “Twelve O’Clock High”.  There is a marquis named Duval (Ricardo Montalban) attached to the unit.  The movie forgoes the expected shaping the ship and jumps right into a battle.  After giving us a taste of combat via footage from “Patton”, we learn that Barrett is no Patton.  He is strict, but caring.  Instead of slapping a coward, he coddles him.  The movie shifts from war movie to mystery as the Germans seem to know their plans.  If you can’t figure out who the mole is, don’t task yourself with “Murder She Wrote”.

This is a very made-for-TV movie.   The budget must have been a tenth of “Patton”.  The same fraction could be applied to the salaries of the leads.  But the result was not Gazzara’s fault.  He does a decent job with a poorly written role.  The rest of the cast is potential series regulars like Eddie Albert and Dana Elcar.  Anne Francis is shoe-horned in as the requisite female.  Screenwriter North bent over backwards to contrast Campbell with Patton, although he sets him up to be.  Gazzara brings his usual charisma, but the character is inconsistent and unrealistic.  He smiles too much for a general who has a steaming pile dumped in his lap.  The whole arc between Campbell and Collins (the unslapped battle fatigue victim) comes off as a “here’s what Patton should have done” tutorial.    The movie makes a big mistake continually reminding the viewers of “Patton”.  The footage and the music just made me sad.  The movie was a pilot for an unsold series, so clearly it was trying to tap into the popularity of the movie.  It has the feel of an episode of a television series.  Like an episode of “Twelve O’Clock High” where somehow the Germans know where they are going to bomb ahead of time.  As a pilot, it should have concentrated on Campbell ruffling feathers and shaping up the unit and then the series would pick up with the weekly crises.  McCarthy clearly had no confidence the audience would have that kind of patience.

The best thing about “Fireball Forward” is its name.  That is the only thing that kicks ass in the movie.  Gen. Campbell certainly doesn’t.  We’ll never know, but it seems clear that the series would not have been another “Twelve O’Clock High”.

Posted by War Movie Buff at 1:21 PM No comments: