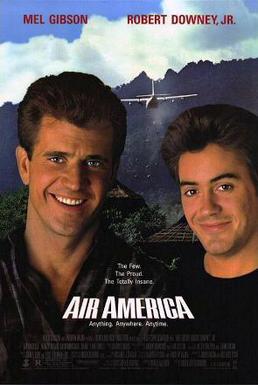 When it was proposed in 1985, the idea was for “Air America” was meant to be the first Vietnam War comedy.  It was to star Sean Connery and Kevin Costner.  Funding took so long that the two moved on (Connery to “The Hunt for Red October” and Costner to “Dances With Wolves”).  The film was directed by Roger Spottiswoode (“Under Fire”).  It was based on the non-fiction book by Christopher Robbins.  The movie went over budget at $35 million.  Although considered a bomb, it actually made over $57 million.  Some of the budget was a $7 million check to Mel Gibson.  Robert Downey made the movie for the pay check and because he wanted to work with Gibson.  Downey did not enjoy the shooting in Thailand.  The production was marred by two earthquakes and a typhoon.  The movie that had a 500-member crew who moved between 44 locations in Thailand, London, and Los Angeles.  26 aircraft were rented from the Thai air force.

Air America was the name given to the CIA’s effort to intervene in the conflict between the non-communist government and communist rebels in Laos.  It is set in 1969.  The civilian pilots fell into two categories:  those who made flights delivering supplies to villagers as part of a “hearts and minds” effort and those who ran guns and opium.  Mel Gibson’s Gene Ryack is the latter and Robert Downey’s Billy Covington is the former.  The movie opens with an Air America plane dropping bags of rice that plummet through the roof of huts.  That same plane is shot down by a peasant firing a rifle.  This “golden BB” causes the plane to crash, killing everyone on board.  The movie goes from broad physical comedy to tragedy in seconds!  Cut to Covington as a traffic chopper pilot.  He’s crazy, which makes him perfect for Air America.  He gets recruited with the promise that he will be able to do the kind of flying that just got him fired.  When he arrives in Laos (“we’re not here”), he meets the cynical Ryack.  Ryack has a plan to accumulate a cache of weapons and then sell them on the black market so he can retire.  Air America is in bed with a corrupt Laotian Gen. Lu Soong (Burt Kwouk!).  Covington is going to make his mission to take down the general, especially after his soldiers rescue the opium and not Ryack/Covington after a crash.  Speaking of crashes, the movie is basically a sequence of crashes.  After one of them, a rescue chopper is shot down!  The movie is crash porn.

“Air America” is an uncomfortable blend of comedy and action.  The comedy is not black enough and is overwhelmed by the drama which includes the deaths of several of the characters.  And the action lacks suspense, even in the crashes.  The movie has lots of explosions, but they are of the ridiculous gasoline variety.  There are more crashes than laughs, so the movie was deceptively marketed as a comedy.  It is not the first comedy about the Vietnam War.  “The Boys in Company C” came out in 1978 and if you want a movie that is clearly a comedy, “Good Morning, Vietnam” was released in 1987.

The cast works hard and is not to blame.  Gibson and Downey do have some chemistry and the movie tries hard to be a buddy film.  In fact, it works best as one.  Nancy Travis is wasted in the role of an aid worker.  All of the main characters are stereotypes.  Ryack is the cynical veteran who is corrupted by the system.  Covington is the daring do-gooder.  Lu Soong is the villainous corrupt general.  The movie is rife with cliches.  The Air America personnel party like journalists or mercenaries (which they basically are).  Ryack gets a redemption arc that is very predictable

“Air America” is a dud, but it does have its strengths.  The stunt flying is excellent and some of the stunts were so daring that they were nixed by stunt pilot.  Spottiswoode was able to find some real Covingtons to do them.  Another reason to watch is the soundtrack of classic rock.  Now that I think about it, you might want to skip the movie and just buy the soundtrack.  By the way, the movie did come under some criticism for having songs that were not around in 1969.  Personally, I don’t care as long as the song fits the scene.

Surprisingly, several of the characters are based on actual people.  Gen. Vang Pao led CIA-supported forces against the communist Pathet Lao.  He ended up immigrating to the U.S. after Laos fell.  I doubt he went to see the movie.  Air America was a collection of cargo planes that the CIA clandestinely used to support non-communism from 1950-1976.  It did support Gen. Vang Pao and it did get involved in drug smuggling.  Or turned a blind eye to it, according to some historians.  On a positive note, it did some reconnaissance work for the American army and did some search and rescue for downed pilots.  Covington and Ryack are not based on real people, but did represent the two basic types of employees.  The fact-finding Senator Davenport was based on Sen. Stuart Symington.  Symington made a trip to Laos to check out the CIA operation and later expressed disgust at the activities Air America participated in. Major Lemond was inspired by Maj. Richard Secord who was in charge of Air America during the Secret War in Laos.  If you want to learn about Air America from a feature film instead of a documentary, “Air America” will give you the gist of it.  Just don’t expect to laugh it up. 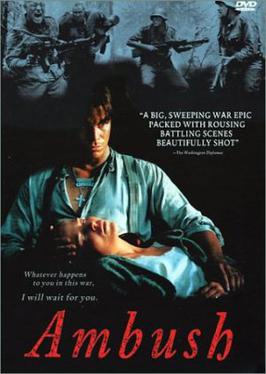 “Ambush” is a Finnish film based on the book by Antti Tuuri.  Tuuri’s book entitled “Road of Rukajarvi” (which is the original title of the movie) is non-fiction, but apparently the movie takes a lot of liberties with the truth.  It stars Peter Franzen and Irina Bjorkland, who are husband and wife.  The film won seven Jussi Awards (the Finnish equivalent of the Academy Awards) including Best Picture and Best Director for Olli Saarela.

“Ambush” is set in the “Continuation War” which was the continuation of the Winter War.  In the Winter War, the Soviet Union invaded Finland and took some of its territory.  The “Continuation War” (1941-44)  was Finland’s chance for payback as it attempted to regain the territory it had lost in alliance with Nazi Germany.  Lt. Eero Perkova (Franzen) narrates the actions of his platoon.  They are behind the lines waiting for a mission.  His unit is part of the “bicycle infantry”.  How often do you see soldiers on bikes in war movies?  Perkova and his fourteen men are ordered to plug a hole in the Finnish line and scout out the Russian position.  A huge task for a small force!  Welcome to the Finnish version of a “lost patrol” movie.  Before they pedal off on their suicide mission, Eero is reunited with his fiancé Kaarina (Bjorkland).  She is with the women auxiliaries.

Perkova’s unit moves up to a village and are being shadowed by Russian partisans.  The whittling down begins.  Who will survive?  If the movie is realistic, not many.  This unit is supposed to be veteran, but they don’t behave like it.  At one point, they all sit down for a meal.  No one is on guard duty!  Also, for veterans, they are pretty morose over their losses.  Tactically, they lack fire discipline.  Perkova is a fairly good leader, but he seems to lose his humanity as time goes by.  Their adventures build to the big slo-mo combat scene where the remainder of the platoon has to cross enemy lines to return to their side.  This involves a gonzo charge through a forest with them mowing down Russkies without bothering to reload.  None of them should survive this.  Should.

“Ambush” is a big waste of time.  It wimps out on most of the plot developments.  It sets up a cat and mouse scenario with the partisans, but does not deliver.  It is not very suspenseful and most of the deaths are predictable.  Don’t go in that house!  There are long stretches where nothing happens.  That is certainly realistic for warfare, but does not make for an entertaining war movie.  It saves its most unrealistic moment for the ending.  It’s not “All Quiet on the Eastern Front”.    The acting is average and so is the dialogue.  There is just nothing special about the film.  It is hard to see why it won the Best Picture award in Finland.  I feel this is a damning reflection on the quality of Finnish movies.  Well, Finnish movies made in 1999, anyway.

Should you read it?  If you have seen “Talvisota” and liked it, “Ambush” is something of a sequel.  Not being a big fan of “Talvisota”, I do not recommend either of them.  Unless you are a big fan of Finland at war.

Email ThisBlogThis!Share to TwitterShare to FacebookShare to Pinterest
Labels: Ambush 1999, The Continuation War

A trio lands on a beach on Luzon in the Philippines in 1944  /  They move through the jungle to reach a hut  /  Craig (pop singer Jimmy Rodgers) doesn’t take the shot!  /  jungle sounds  /  they hook up with Paco and his mix-gendered guerrilla band  /  mission:  see if the Japs are setting a trap for the invasion  /  Paco is a hard-ass and not an American puppet -  interesting character and a much better actor than Rodgers (but he probably does not sing as well)  /  crossing a river by rope  /  they reach a village  /  Packo’s wife and kid were killed by American mortar fire  /  Japs threaten to execute kids if they aren’t turned in – shot of adorable kids  /  “Combat!” type music featuring bongos /  kids sing an adorable song as the guerrillas sneak into a village  /  small battle, nothing special, no blood  /  Paco has a plain girlfriend  /  Burnett (Jack Nicholson!) and Jersey (John Hackett!) are BFFs, they have a philosophical discussion of killing humans in war  /  torture scene -  something involving fingers  /  Craig woodenly takes umbrage about the killing of prisoners   /  meet up with scene-chewing “pirate” rebel named Raymundo – he sabotages the radio – why?  because he’s a dick?  /  they go to a Japanese signaling station  /  Craig is able to stab a guard so he’s over that incident that where he couldn’t take the shot – thank goodness  /  blood splatter from neck slash!  /  no real problem getting to radio  -  actually it’s a telegraph  /  discovered and pinned down  /  Burnett is killed by a bullet that leaves no hole  - the rest get out with no difficulty;  one-third death rate for this commando raid- a little low for the subgenre  /  footage of American invasion  /  the end

ANALYSIS:  “Backdoor to Hell” is a low budget black and white B-movie.  Nicholson was friends with Hackett and director Monte Hellman and the trio wrote the screenplay on the ship on the way to the Philippines where the film was shot on location.  The Philippine military cooperated.  Rodgers was recruited as the star because he was a popular singer and he co-financed the movie.  He had a #1 hit with “Honeycomb” in 1957 and also sang “Kisses Sweeter Than Wine”.  He was a good singer, but terrible actor.  Nicholson really does not evidence future stardom here.  Surprisingly, the standout is Conrad Maga as Paco.  It was his only movie. The film could have used a sexy Filipino guerrilla babe.  Kudos to the casting director for casting against type?   The plot seems like it was written on a ship.  The mission is boring and there is little suspense.  The combat is average for a movie like this.  The dialogue is just blah, not embarrassing.  The movie is not a cult classic.  It’s just a bad movie, but at least it’s only one hour and fifteen minutes.

Posted by War Movie Buff at 2:37 PM No comments: