SHOULD YOU READ IT? "Black Book" 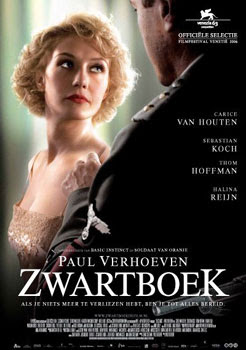 “The Black Book” is a Dutch movie about the Resistance during WWII. It was directed with his usual flair for sex and violence by Paul Verhoeven. It is indisputably the greatest war movie to come out of Holland. It was released in 2006 and is well-respected among critics and audiences. It does have its haters, however.
﻿﻿﻿﻿


The film is the fictional story of Rachel Stein (played by the strikingly beautiful Carice van Houten). It is set in Sept., 1944 with the Allies in the process of liberating Holland. After her Jewish family is slaughtered in an ambush by a German patrol boat and she is the sole survivor, she hooks up with a Resistance cell led by Gerben Kuippers. Rachel changes her name and her hair color (all of it, as the movie titillatingly shows) so she can go, literally, undercover in Gestapo headquarters. She seduces an S.S. officer named Muntze and then they proceed to fall in love even though he deduces that she is Jewish (but does not realize she is a spy, at first). The movie manages to fit in some singing by van Houten which fits her characters previous career as a singer. During one of the parties she recognizes the number two man as the evil Nazi (Franken) who led the massacring of her family.

Rachel (Ellis) is quite the plucky heroine. She plants a bug in the headquarters. She helps chase down the Dutch collaborator who set up her family. Things turn sour for her after a raid on the basement of the headquarters to rescue Kuippers' son from torture fails bloodily because of a mole and she is cunningly fingered by Franken by way of the bug. Now she is wanted by the Resistance as a traitor.

Muntze is also on the run because he is too humane for an S.S. officer. He tried to make a deal with the Resistance to stop reprisal and counter-reprisal now that the war is lost for the Germans. He and Ellis eventually get together, but they do not live happily ever after. The movie now becomes a whodunnit and a chase movie rolled into one. Turning off your brain would be advisable at this point because much of what occurs in the last hour is unrealistic and some of it draws unintended laughs. For example, Ellis is overdosed with insulin by the “guess who” villain, but when he or she goes on the balcony to the acclaim of the crowd, Ellis scarfs down a “we’ve been liberated by the Allies” chocolate bar to miraculously save herself. By the end of the movie everyone who deserves to die is dead, including some who did not deserve to die.

When I finished watching this movie my first reaction was negative. The magical chocolate bar and the firing squad death of one of the main characters strained credulity beyond my tolerance. While the insulin scene is just your typical movie escape from death against logical odds, the execution of a German officer by German firing squad after the German surrender seemed at first glance to be absolutely ridiculous and inexcusable! I was not the only one who protested this historical inaccuracy, but a little research found a germ of truth in it. It seems the Canadians did allow the Germans to execute two deserters after their jurisdiction should have ceased. However, the movie character is not a simple deserter, but instead a German officer who undoubtedly would have been kept alive for interrogation value alone.


This is also the kind of movie that when you look back at it, you see numerous big holes in the plot. You realize what amazing coincidences had to happen to advance the story. Also, to fool you as to who the real traitor is, he or she does things that are not consistent with the character.

With all that said, I recommend you read this movie. Enjoy it for its entertainment, not its historical accuracy. If nothing else, it will keep you thinking about its flaws for days after. Few movies have that kind of impact for good or ill. Oh, and did I mention that van Houten is hot and often unclothed?