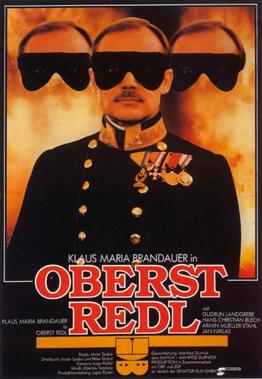 Note:  This review is appearing out of order because I had a hard time finding it.  Surprisingly, I ended up watching it on You Tube.

BACK-STORY: “Colonel Redl” is a Hungarian film directed by Istvan Szabo. It was the second in a trilogy and came after the acclaimed “Mephisto”. It is based on a British play by John Osborne entitled “A Patriot For Me”. The movie won the Jury Prize at Cannes, was chosen Best Foreign Film at the BAFTAs, and was nominated for Best Foreign Film at the Oscars. The movie was hardly shown in America and made just $2,357 in one week at one theater.


OPENING: The movie is set in the Austro-Hungarian Empire pre-WWI. It is “not based on a true story”. Alfred Redl is a boy from a lower class family that is heading off to a military school. The training is typical with Redl and another cadet having to run a gauntlet after breaking some wooden rods in sword practice. Surprising for macho teenage boys, the whacks are half-hearted.

SUMMARY: Redl develops a friendship with the son of a baron, Kristof Kubinyi (Jan Niklas). He visits his friend’s estate for a fish out of water scene. He also strikes up a relationship with Kristof’s sister Katalin (Gudrun Landgrebe). She will reappear throughout the film as a sounding board and to give him advice. They would make a good pair except that Redl is a closet homosexual. Redl deals with this social taboo by going through the motions. He visits a brothel, but can only perform after witnessing Kristof in another room.  That same night another officer plants a big smooch on Alfred, but the prevalence of homosexuality in the officer corps is not going to be explored.

The turning point in Redl’s education occurs when he protects Kristoff from punishment by ratting out another student for a prank. Although he self-flagellates with “I’m a treacherous peasant”, he discovers that being a loyal stoolie is good for his career. He is not quite a Judas because he sincerely worships Emperor Joseph and is willing to fight anyone who disses His Majesty. A telling moment occurs when he turns down permission to go home for his father’s funeral because he does not want to miss a celebration honoring the Emperor. This guy has really drunk the Koolaid.

Redl rapidly rises to Captain. It is implied that he benefits from sucking up to his superiors. Meanwhile, Kristof languishes because he refuses to play political games. For instance, he fights a duel with flintlock pistols in which he shoots his opponent dead. Significantly, Redl is reprimanded for being a second in the duel, but gets promoted to Major.

Now in a position of power, Redl is able to implement his desire to clean house. He accuses the officer corps of wining, wenching, and not properly supervising their men. He might be meant to come off as a martinet, but I found his rant to be reasonable. He breaks with Kristof when he criticizes the Emperor as being senile. Redl literally leaps on him and they have a silly fight. This disagreement comes from out of the blue and is unrealistic. Later, Kubinyi is transferred because of disciplinary problems.

The movie now begins to chip away at Redl’s façade. A strange visit from his sister is thrown in to reveal that Redl is a closet Jew and uptight about it. He is decorated by Franz Ferdinand (Armin Mueller-Stahl) who appreciates his blind loyalty and ability to turn on his fellow officers. What better person to head Military Intelligence which the Archduke envisions as an organization to spy not on the enemy, but on his own officer corps? Redl relishes the role and in a telling scene he reads his own file and finds himself accurately labeled as ambitious, a social climber, and a monarchy lover. He adds “insincere” to the list.

Redl is efficient in his ferreting.  He interrogates potential rats and uses filmed surveillance. When Ferdinand longs for a spectacular shake-up of the army, Redl suggests a public treason trial. The Archduke likes the idea, but then ticks off a long list of ethnic groups that cannot be targeted! Redl:  Who can I target then? Ferdinand:  I suggest someone from your insignificant group. Someone like you.

Redl seems to have found the perfect victim, but in a ridiculous scene he manages to commit suicide. Oops, there goes the show trial. How about Kubinyi, his former friend? Surprisingly, Ferdinand refuses and asks Redl if he is evil. It seems the Archduke has already decided who his patsy will be.

Redl meets a beautiful young man at a ball and decides that considering the piranha-infested waters he is swimming in, now would be a good time to abandon chastity! In a squirm-inducing scene, they seduce each other without words. Gag! When Redl realizes he is being set up he threatens to shoot Alfredo, but lets him go after reciting a list of military facts to put the noose around his own neck.

CLOSING: Ferdinand hosts a conspiracy meeting where Kubinyi suggests Redl be allowed to commit suicide. Strangely, Ferdinand agrees so long as Kubinyi hands him the revolver. What happened to the show trial they were looking for and how is this different than the other suicide which was deemed unacceptable? Surely, the trial of the head of Military Intelligence would make the splash desired by Ferdinand. Anyway, Kristof delivers the gun and the wink, wink. You know all those movies where the soldier stoically bites the barrel? This is not one of them. It might be more realistic for the human to vacillate, but the movie comes off silly with Redl literally running around the room. The movie has a happy ending as Ferdinand is assassinated and WWI begins.

WOULD CHICKS DIG IT? Since this is not really a war movie and is more of a character study, it should appeal to many females. There is certainly nothing graphic or violent about it. The back-stabbing is soap opera-esque. The acting is good and there is a strong female character.

HISTORICAL ACCURACY: The movie makes it clear from the opening credits that it is not a true story. This was wise because Szabo strays far from the real story. In reality, Redl was one of the most infamous traitors in history. He was much worse than Benedict Arnold and was responsible for the deaths of thousands of fellow Austrians in WWI.

Some parts of the film are accurate. Redl did come from a poor family and at first he did not fit in due to his lower class upbringing and ethnicity. He did well in school and his academic achievements got him noticed. Excellent fitness reports and subsequent military decorations put him on the fast track. As in the movie, he was promoted to head of Military Intelligence. The movie hints at the reforms he made in the agency. In some ways he was the J.Edgar Hoover of the Austrian Army. He instituted modern methods that allowed him to ferret out spies. These methods included hidden cameras, fingerprint dusting, shadowing suspects, and intercepting mail. He was also not beyond setting up officers for arrest.

The movie is accurate in portraying Redl as a homosexual, but in reality he was not as in the closet as is depicted. His favorite partner was a young cavalry officer who he kept in luxury and travelled with (introducing him as his nephew). However, he also had numerous partners and pictures were found of them wearing women’s clothing and in various “activities”. He was certainly not as torn over his sexuality as the movie implies and was not nearly as secretive. There was no Baron Kubinyi or his sister Katalin. Redl was never married.

Redl’s turning coat was apparently a result of blackmail due to his homosexuality. The Russians got him in their pocket and then kept him there by financing a lavish life-style that went way beyond his salary level and yet raised no red flags. In exchange Redl gave the Russians awesome information. He passed on the plans for the invasion of Serbia which Russia then passed on to its ally resulting in failure and thousands of casualties. He also gave Russia various Austrian plans and information. He ratted out Austrian agents in Russia. He presented the Austrian Army with false estimates of Russian strength. Szabo having Redl blurt out military statistics to a confused faux lover is a ridiculous downplaying of his treason.

The movie implies Redl’s downfall was the result of the dissatisfaction of Archduke Ferdinand. This is totally made up. In fact, Redl was ensnared by his own method of intercepting mail. In a stroke of incredible luck, the new counterintelligence head traced an envelope full of Russian payoffs to Redl. Redl was given a pistol similar to the movie.

In defense of his take on the Redl story, Szabo said he was interested in exploring the identity crisis Redl must have gone through. Coming from a lower class family and a minority, he had to try to fit in in order to rise in the Army. When you throw in his homosexuality, you have an interesting character study.

CRITIQUE: “Colonel Redl” is an interesting movie, but predictable. The themes that power corrupts and ambition is bad have been explored ad infinitum. There is little that is special about the film. The cinematography is simplistic and features a lot of extreme close-ups and static cameras. There is no soundtrack which is either lazy or avant-garde. Generally speaking, there are reasons why virtually every movie has music to set the mood. “Colonel Redl” is not unorthodox enough to justify the absence of music.

The strength of the movie is the acting. Brandauer is excellent as Redl. His portrayal of a tormented man is mesmerizing. His performance is the main reason to watch the movie He is ably served by the supporting cast.  Armin Mueller-Stahl as Franz Ferdinand is convincingly malevolent.

The plot is realistic. Redl’s evolution from innocent, but ambitious trainee to toady of the emperor is believable. The homosexuality angle also seems to fit the man and the times. The depiction of the inner workings of the Austrian Army pre-WWI are well done. The role of politics in a military-dominated monarchy is apparent, especially in the guise of the Archduke.

CONCLUSION: I can only wonder what an accurate movie about the arch-traitor Alfred Redl would be like. I cannot help but believe it would be more powerful and entertaining than this movie. Why do movie makers tinker with accuracy when the real story is better than fiction? Why make the loathsome Redl into a sympathetic character? If you want to make a character study with the themes in this movie, why not make up a fictional character?

“Colonel Redl” is overrated at #50. It is interesting, but not special. I am glad I watched it because it forced me to research the fascinating Alfred Redl. I am ashamed to admit I had never heard of him.  His real story would make a fascinating movie.