CRACKER? Taegukgi (The Brotherhood of War) 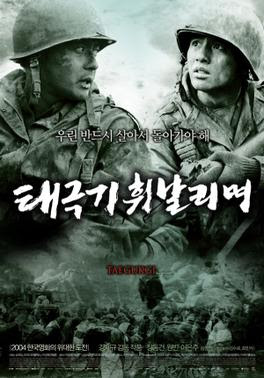 “Taegukgi” is the most famous war movie to come out of South Korea. It was released in 2004 and was South Korea’s answer to “Saving Private Ryan”. It was written and directed by Kang Je-gyu and set attendance records in South Korea. The name comes from the name of the pre-war flag of Korea. It is an epic.


The film opens at an excavation of a battle site (similar to the grave site opening in “Saving Private Ryan”) which leads to the contacting of an old Korean who is linked to one of the corpses. This leads to a flashback to Seoul in 1950 right before the war. Jin-Seok (Jang Gong-gun) and Jin-Tae (Won Bin) are brothers. Tae (that’s what I’ll call him) dreams of being a shoemaker and Seok hopes to go to college. Their happy family life comes to a screeching halt when Seok is press ganged and Tae enters the army to protect him.

They join a unit in the trenches near the Naktong River in the Pusan Perimeter. On a mine-laying operation in no man’s land, the squad is ambushed and Tae goes Rambo (even pulling a grenade pin with his teeth). He is a natural born great shot. The violence is SPResque and the wounds are very graphic. A later attack at night ups the adrenalin with Molotov cocktails and hand-to-hand combat. Tae takes out a machine gun and then the command bunker. Tae has made a deal with his commanding officer that if he wins the Taeguk Cordon of the Order of Military Merit (the South Korean equivalent of the Medal of Honor), his brother will be discharged. The problem is that Tae becomes addicted to combat and the subsequent glory that comes with it. Meanwhile, Seok’s attitude is heading in the opposite direction as his experiences have disgusted him and he is becoming estranged from his brother.

In October, 1950, the fighting shifts to Pyongyang for some urban combat. Tae captures an enemy captain and Seok accuses him of being a glory-hound. At a nearby village, the squad encounters countless bodies, some of which are booby-trapped. It’s retaliation time at the next town as they kill prisoners with only Seok refraining. Seok has to intervene to save the life of a friend of their’s who was forced into the North Korean army. Later, in a strange character development, Seok beats the tar out of a prisoner in a gladiator style pit.

When Seok returns home he has a brief reunion with his fiancé Yong-shin before she is carted off by anti-communist zealots. They bring Seok, too. Yong-shin gets a great death scene as she is killed during a mutiny by the political prisoners. Seok is held captive and then dies when the “Communist” prisoners are burned alive in their jail. An enraged Tae kills the officer who gave the order and then defects to the enemy not knowing that Seok has survived.

Tae is now a North Korea Rambo and heads an elite squad called the Flag Unit. Seok returns to the front to try to reconvert his brother. There is a huge set piece battle involving 15,000 bullets, 3,000 extras, and 500 stuntmen. There are numerous minor injuries in the 3 weeks of shooting, mostly from the fist-fighting. Director Kang Je-gyu throws in the kitchen sink in one of the most remarkable battle scenes ever filmed. There is a strafing attack by CGI Corsairs. A plane is hit and crashes into a machine gun nest. The fighting is hand-to-hand as Seok runs through the trenches seeking his brother. The Flag Unit enters the battle to boost the carnage to a peak. The brothers meet, but Tae does not recognize the ghost of his brother and is in a zone anyway. He is about to kill Seok when he is stabbed. Tae finally recognizes Seok and agrees to return with him but urges Seok to go on ahead while he holds off the North Korean army with a machine gun. His bones are found many years later.

This is an amazing movie. I did not expect much from a South Korean film. I have to assume South Korea is a macho society because the film has more blood and guts than a vast majority of war movies. The violence is a bit over the top, but you have to admire the sheer quantity of the killing. It is “Saving Private Ryan” on meth. It is very gory. If shown in splatter-vision, you would have to burn your clothes.

The movie has its flaws. The two leads are excellent, but the character arc of Seok is not believable. He goes from being frail to buff too quickly. His whipsawing from pacifist to pugilist is also hard to swallow. The family scenes are touching and the relationship between Seok and his fiancé is well done. Her death is heart-tugging. The rest of the roles are not fleshed out enough. We do not get to know the squad very well, unlike other small unit movies like “Platoon”. It does have a few clichés. One soldier shows off a picture of his family.  Can you guess what happens to him soon after? I wonder if this cliché seemed fresh to the South Korean audience. The score is sappy, but at least you can hear it above the explosions.  This is one loud, badass movie.

Will it crack the 100 Best? Certainly. It could definitely kick the crap out of movies like “Guadalcanal Diary”.