SHOULD I READ IT? The Cranes Are Flying 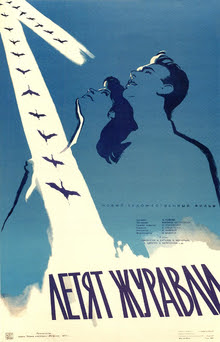 “The Cranes Are Flying” is a Soviet film directed by the acclaimed Mikhail Kalatozov and released in 1957.  It won the Palme D’Or at Cannes in 1958 and is still the only Russian movie to win that prestigious award.  It is set on the home front during the Great Patriotic War (World War II on the Eastern Front).


The movie opens with the heroine Veronika (Tatiana Samoilova) and her fiancé Boris watching a flight of cranes before traipsing through the streets of their Soviet city.  Their wedding has to be postponed because Boris does his patriotic duty and volunteers when the Germans invade.  In a remarkable tour de force by cinematographer Sergei Urusevsky, we follow Veronika through the crowd as she tries to say goodbye to Boris at the train station.  The military band, the tears of loved ones, and the excitement that comes with war are all apparent.  Veronika does not make contact with Boris which is an inkling that this will be a post-Stalin movie that will allow its audience to mourn their losses along with Veronika.


Veronika’s family is stock Russians including the typical grandmother.  During an air raid, Veronika takes refuge in the subway, but her parents refuse to abandon their apartment and you can guess the rest.  What can’t be anticipated is the shot of Veronika running up the stairs and opening the door to find only the grandfather clock left.  Awesome.


Veronika moves in with Boris’ family.  His cousin Mark is in love with her.  During an air raid (didn’t she learn her lesson?), they are alone in the apartment and he apparently rapes her in spite of numerous nyets and slaps.  I assume this because the scene fades with him carrying her off and next thing you know, they’re married.  No one is happy about this (except Mark) as Boris’ family feels she has abandoned Boris.  Meanwhile, Boris gets killed rescuing a friend.  He gets a great death scene where he fast-forwards to their joyous wedding.  No word arrives about his death.


The family relocates and Veronika is working in a military hospital with Boris’ father who is a doctor.  As though she is not depressed enough being married to a rapist and cheater, the doctor makes an impassioned speech against Russian women who do not remain loyal to their soldier boyfriends.  I'm looking at you, Veronika.  She runs away in a wild scene and plans to commit suicide, but instead ends up saving a little boy from being run over by a truck.  His name is Boris!  Go figure.  She brings him home.  Mark gets kicked out when the doctor discovers he lied about his exemption and in fact bribed his way out of being drafted.  Good riddance.


Veronika does not get closure until the war ends.  In a mirror of the leaving scene, Veronika works her way through a crowd to Boris’ friend Stepan.  Stepan gives her the bad news and makes a speech to the audience telling them to remember the dead and move on with their lives.  Veronika gives her bouquet to other soldiers.  Cranes fly over.  Get it?


This movie was a pleasant surprise.  I am not a big fan of Soviet war movies because they can be pretentious.  Kalatosov keeps the avante-garde elements to a minimum.  The movie is not overly propagandistic or preachy, but it definitely has a patriotic message to convey.  Ladies, stand by your soldier man.  People, it’s okay to mourn your dead and move on.  The movie goes beyond these trite themes into uncharted territory for a Soviet film.  Not coincidentally, with the death of Stalin, the film boldly does not focus on the greatness of the regime.  It bravely covers draft dodging, war profiteering, and the black market for the first time in a Soviet film.


This is a director’s movie.  It’s one of those films where you are aware of the craft that went into it.  This is mainly apparent from the astounding cinematography.  There are several scenes that should be film school staples – the bombed apartment, the death of Boris, Veronica’s attempted suicide, the departure and return of the soldiers.  There is one shot where Urusevsky uses a hand-held camera to track Veronika from a bus into a crowd and then suddenly he is on a crane ascending above the crowd!


The acting is better than most Soviet movies.  The cast is solid, but Samojlova dominates.  It made her a celebrity.  She is not hard on the eyes.  Unfortunately, the Soviet government pressured her to turn down offers to go West.  The characters are pretty stereotypical – the stern father, the loving boyfriend, the cad – but they are not caricatures.  The plot is the standard war-parts-the-lovers-and-their-lives-change-for-the-worse plot.  As such, it is better than most, including American and British equivalents.


“The Cranes Are Flying” is a must see for all war movie lovers and cinephiles, but it will not make my 100 Best.  However, I’m glad I watched it.  It impressed me more than similar Soviet films like "Ballad of a Soldier"


grade =  B+
POSTER:  Terrible!  Is that because it's Soviet and their poster technology was inferior to that of the West?  It provides absolutely no inkling what the movie is about.
the trailer
the stairs scene
﻿
TRAILER:  Great.  Even if you can't understand the Russian, you can understand the mastery of the cinematography.  A
Posted by War Movie Buff at 7:20 PM