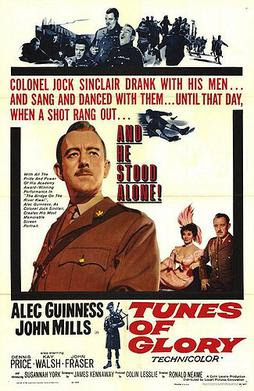 “Tunes of Glory” is a British service film released in 1960.  It was directed by Ronald Neame from a novel by James Kennaway.  Kennaway adapted his novel for the screenplay and adjusted it significantly to make the movie plot better than the novel.  His script was nominated for an Academy Award.  He served in the Gordan Highlanders.  The title comes from the bagpiping at regimental ceremonies.


The movie opens with bagpipers entertaining officers at a dinner in a Scottish Highlander regimental barracks in the post-WWII period.  Maj. Jock Sinclair (Alec Guinness) presides like a frat president.  He chastises a young officer for not smoking his cigarette like a man.  Sinclair announces he is being superseded by a new commander.  These seems unfair considering that he led the regiment through the war after their commander was killed.  Sinclair had risen through the ranks after starting as a piper.


The new commander is a Lt. Col. Barrow (John Mills).  Barrow is the polar opposite of Sinclair.  He is upper class and graduated from Oxford.  He spent the last part of the war in a Japanese prison camp.  He is now in command because his family is associated with the regiment.  While Sinclair is a drunken, arrogant bonhomme who is loved by his men.  Barrow is an officious martinet.  Both men have been effected by their war experience.  Sinclair is still addicted to the camaraderie and only results matter mentality.  Barrow is obviously suffering from the mental consequences of his Japanese imprisonment.  It is implied that he was tortured.


Barrow cracks the whip on the frat house antics and insists the officers learn highland dancing in anticipation of a party for the locals.  (Imagine forcing a frat house to learn square dancing.)  In a telling exchange, Barrow demands the bagpipers follow a dress code and Sinclair insists it’s the music that matters.  Sinclair is constantly undermining Barrow’s authority and is quick with snide comments.  He is quite the ass.


The party is a disaster as Sinclair and his posse get drunk and dance inappropriately.  Barrow has a melt down.  Soon after, Sinclair catches his daughter (Susannah York) in an affair with a lowly piper and punches him.  Sinclair’s best friend Scott (Dennis Price) wants Sinclair’s girl so he secretly urges Barrow to throw the book at Sinclair.  At this point the regimental officers begin to represent a cheerleader squad with all the backbiting and factions.  Barrow knows he’s in a no win situation, but naturally leans toward following the rule book no matter the effect on morale.


In a powerful scene, Barrow comes to apologize for charging Sinclair, but argues he has no choice.  Sinclair plays contrite and argues the affair should be swept under the rug for the good of the regiment.  He promises to toe the line from now on.  Barrow reluctantly agrees to the deal.  Happy ending with mutual respect developing, right?  Wrong!  Sinclair and his frat buddies become insufferable and Scott needles Barrow for wimping out even though he can see he is fragile mentally.  Both leads are on downward paths because they cannot change their personalities.


“Tunes of Glory” is worth seeing mainly for the great acting.  Guinness and Mills are fantastic and the rest of the cast hangs with them.  The two leads do not chew the scenery although it must have been tempting to.  Susannah York is nice eye candy in her first role.  The acting must have been the main reason the movie was so positively received by critics.  Looking at the picture as a whole, the acting overshadows some flaws.  The plot is too simplistic.  The two leaders are too extreme as archetypes.  This actually works pretty well because unlike most movies of this type (e.g., “Damn the Defiant”, “Platoon”), neither character is sympathetically portrayed and you can’t root for either.  The twist of Sinclair being unredeemable is certainly uncliche.  The biggest flaw is Scott’s behavior.  His betrayal of his best friend over a woman is unrealistic.  It is also unrealistic and lazy to have both leaders suffer nervous breakdowns.  It’s as though Kennaway wanted to keep it a tie to the very end.


“Tunes of Glory” deserves to be seen, but is overrated.  It is instructive on the role of class distinctions in the British Army.  No army is history has had such a strong dynamic.  It’s amazing that it was still strong even after WWII.  The movie also is strong in depicting the varied effects of wartime experiences on peacetime officers.  It is one of the best character studies set in a peacetime army setting.
Grade =  B-
Posted by War Movie Buff at 9:53 PM