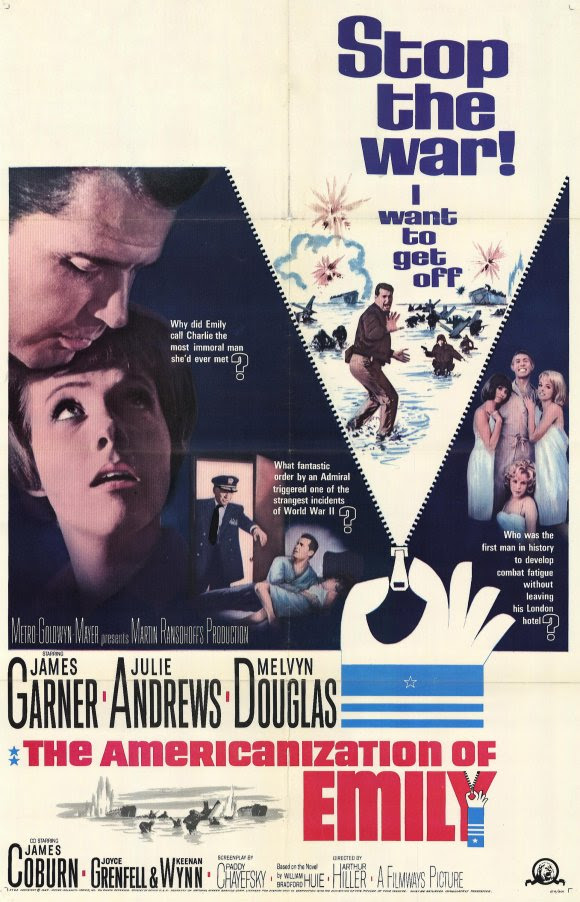 “The Americanization of Emily” was a black comedy released in 1964.  It was loosely based on the novel by William Bradford Huie.  Huie was a Seabee who participated in D-Day and based the plot on his experiences.  Paddy Chayefsky wrote the screenplay and made it more of a comedy.  The whole cowardice theme does not appear in the book.  The film was directed by Arthur Hiller (“Tobruk”).  It was a commercial and critical success.  It was nominated for Academy Awards for Art Direction, Cinematography, and Music Score.  Both Julie Andrews and James Garner claim it is their favorite film.  The “Americanization” of the title refers to British women giving sexual favors in exchange for American stuff like Hershey bars.  The movie is set in London in 1944.
The first time we meet Charlie Madison (Garner) he is patting the rear of motor pool driver Emily Barham (Andrews).  She is offended, but this is a Hollywood movie so you can see where this relationship is heading in the end.  The only suspense is how  we get there.  Madison is personal aide to Rear Admiral Jessup (Melvyn Douglas) and an ace “dog robber”.  A dog robber was a scrounger who could provide their superior with the finer things in life, including females.
In spite of the rocky start, when Emily shows up at a party looking ravishing,  they are in bed soon enough with music swelling.  It turns out that although the prim Emily does not want to be Americanized (she does not like Hershey bars), she is attracted to the fact that Madison is a “practicing coward”.  Having lost a husband, father, and brother in the war, it’s time to try a hunk who is determined to live out the war.  Very determined.  When Madison meets Emily’s mother (who refuses to admit her husband is dead), he proceeds to give her a sermon on the joys of cowardice.  Chayefsky riffs on the glorification of war.  ”It’s always the generals with the bloodiest records who are the first to shout what a hell it is.  It’s the war widows [like you, Mrs. Barham] who lead the Memorial Day parade.”  He leaves his future mum-in-law in tears, but she needed to hear it.  Right?﻿
The mentally unstable Adm. Jessup has a brainstorm.  Since the Army will be getting all the glory from D-Day, the Navy needs a leg up if its going to survive the post-war demobilization.  Wouldn’t it be great if the first serviceman to die on Omaha Beach is a sailor?  And how about if it was filmed for a documentary?  Madison’s buddy “Bus” Cummings (James Coburn) is enthusiastic about the idea and orders Charlie to go ashore with the combat engineers as the head of a film crew to get the money shot.  Charlie is less than thrilled with the dangerous assignment, but is confident that he can weasel out of it.
When Charlie is giggly about his efforts to avoid heroism, Emily suddenly decides she can’t be with a man with no principles.  It’s not like he’s been hiding his feelings.  He virtually yells them from the Tower of London.  When she jilts him he lays into her so badly you begin to wonder if Chayefsky is going to go off the reservation and not give us our normal reconciliation as part of a happy ending.  (Clue:  this movie was made in 1964, not 1974.)


Charlie arranges to be late for the mission which is scheduled for June 5.  He is gleeful until the weather postpones the invasion to June 6 and now he’s in for it.  Damned fickle Mother Nature!  Damn Eisenhower and his flexible timetable!  Charlie and his camera crew (two drunken misfits) are landed ahead of the invasion.  Since Bus knows his friend is a coward, he follows him with the real camera crew and makes sure Charlie is the first American killed in D-Day.  Hilarious!  That is one deserted beach.  Charlie is now the hero he fought so hard to not be.  Ironic right?   [See spoiler conclusion below]
RACHELLE’S TAKE:   My wife could not tell whether the movie was supposed to be a drama or a comedy.  The movie is best viewed if you know going in that it is a black comedy.  She liked the acting, but was put off by the changing moods of the main characters.  Emily, Charlie, and Bus whiplash from one extreme to the other at various times in the film.  She also found the dialogue was not realistic for real people.  Of course, this is not unexpected for a Chayefsky screenplay.
KEVIN’S REVIEW:  This is a strange movie.  It’s not clearly a comedy or at least it’s not that funny.  The theme that war should not be glorified and those who avoid dying in war have some justification for their cowardice is interesting, but Charlie’s monologues bludgeon us with it.  Charlie is also a repugnant character, although we are supposed to empathize with him and view him as a loveable rogue.  The fact that Emily falls in love with him is not believeable.  Her character arc is not satirical.  It is straight forward that she goes from abhorring this living-large-while-other’s-sacrifice brash Yank to bedding this principled coward to jilting this unprincipled coward to being devastated by his heroic death.  Julie Andrews must have loved being able to play a schizophrenic.


The movie should have ended with Charlie’s “death”.  What comes after dilutes the satirical nature of the script and turns it into a farce.  But then we  wouldn’t have a happy ending.  Chayefsky pulls his punches and should be ashamed for it.  There is a difference between a farce and a satire.  Decide which you want it to be and stick with it.
CLOSING:  When Emily learns of Charlie’s death, she is despondent but proud of her coward turned hero.  The admiral comes to his senses and is upset it was his loony idea that resulted in Charlie’s death.  However, he plans to use the publicity to make sure there is a Navy forever.  He envisions Charlie receiving a posthumous Navy Cross from the President.  Things get complicated when Charlie turns up alive.  How inconvenient!  Emily is thrilled her coward is back.  We get a run and kiss reunion.  Charlie insists on telling the truth about his “death”.  Suddenly he is brave when it comes to his cowardice and will blow the lid off this scandal.  Emily convinces him to embrace his cowardice and be the hero who was the first American to land on Omaha Beach.  He agrees and they live happily ever after.
grades: