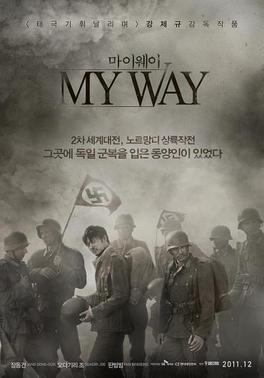 “My Way” is South Korean war movie that is not set in the Korean War!  That’s right, it’s a Korean war movie that is not a Korean War movie.  It was directed by Kang Je-gyun in his kick-ass style.  It was his first film in seven years.  I assume it took him seven years to recover from making “Taegukgi”.   He got a huge budget of $24 million, but the film flopped at the box office.  The movie is based on a true story.  You’ll question that by the end of the movie.

“An Asian man wearing a German uniform was discovered by the U.S. military at Normandy on the D-Day, 1945 [sic].  Upon questioning, he was identified as Korean.”  From acorns grow mighty oaks.   The narrative starts in 1928 Seoul.  A Japanese family arrives.  The father is a diplomat and his son Tatsuo becomes running buddies with the son of a staff member named Jun-shik.   A running montage takes them through high school.  At a party celebrating Tatsuo’s winning of a marathon, a terrorist bomb gets Jun-shik’s father unjustly arrested and tortured.  End of buddies and beginning of bitter rivals.  Jun-shik (Jang Dong-gun) becomes a rick-shaw driver (convenient for a long distance runner) and Tatsuo (Joe Odagiri) goes off to college.  They meet again at the Olympic try-outs.  A riot resulting from the tainted result ends with Jun-shik and his best pal Lee Jong-dae (Kim In-kwon) getting conscripted into the Kwantung Army.  Conscription will become a recurring theme.

Jun-shik and Jong-dae end up on the Mongolian border facing the Soviets.  We know we are watching a Korean war movie because Cossacks ride in with swords slashing, a guy gets run over by a tank, tanks set oil rigs on fire, etc.  The Soviets have a Korean female sniper who shoots only Japanese soldiers to avenge her and her mother’s rape and the murder of his father.  Don’t ask how she can tell the Japanese and Koreans apart, that would be racist.  Guess who arrives to take command of Jun-shik’s unit?  You thought he was a dick before, now he is a dick in command ( a D in C).  When Tatsuo orders Jun-shik to lead a suicide attack against Soviet tanks, Jun-shik refuses and is thrown in the pit with the sniper, of course.  They escape, but Jun-shik returns to warn about an incoming Soviet attack.  When a Soviet fighter strafes them, the sniper shoots it down with one shot!  Ridiculous, but super cool.  And very romantic!  The ensuing battle is incredible.  The Japanese run trucks into the tanks and then follow with a banzai attack of human bombs and Molotov cocktails.  The Soviets respond with flame-throwers, naturally.
Jun-shik, Jong-dae, and Tatsuo end up in a Soviet prisoner of war camp.  Jong-dae is like a kapo in a concentration camp.  He is cooperating with the Soviets and likes it.  Jun-shik and Tatsuo are given the chance to settle their differences in a knife fight.  Korean war movie knife fights can give their combat scenes a run for their money.  Hatred turns to grudging respect.  They are about to be executed when word arrives that Germany has invaded the Soviet Union and they are conscripting all the prisoners.  Lucky for Jun-shik and Tatsuo, sort of. Remember that suicide attack scene from “Enemy at the Gates”?  You will when you watch Jun-shik, Jong-dae, and Tatsuo fight the Germans.  Jun-shik and Tatsuo survive and begin a mountain-crossing trek to Germany that ends with them in Normandy on June 6, 1944.

“My Way” may have been a box office bomb, but for war movie fans it is da bomb.  Sorry. Just be aware that the plot is more implausible than a Trump victory.  Turn off your brain when you view it.  Please don’t watch it to learn what happened at D-Day.  Although I would not be surprised if it conforms to what is taught in South Korean class rooms.  Just pop the corn and watch it for the incredible combat.  The violence is cartoonishly graphic which makes it typical of the South Korean war movie subgenre.  If you have seen any of their movies, you know they like to kick it up to 11 on a scale of one to ten.  “My Way” will have you smiling in spite of the carnage.

Director Kang has made a movie that is fun to watch.  He uses a wide variety of cinematography including POV.  The average shot length is very short.  You won’t get bored.  The score is epically pompous, but constrained.  The acting is surprisingly good, especially by Jang.  He has a lot of charisma.  This performance, in addition to his star turn in “Taegukgi”, makes him the John Wayne of Korean war movies. Kang manages to include a strong female warrior – to attract the ladies.  Hey dear, do you want to watch a Korean movie?  It has an appealing female character, no cursing, and no nudity.  Why is it rated R?  Honey, how am I supposed to know the Korean rating system?

Although the plot is outrageous, there are some interesting character developments and some unexpected deaths.  While a bit clicheish, with its themes of redemption for Tatsuo and perseverance for Jun-shik, the character arcs are competently handled and no one expects the movie to be ground-breaking in its structure.  Kang does “borrow” from some other war movies, like “Saving Private Ryan” for its beach landing scene and “Enemy at the Gates” as mentioned.  For you Old  Schoolers, the Jung-shik and Tatsuo dynamic has a touch of the Quirt / Flagg relationship.  You watch Korean war movies for the action, not the exposition.  Speaking of which, the dialogue is unmemorable.  That’s a good thing.  You sure don’t have to worry about bad jokes.  The Koreans are not exactly known for adding humor to their war movies.

“My Way” is not the best Korean war movie.  That is still “Taegukgi”, but it is certainly in the top five.  Kang showed he still had it and if you don’t mind excess, the movie is highly entertaining.  For guys, anyhow.  It is not a date movie.  The violence is over the top and the plot is hard to swallow.  For those who automatically assume the story is total b.s. (like me),  there is an iota of truth to it.  There was a Korean named Jang Kyoungjong who was conscripted into the Japanese army in Manchuria at age 18 in 1938.  He was captured fighting the Red Army at the Battle of Khalkhin Gol and sent to a labor camp.  In 1942, he and other Korean and Japanese prisoners were pressed into service against the Germans.  In 1943, he was captured at the Third Battle of Kharkov.  He was put in an all-oriental unit called the “Eastern Battalion” and was stationed near Utah Beach on D-Day.  On that day, he was captured by American paratroopers.  He ended up in a prison camp in America and stayed in the U.S. after repatriation.  He died in 1992.  It won’t surprise you to find out this story is disputed.