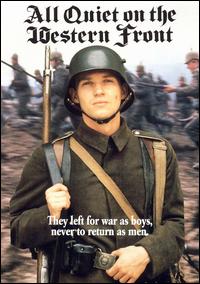 Why not start the new year with a bang and disillusion my readers at the same time?  For this year’s annual post on the best movie I reviewed in the past year, I have chosen a movie that will surprise many.  The best war movie I reviewed this past year was the extended version of “All Quiet on the Western Front” (1979).  Before you book me for the insane asylum, be aware that the movie won the Golden Globe for Made for TV Movie.  It also was nominated for six Emmys including Outstanding Drama or Comedy Special.  It was directed by Delbert Mann.  He filmed the movie in Czechoslovakia, which was a rare locale considering this was before the Iron Curtain came down.

SPOILER ALERT:  Because most of my readers will have already seen the original and/or read the book, I am going to summarize the movie and comment on the scenes.  Skip to the review if you are not familiar with the story.

The movie opens with the opening statement from the novel:  “This story is to be neither an accusation nor a confession…”  We get a crane view of trenches.  They are zig-zagged, with barbed wire and sand bags.  A Czech field has been molded into an excellent no man’s land replete with the remnants of trees.  Paul (Richard Thomas) narrates and introduces his squad.  Some are Paul’s classmates, who are new to the war and see it as a bump on the road to their futures.  The other characters in the group are veterans like Kat (Ernest Borgnine) who have been scarred by the war.  It is obvious the movie will whittle down this band and it starts with an ambitious battle scene.  The Germans work their bolts as the French approach their position.  The sounds include the tinkling of the barbed wire.  The iconic shot of the severed hands on the barbed wire is recreated so you know there will be homage to the original.  The counterattack is followed by crane and tracking shots.  It’s made for TV scale.  The deaths are of the touchdown signaling type, but otherwise the scene is a harbinger of the film’s attempt to do justice to the source.  The war’s futility is embodied in this opening.

The movie has a nonlinear format as it flashes back to Paul’s classroom where his teacher Kantorek (Donald Pleasence) exhorts his class to be “iron youth” and do their duty to the Fatherland.  In a bit of foreshadowing, Paul sketches a bird as Kantorek indoctrinates.  He personally pressures Paul as their leader.  Tapping the theme that war will corrupt, he offers Paul a cigarette, which he declines.  The boys march off to enlist enthusiastically.  As boys were wont to do in 1914.
Paul and his mates visit Kimmerich in the hospital.  It is in a church and is crowded and busy, but too quiet.  Hollywood seldom gets the noises of war right.  Kimmerich (who was introduced as wanting to be a forester) was wounded in the leg in the opening battle and has had his leg amputated.  His death is the first and ends their innocence.  His boots are passed on.  The movie recalls Paul’s promise to Mrs. Kimmerich to keep her son alive.

At the training camp, Paul and the others are introduced to Himmelstoss (Ian Holm) who is a cinematic drill instructor.  The recruits take umbrage to his methods (which actually are pretty standard).  A montage proves this.  Himmelstoss is a dick, but what DI isn’t?  He takes a personal dislike for Paul and punishes him for showing him up.  The core group wreaks revenge on their trainer and go off to war sated and ready to make the Fatherland proud.  As they march off as soldiers, a new cadre of cannon fodder arrives. Heavy-handed, but effective. In a reversal of the imagery, Paul and the others reach the front and confront wounded soldiers at the depot.  Sober up, boys!  They meet Kat who immediately tells them to forget everything they learned at boot camp.  Kat will become Paul’s mentor and friend.  He takes the men on their first night patrol.  They witness horses caught in a bombardment.  Man’s inhumanity is not limited to man.  At this point, the movie shifts to a series of vignettes from the book.

Poison gas takes a replacement.  As veterans, Paul and the others are frustrated with the youngsters.  Himmelstoss arrives at the front in charge of some replacements.  His hardened trainees disrespect him.  Rank does not trump battle experience at the front.  In a dugout during a prolonged bombardment, rookies panic, but the vets take it in stride.  Other dugout scenes give a taste of life in the trenches.  Men sharpen entrenching tools to be used as weapons.  Some pick lice.  There is a game involving pay-back on the rats that plague them.  The movie has some nice touches of soldier humor.

In a night action, Paul is trapped in a shell crater with a French soldier that he has wounded.  Paul delivers a soliloquy on war’s effects on the brotherhood of man.  It is a powerful indictment of war and very faithful to the novel.  The Kaiser visits and gives a speech that hearkens back to Kantorek’s classroom exhortation.  In a commendable bow to history, the actor portraying the Kaiser uses only his right hand to pin a medal on Himmelstoss.  (Kaiser Wilhelm II had a withered left arm.)

Paul and two of his buddies have their first sexual experience with some French girls in a chaste scene that reminds you that they may be soldiers, but they are still seeking normal maturation experiences.  Paul and Albert (David Bradley) are wounded in a bombardment and sent to a Catholic hospital.  The sisters have the thankless task of lying to the men to maintain morale.  War corrupts even the saintly.  Paul recovers and gets leave back home.  His mother (Patricia Neal) is dying of cancer, but is only concerned with his welfare. His home town is a world away from the war.  The citizenry is seemingly unaffected by it.  Paul’s father represents the clueless older generation that debates strategy over their ales.  A visit to Mrs. Kimmerich results in Paul swearing on his own grave that her son died without pain.  After all he has been through, Paul has kept his humanity.  A stop at his old classroom finds Kantorek still propagandizing.  Paul reveals that the impressionable young man has become a cynic when it comes to serving the Fatherland.  Before he returns to the front, Paul tries to write his mother a letter telling her what it is really like.  He has changed and now is more comfortable with his buddies in the trenches.  Death is now his life.  The home front section excellently contrasts the home front with its naivete to the war front with its brutality.
When Paul returns to his real home, he finds that Kimmerich’s boots have now been passed on to Tjaden.  The squad has been reduced to a few survivors.  But the movie is not done with them yet.  Eventually it is just Paul and Kat.  Kat is wounded by shrapnel from a random artillery shell.  Paul carries him a long distance to an aid station only to find that Kat has passed away from more random shrapnel.  The poignant scene is handled subtly.  The movie closes with Paul having assumed Kat’s role. He is now smoking cigarettes. In a nifty reference to the classroom scene, Paul is sketching a bird when the end comes.

How do you compete against the most revered war movie of all time?  That is the problem the 1979 version has had ever since it came out.  This is unfair because this version was simply an attempt to bring the classic war novel to a new generation.  A generation that was not keen on watching an old black and white movie.  It also was an attempt to bring the story to television.  When you consider the goals and don’t hold it to impossible standards, it is actually a very worthy interpretation of the book.  All of the scenes in the movie are straight from the novel and faithful to it.  Much of the dialogue is straight from the book.  No characters are added and the ones that appear are well developed.  The members of the squad are individuals and are fleshed out.  Obviously, Paul dominates, but it is a true ensemble effort.  Paul’s arc from naïve recruit to cynical veteran is powerful and reflects one of the novels main themes.  Note that Paul declines to smoke cigarettes throughout the movie, but in the final scene he has taken up the habit.  Richard Thomas is outstanding and deserves more credit for his acting than he got.  Many forget that he played two of the most iconic characters in war novel history since he also starred in the remake of “The Red Badge of Courage” (1974).  (This movie is one of my great white whales as it is exceedingly hard to find.)  The cast is uniformly strong with Ernest Borgnine outstanding as Kat and Ian Holm bringing gravitas to Himmelstoss.  Borgnine was nominated for a Best Supporting Actor Emmy, as was Patricia Neal as Paul’s mother.  You can justify all you want the silent movie histrionics of the original film, but this version has no cringeworthy performances.
Because of the nature of it being a made for TV movie, the combat scenes are not epic.  However, people forget that the novel does not emphasize battles.  Probably the most important scene in the book is Paul’s encounter with Pierre Duval in the shell crater.  This movie handles that scene perfectly.  Watch it and tell me Thomas is not Paul Baumer brought to life.   No one can seriously claim that the scene in the original is better.  The effects are fine with the explosions and the sound effects showing a fidelity to war on the Western Front.  A lot of effort went into the exteriors and interiors.  The dugouts are claustrophobic and no man’s land is cratered.    The bombed-out villages contrast to the untouched home front locations.  Allyn Ferguson’s score is used sparingly and does not try to steer the audience’s emotions.
It is hard to imagine that the new “All Quiet…” (starring Daniel Radcliffe) will be superior to this version.  It is due in 2018 so we have some time to get used to the idea.  Harry Potter’s casting is similar to the casting of John Boy Walton, so it could work out in spite of doubts.  However,  I am not hopeful for the script due to the fact that the writer-producers have proclaimed that it will be a Hollywood epic and they are adding new story-lines.  One of the strengths of the 1979 version is its faithfulness to the original and to the book.  Although I strongly recommend reading the book (as I have several times), the 1979 version is a great alternative for you non-readers.  Give it a chance.  Keep an open mind.  It is possible for a remake to be decent, albeit rare.  “The Thing” comes to mind.  Ironically, that remake has about the same death toll as “All  Quiet…”