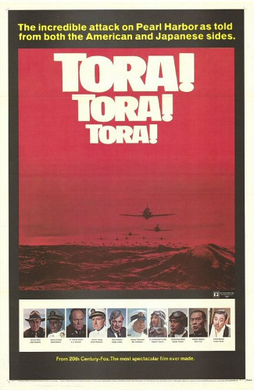 SYNOPSIS:  “Tora! Tora! Tora!” is the story of the attack on Pearl Harbor told from both points of view.  It is mainly the command perspective, but it does culminate in an exciting reenactment of the attack with real aircraft.  The movie covers the months leading up to the attack, so you get both the military and political machinations.  It has a docudrama feel to it with an ensemble cast that portrays mostly historical characters.  Spoiler alert:  the Japanese win.

BACK-STORY:    It had three directors:  Robert Fleischer (“The Vikings”), Toshia Masuda, and Kinji Fukasaku (“Under the Flag of the Rising Sun”).  It was based on books by Ladislas Farago and Gordon Prange (At Dawn We Slept).  Five B-17s, two P-40 Warhawks and a PBY Catalina were available for the production.  The Japanese Zeros, Kates, and Vals were played by modified A-6 Texans and BT-13 Valiants.  Full scale mock-ups of the battleship Nagato and the aircraft carrier Akagi were built on the shore with ninety feet extending over the water.   The movie won the Oscar for Best Special Effects and was nominated for Art Direction, Cinematography, Film Editing, and Sound.  The movie was a flop at the box office in America, but a big hit in Japan.

TRIVIA:  Wikipedia, imdb, TCM
1.  The Japanese word “tora” means either “surprise achieved”, “attack”, or “tiger”.
Darryl F. Zanuck wanted to recreate the success of his “The Longest Day”.  He also wanted to offer a revisionist view of the attack.  Specifically, he was interested in refuting the belief that Admiral Kimmel and Gen. Short were to blame for the debacle.
3.  The movie was a joint Japanese-American production.  Akiro Kurosawa was the original Japanese director, but his style did not fit an American blockbuster and he chaffed at the suits looking over his shoulder.  The suits chaffed at his slow and costly production methods.  Some think he was so miserable with the situation that he purposely aggravated the studio into firing him.  After working on the film for two years, he was fired two weeks into filming.  Only about one minute of his work made it into the film.
4.  The casting director was told to eschew big stars so the story would be the focus.
5.  A B-17 was forced to make a crash landing because of a jammed landing gear.  With a heads up on the situation, cameras were set up and it made it onto the screen.
6.  At one point over 30 aircraft were in the air.
7.  The main technical adviser was historian Gordon Prange who wrote “At Dawn We Slept” (entitled “Tora, Tora, Tora” in Japan).  He had a lot of say on the script.
8.  The U.S. Navy allowed a lot of personnel to participate off-duty.  This caused some complaints from some Americans who still held a grudge over the attack.
9.  The film credited 224 actors – 137 Americans + 87 Japanese.

OPINION:  I do not understand the lack of love this movie got from critics.  Yes, it is not splashy entertainment, but it is as accurate as you could expect and it is not a stale documentary.  Along with “The Longest Day”, it is the best battle movie when it comes to giving fair treatment to both sides.  It has some of the best air combat footage and this without CGI.  The fact that it was a box office flop and “Pearl Harbor” wasn’t tells you a lot about what the American public wants when it comes to historical movies.   As you can see above, it is not included in three of the five expert lists.  That is a head-scratcher.  Thankfully, it is fairly treated on this consensus list.