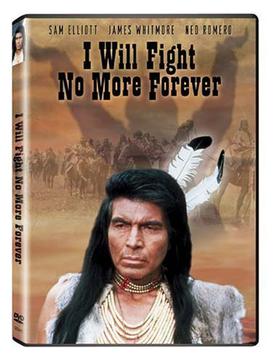 “I Will Fight No More Forever” was part of the new wave of revisionist Westerns of the 1970’s.  Movies like “Little Big Man” (1970) began to take a more balanced view toward the Indian wars.  The movie’s title comes from one of the most famous quotes by a Native American leader.  Chief Joseph of the Nez Perce tribe said it in his speech as he surrendered to the U.S. Army.  The movie chronicles what is known as the Nez Perce War in 1877.  It was made-for-TV and directed by veteran television director Richard Heffron.

The movie opens with the murder of an Indian by a despicable rancher named Grant who falsely accused him of horse theft.  The Indian’s son Wahlitits vows revenge, but the tribal elders led by Joseph (Ned Romero) counsel patience because of the power of the whites.  The younger warriors are belligerent.  A narrator explains that the problem was white greed for land.  The Nez Perce were the last free tribe.  It is clear this movie will take the Indian point of view, but the narrative is balanced between Joseph and Gen. Oliver Howard (James Whitmore).  Whitmore is sympathetic toward the plight of the Nez Perce.  He disagrees with the government policy of forcing the tribe onto a reservation so settlers can take their idyllic Wallowa Valley in Oregon.  But being a professional soldier, he feels he must follow orders.  He meets with Joseph and listens to his friend’s grievances, which mainly consist of white harassment that goes unpunished.  Howard gives Joseph four days to get the tribe moving.   Joseph is the only chief that feels they need to go to the reservation, everyone else wants to die fighting for their land.  The argument becomes moot when Wahlitits touches off a war that the Indians can not back away from.  Joseph leads his people on an arduous trek to try to reach safety in Canada.  They are pursued by Howard and other armies.  The Nez Perce will suffer from the grueling march, but also from a series of battles.

The movie shows clearly its made-for-TV budget.  The Indians look like they are wearing Indian costumes for a party.  The cast is not impressive, but does include Whitmore and a young Sam Elliott plays Howard’s subordinate Capt. Wood.  Wood is there to voice the views of the Indian lobby.  Since Howard is empathetic, the movie is without a villain to balance the saintly Joseph.  Not that the movie needed to be balanced.  The Nez Perce were not perfectly innocent, but they certainly were wronged and their exodus is one of the most remarkable events in the history of the West.  The movie is a good history lesson.  You will learn the basics, albeit in a simplified way.  The movie only alludes to several of the battles the Indians had to fight and the hardships the people went through on the arduous trek are brushed over.  One plus is the movie periodically updates the journey via a map.  The two battles that are reenacted are well-done in a small-scale way.  There were not enough extras to give a true feel for them.  The first is commendable in its variety of Indian weapons, but the second lazily has virtually every combatant, Indian and cavalryman, wielding a repeating rifle.

The acting is decent, with the exception of an amateurish performance by an unknown actor as Wahlitits.  The dialogue stands out and the writers were nominated for an Emmy.  However, Chief Joseph and his command group speak anachronistically well. But that is true for most of the revisionist Westerns.  The Howard/Wood discussions are spirited, if a bit redundant.  Surprisingly, Wood was not an invented character to represent 1970’s views toward the treatment of the Indians.  There were a few officers like him that bemoaned the Indian policy.  All the Indian leaders were actual figures, with Joseph dominating the film as textbooks would condone.  In reality, Joseph was a “good Indian” whose role in the war has been exaggerated.  Not that he did not deserve the movie treatment he got here.

“I Will Fight No More Forever” is a worthy entry into the revisionist Indian Wars movie subgenre.  The Nez Perce War was an obvious choice for movie treatment once Hollywood realized there were other events besides Little Big Horn and other leaders besides Sitting Bull.  Considering the low budget, it does a decent job bringing this tale to the screen.  If you have seen the imagining of Mount Rushmore with Sitting Bull, Geronimo, Red Cloud, and Joseph, you will know why Joseph is in the pantheon by watching this movie.

HISTORICAL ACCURACY:  The Nez Perce had inhabited the Wallowa Valley (and more) for generations.  They had remained peaceful despite white provocations that went unpunished by white authorities.  The movie opens with a typical incident where an Indian is accused of horse theft by a rancher and is killed.  This was based on an actual incident where a friend of Joseph named Wilhautyah was murdered.  The rancher, Alex Findley, was tried (a very rare outcome for white on Indian crime) and acquitted (surprise!).  Two Indian eye-witnesses refused to testify, for obvious reasons.  Findley was not killed in a revenge-killing, like Grant in the movie.  A treaty in 1855 gave up half of their land.  After gold was discovered in the area in 1863, they were forced to give up ¾ of the remainder.  Chief Joseph, the father of the famous son, was one of the nontreaty Indians.  Although forbidden by the treaty, white settlers poured into the Wallowa Valley.  In 1871, Chief Joseph died and Young Joseph took over as chief.  In 1875, Pres. Grant bowed to white pressure and reality.  The Nez Perce were ordered to a reservation.  After several meetings with Howard (he did have an adjutant Major Henry Wood who sided with the Indians), Joseph and the other chiefs agreed that it would be suicidal to defy the Army.  600 Indians headed for the reservation.  Two days from their destination, three Indians went seeking revenge for the death of Wahlitits’ father.  They killed several whites and this set off a series of raids by other young men.  The match had been struck.  Howard sent Capt. David Perry with 130 soldiers plus eleven volunteers (and 13 Nez Perce scouts!) to arrest the perpetrators.  At White Bird Canyon, negotiations were underway when someone on the white side opened fire.  The Indians responded with alacrity and routed the whites, although outnumbered and armed only with bows and a few muzzle-loaders.  They did acquire many rifles from the battle.  The movie was pretty accurate on this battle.  Looking Glass joined after his village was attacked for no good reason.  He was appointed war chief.  At the Clearwater River camp, Howard caught up with them.  Although he had a howitzer and two Gatling guns, his assault was blunted by the elderly warrior Toohoolhoolzote and two dozen warriors.  Other warriors joined and Howard was surrounded.  The Indians pinned down the troopers with sniping while Joseph organized the retreat of the camp.  They crossed the Bitterroot Mountains, bypassed a blocking force, peacefully bought supplies in Stevensville, and then camped in the Big Hole Valley.  Thinking themselves safe, they were surprised by Col. John Gibbon.  His 200 men stormed into the sleeping camp, killing women, children, and the elderly.  It was similar to the Sand Creek Massacre, except that the warriors, led by White Bird, were able to fight back.  The marksmanship the Nez Perce was famous and it took a heavy toll on Gibbons’ men.  Once again, Joseph organized the flight of the noncombatants.  The warriors broke away when Howard arrived with reinforcements.  Howard allowed his Bannock Indian scouts to disinter Indian bodies to be scalped and mutilated.  Contrast the barbarism of Gibbons and Howard to that of the Nez Perce who did nothing to Perry’s bodies.  Because of the surprise, Looking Glass was deposed and replaced by Lean Elk.  They passed through Yellowstone National Park.  The stage coach incident occurred, but it was Lean Elk who intervened to save the whites.  The Crow Indians refused them refuge, so they moved on toward Canada.  The warriors held off a cavalry charge by elements of the 7th Cavalry under Col. Sturgis in a canyon.  They moved on to the Bear Paw Mountains where they camped thirty miles from the border.  It was here that Gen. Miles attacked with 600 men and a large number of Cheyenne warriors.  White Bird blunted the charge and the cavalry went to ground.  A siege ensued.  Toolhoolhoolzote and Ollikut (Joseph’s brother) were killed.  When Howard arrived, the situation was hopeless.  At a council with Looking Glass and White Bird, Joseph argued for fighting to the end.  Soon after, Looking Glass was killed.  Joseph realized the end was nigh and made his famous speech.  White Bird and a few warriors made it to Canada.  Even before the oration, the newspapers had chosen Joseph (because you can’t complicate things with more than one leader) to lionize.  He was referred to as the “Napoleon of the West” because of his brilliant strategy and tactics.  In reality, the victories were not his and the Nez Perce won at places like White Bird Canyon and Big Hole because they were able to seize the initiative when surprised.

Email ThisBlogThis!Share to TwitterShare to FacebookShare to Pinterest
Labels: Chief Joseph, I Will Fight No More Forever, Nez Perce Indians