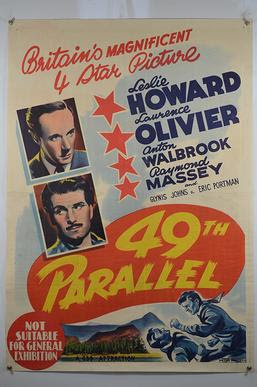 “49th Parallel” is a British propaganda film released in 1941. It is loosely described as a war movie. It was requested by the British Ministry of Information to encourage American entry into the war and to unite Canada behind the war effort. The movie was a big hit in England and America (where it was titled “The Invaders”) and won the Academy Award for Best Original Story. It was nominated for Best Picture and Screenplay.


The movie opens with a map showing the 49th Parallel which is the boundary between the U.S. and Canada. Ironically, no scenes occur on the 49th Parallel. A German u-boat, U-37 (a fictional boat), is sinking ships off the coast of Canada. With coastal defense hot on their trail, the u-boat heads inland and gets sunk by aircraft stranding six men at a trading post. At the post is a French Canadian trapper named Johnnie (Laurence Olivier using an outrageous accent) who is not even aware there is a war on. His friend informs him how nasty the Nazis are. Johnnie thinks that it is none of Canada’s business. Do you think he will change his tune? The Nazis take over the post taking the Canadians captive. An Eskimo (lower than Negroes to them) is killed.

Four of the Germans manage to escape in a plane, but it crashes in a lake when it runs out of gas. Now there are four. They meet a teenage girl (an angelic Glynnis Johns) named Anna who welcomes them to her Hutterite (similar to the Amish) community. The community is utopian and communistic (note the year the movie came out). Would you believe Anna’s father was killed in Germany because he called Hitler the “anti-Christ” and her mother drowned on a ship sunk by a u-boat? The leader of the Nazis, Hirth (a loathsome Eric Portman) can barely stand this group of pussies. However, the conscience of the quartet, Vogel (Niall MacGinnis), helps the Hutterites bake bread.

With a storm in the background (get it?), Hirth misreads his audience by giving a bombastic speech referring to Hitler as a god. This does not go over well with the Hutterites (and presumably with the American filmgoers). The Hutterite leader Peter (Anton Walbrook) gets equal time for rebuttal and gives an impassioned condemnation of Hitlerism. He wins the debate. Hirth decides to move on, but first they kill Vogel before he can spend the rest of his life happily baking bread.

They have 2,000 kilometers to go to get to safety. They walk, steal a car, hop a train. They end up in a crowd when a Mountie makes a speech warning that Nazis are in the crowd. Look around at anyone suspicious. One member of the trio panics and is caught, then Hirth and the other make an improbable escape to the woods where they meet a pansy rich guy appropriately named Philip Armstrong Scott (Leslie Howard, who else?) They pull a gun on him and run off, separating in the process. Scott tracks the guy who is not Hirth to a cave. He boldly marches in counting the bullets as they are fired. The last one hits him , but he knows it’s the last one so he is clear to kick some Nazi ass (sadly off camera for those who wanted to see Leslie engaged in ass-kicking). Scott: “One armed superman versus one unarmed decadent democrat”.  No contest!

Hirth moves on and is almost home free in naively neutral America when he encounters an AWOL Canadian soldier Andy Brock (Raymond Massey) in a train boxcar. He points a gun at Brock and takes his uniform. They debate Nazism versus democracy. Hirth can afford to be smug because now that he has crossed Niagara Falls he is in America. Unhappy ending, right? Guess again.

Classic or antique? An antique with dust covering it. This movie does not hold up well and could only have existed as a good movie in the context of its release. Looking at it sixty years later, it is laughably quaint. It is painfully propagandistic and much too preachy. Much of the dialogue reads like a 1940s Civics text book.

By the way, at the bottom of the movie poster it shows Laurence Olivier carrying a blond in a blue dress.  Nothing remotely like that happens in the movie.