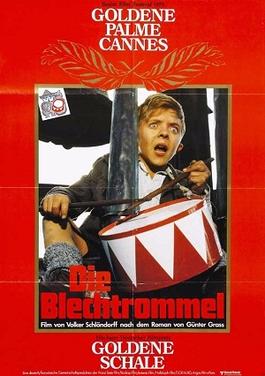 BACK-STORY: “The Tin Drum” is a 1979 German war movie based on the novel by Gunter Grass. The movie is set in WWII Danzig. It was directed by Volker Schlandorff. It is one of the most critically acclaimed war films of the 1970s. It shared the Palme d’Or with “Apocalypse Now” at Cannes and won the Best Foreign Language Film at the Academy Awards. It was banned in Oklahoma because of an underage sex scene.


OPENING SCENE: The movie is narrated by a little boy named Oskar (David Bennett). He flashes back to his grandmother hiding his future grandfather from the police by allowing him to take refuge under her skirt. They get married and have a child, but later his grandfather disappears. This part of the film has the feel of a silent movie, but with color and sound. You know immediately that you are in for a wild ride.

SUMMARY: We see Oskar’s birth from his POV. He did not want to be born and is only happy when his mother gives him a toy drum at age three. Because he is disgusted with the adult world, he decides he does not want to grow up. To achieve this goal, he throws himself down the basement stairs and like magic, his body stops aging! But if you think this is a Disney movie, think again.

This is one creepy kid. Imagine if Linus was to emit a piercing scream whenever anyone tried to take away his blanket. I’m talking glass shattering scream here. He also tends to beat the drum like a monkey on crack whenever things don’t go his way, which is often. Don’t get me wrong, the adults in his life are no saints. For instance, he catches his mom having an affair with her cousin (“Uncle Jan”). There is a ménage a trois taking place in his home. His father joins the Nazi Party and his “uncle” remains a loyal Pole.
The film is a series of bizarre scenes. Oskar takes up with some circus midgets. He goes to a Nazi Party rally where his drumming causes the band to break into waltz music resulting in everyone starting to dance. One of the many WTF moments in this odd film. In another scene his mother commits suicide by eating too much raw fish. You’ll never want to pig out on raw fish again. Skip the popcorn for this movie.

The war comes to Danzig and Oskar and “Uncle Jan” (his mother’s lover) are caught in the post office. They play cards as the building collapses around them. Jan and the other Poles are shot, but Oskar survives. Next, Oskar hooks up with a sixteen year old girl who comes to work for his father. He is also sixteen chronologically and hormonally. They have a very disturbing sex scene that is way beyond the morals of Oklahoma, but would creep out people living in Greenwich Village. Later, he catches Maria with his father (naturally). Maria gives birth to a child, but whose child?


Oskar joins a group of midgets who entertain the troops. They dress in German uniforms. He falls in love with a little woman, but she is killed by a lone artillery shell when she goes back for one last cup of coffee before they escape the advancing Americans. Are you still with me? He returns home.

CLOSING: Russian soldiers arrive in Danzig. Oskar gets his father killed for no apparent reason in a scene that is ridiculous even by this movie’s standards. At the funeral, he throws his drum into the grave and vows to age again. This is accomplished by his being conked on the head with a rock by his brother (son?). Remember that cure if you ever fall down some stairs and stop aging.

WOULD CHICKS DIG IT? Certainly more than men (at least men who like war movies). It is bizarre, but not graphic. It can be disturbing, however. I do not recommend it for any pregnant women, by the way.

ACCURACY: Accuracy is not a factor in this movie. But for those of you who are on drugs while watching this movie (which might not be a bad idea), allow me to point some things out.. There are tin drums and they can be very annoying in the hands of kids. You cannot stop aging by throwing yourself down the stairs. Seriously, the attack on the post office and the execution of the captives is accurate. Danzig was occupied during the war, but it was largely destroyed by the time the Russians arrived, a fact that is not made clear in the film.

CRITIQUE: In 1979 at the prestigious Cannes Film Festival, two war movies tied for the top prize. One of them is a great movie, the other is “The Tin Drum”. That’s right – just as many Cannes film experts chose this movie as chose “Apocalypse Now”!  I am not a film expert, I can only speak as a war movie lover who has seen a lot of war movies. “The Tin Drum” is like a bad poem that no one wants to groan at because they think it will make them seem uncultured. This situation reminds me of the old tale “The Emperor Has No Clothes”. I’m the guy in the crowd yelling “The Tin Drum” is naked!

The main character is despicable and unlikable. He is the opposite of cute. If you encountered him you would have a hard time not punching him in the face and stomping on his little tin drum. I think the movie intends for us to root for him over the corrupt adults he is rebelling against. Mission not accomplished.  He is not a rebel, he is a brat.  He does not symbolize the loss of innocence brought on by the war, although people insist on seeing this.

The film is visually striking. It does keep your interest. The acting is adequate and you have to admire the performance of Bennett. The look of Danzig (other than the lack of destruction) is authentic.

Many of the scenes are ridiculously bizarre. And don’t tell me it’s supposed to be weird and allegorical. I got that, but there is effective bizarre and WTF bizarre. This movie is WTF bizarre. For instance, Military History magazine’s review praises the family dynamic as a satire of Hitler’s family. How is this similar to Hitler’s family? Is this something that Grass admitted to or is it something critics have “deciphered”? Either way, it is nonsense.

CONCLUSION: I am glad to report that “The Tin Drum” is not a bad war movie because it is not a war movie. It is an odd tale set in a war. Regardless, it’s placement at #60 is beyond comprehension.  (I am no big fan of the similar "Come and See", but it is a much better war movie than this.) It is in the running for least deserving member of the 100 Greatest list. I expect professional critics to be fooled by “art” like this, but the panel of experts put together by Military History magazine? Shame!