SHOULD I READ IT? Army of Shadows 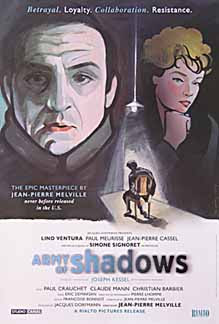 “Army of Shadows” (“L’Armee des Ombres”) is a French movie by acclaimed director Jean-Pierre Melville. It is based on the 1943 novel of the same name by French Resistance member Joseph Kessel. Originally released in 1969, it was hammered by the French critics for its supposed pro-De Gaulle slant. The backlash ended its chances for U.S. distribution until its reissue in 2006. It became a critical darling and made many critics’ Top Ten lists. Some had it as the best movie of 2006.


The movie opens with a German band marching through the Arc de Triomphe in a long shot toward the stationary camera. (This scene was originally placed at the end of the film.) Nice start. It is October, 1942 and we meet the main character Gerbier (Lino Ventura) who is under arrest for Resistance activities. He is one cool customer. When he is transferred to Gestapo headquarters, he stabs the only guard and escapes. (This will not be the last implausible thing to happen in this movie.) Gerbier is part of a Resistance cell. Their lives are in constant danger, but they patriotically take it in stride. They live by a code and of course the worst violation of the code is to rat on one’s comrades. In one scene, they strangle a traitor because they cannot use a gun. Powerful.

Gerbier recruits a young hot shot pilot named Jardie (Jean-Pierre Cassel). He joins the group that includes agents with cool nicknames like Le Masque and Le Bison. Unfortunately, Gerbier’s best friend Lepercq (Paul Crauchet) gets arrested while Gerbier is in England consulting with the British. He returns, parachuting from one of the most fake airplanes in cinema history. Mathilde (a matronly Simone Signoret) has a plan to rescue Lepercq from deep in Gestapo headquarters. Piece of cake, right? Meanwhile, Jardie takes it upon himself to get arrested hoping that the Germans will suspend logic and put him in the same cell as Lepercq. Mission accomplished! Mathilde’s rescue squad arrives disguised as an ambulance crew, but Lepercq has been tortured to the point of death and he can’t be taken so all this is for nothing. WTF? (And by the way, Jardie’s arrest plays no role in the success or failure of the plan.)


Later, Gerbier is picked up in a routine raid. He and others are to be executed, but not by firing squad and before he can be tortured like Lepercq (wait, what?) It is not a simple execution thankfully. The victims are told to run down a corridor while a machine gun fires at them from behind. Luckily, Gerbier decides to be a coward and run instead of taking it like a man. I say lucky because Mathilde has somehow learned of the exact time of this bizarre event and is stationed on the roof of the corridor which conveniently has an opening for her to toss some smoke bombs to blind the machine gun and a rope to hoist Gerbier to safety. I am not making this up. Critics undoubtedly fawned over the lighting in this scene.

Gerbier is whisked to a safe house where he must lay low for an incredibly long and boring time. Go use the bathroom and take a nap during this part of the film which feels like it is taking place in real time. While watching the paint dry in the house, Gerbier is visited by Le Grande Fromage who tells him Mathilde has turned her coat to protect her daughter. The code deems her death-worthy and so they do a drive-by on her. A post script tells us she is not the only one of our less-than-merry band to not collect their French Resistance pensions. This is not a feel good movie.

I sometimes disagree with critics, but seldom as vociferously as with this movie. This movie is boring! It drags and is way too long. Some scenes seem to move at a snail’s pace. It is pretentious (which may explain some of the critical acclaim). It also has some ridiculous scenes which I have to assume were the author’s attempt to jazz up a novel that was supposedly about true events. I will admit the acting is good and the cinematography is well done, but that does not overcome the plot (or in this case, the plod). The incredible thing is I am way out on a limb on this one. Virtually no critic had anything bad to say about it. Normally I would admit I need to watch it again, but I’d rather take my chances trying to outrace a machine gun down a long corridor.