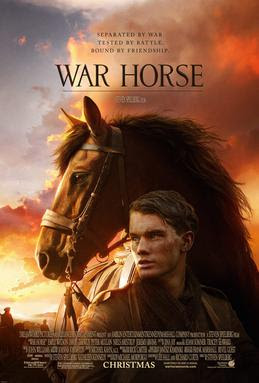 Steven Spielberg’s “War Horse” opened on Christmas day and I attended the first feature. Being a war movie buff, I have eagerly awaited this movie, but with trepidation because Spielberg has been known to get juvenile in his movies, especially recently. The movie is based on a children’s novel and an acclaimed stage play. The movie has generated numerous awards nominations and could end up as one of the more important films of the year. But how is it as a war movie?


The movie opens with the birth of a colt in Great Britain. The birth is witnessed by a farm boy named Albert (Jeremy Irvine). Albert falls in love with the horse and in a happy coincidence his father decides to outbid his evil landlord for the horse at an auction where his farm desperately needs a work-horse. “Joey” (as Alby calls him) is no work-horse and his mother Rosie (Emily Watson) rightfully thinks her husband is daft. They can’t get rid of the horse because Alby really wants a pony. In a cliché-busting scene, Joey proves to be easily trainable and very smart. When the landlord (David Thewlis) threatens to take back the farm if the drunken, loser father (Peter Mullan) does not make a rock-strewn field productive, Alby hitches him to a plow and (with the help of a fortuitous rainstorm that quickly softens the ground) the horse earns his keep.

The father’s love of the bottle is explained by his soldiering in the Boer War. He was decorated, but does not talk about it. Rosie theorizes that “he refuses to be proud of killing”. He is so down on his luck that when the plowed turnip field is ruined by rain, he is forced to sell Joey to the military. The horse goes off to war as the underage Alby stays home.

The movie from this point on is basically another take-off on Homer’s “Odyssey” with Joey meeting several interesting new owners and facing dangers. Here is a summary:

2. Two German brothers acquire the horse who is to be used as an artillery-puller, but instead is used as a getaway horse as the elder brother rescues the younger from a column heading for the front.

3. A feisty young French girl named Emilie is the next owner. Before she can break her brittle bones riding recklessly, the German army requisitions the horse and its back to the artillery.

4. An animal-loving German lets Joey escape when his usefulness is approaching bullet-in-the-head time. In the process, in a scene of heavy-handed symbolism, Joey escapes from a tank and then runs down a trench and then through no man’s land. Unfortunately, Joey gets entangled in barbed wire.

5. A Tommy and a Fritz use wire-cutters to free Joey and he rejoins the British Army.

6. Joey is reunited with Alby at a hospital where Alby barely convinces a doctor not to put his wounded horse out of his misery.

7. Joey is bought at auction by Emilie’s grandfather, outbidding Alby (and a butcher).

I’ll stop right there to and let you wonder if the movie has an ‘Old Yeller” ending. Don’t read the next paragraph if you do not care if a movie has ridiculous moments.

Where do I start? Joey becomes BFFs with another cavalry horse named Blackthorn. They are captured together and after it is unsubtly made clear that if you don’t work you die, Joey “volunteers” to take Blackthorn’s place pulling a cannon. The whole scene with the German brothers is laughable. When the deserting brothers are captured, the older brother does not insist he forced his unwilling brother to come along and they face the firing squad together. Or why would a tank chase after a lone horse? You have to suspend disbelief a bit in this movie.

Historically speaking, the movie is based on a children’s book so what do you expect. However, since Speilberg had to assume some adults might want to see it, he could have at least read one WWI history book. (This is his first WWI movie after six about WWII.) Before the big cavalry charge scene, the British commander references famous successful charges, including Pickett’s Charge. Surely, even an Englishman would know Pickett’s Charge should not be mentioned to boost morale. The charge itself adequately depicts the suicidal nature of WWI cavalry attacks. I assume the attack is fictional and it is possible that the Germans could have been stupid enough to camp in a field with no entrenching or even guards posted because its early in the war. It is also possible they may have emplaced a line of machine guns behind their tents. Highly unlikely, however. By the way, that line of machine guns is incredibly accurate as they knock off riders without hitting horses.

The “Saving Private Ryan” moment comes two-thirds of the way through the movie. Incredibly, Spielberg decided to label the battle “1918 – The Somme”. You don’t have to be a military historian to know the very famous Battle of the Somme was in 1916. Alby is now at the front in a Pals’ Battalion with his best friend and a snooty rich kid acquaintance. The trench sets are realistic and no man’s land is appropriately hellish. The British assault is bloody (without blood) and violent (but not graphic). Alby reaches the German trench first and it is empty with all the Germans dead. Wait, what? To make matters worse, Alby is blinded by a poison gas bombardment that hits directly in the trench. What accuracy! This works out for plot purposes as Alby needs to be sightless for his reunion with Joey.

Being a Spielberg movie, certain things are guaranteed. The cinematography is lush in the bucolic British countryside scenes and colorless in the muddy Western Front scenes. John Williams’ score plays on the audiences emotions throughout. You don’t have to think much, Williams will let you know how to feel. For example, plowing the field – cue the inspirational music. The acting is satisfactory, if unspectacular. The horse (actually eight horses to portray the adult “Joey”) is amazing and its accent does not change, unlike some of the humans. The film does avoid some obvious clichés. The horse is not hard to train. Alby’s potential rivalry with the rich boy over a local girl ends up on the cutting room floor. Emilie does not have an accident. It’s not unorthodox in its cartoonish villains, however. The evil landlord. The martinet German officers. Hiss him, cheer that, cry now. The movie very effectively manipulates the audience’s emotions. Most people will get what they paid for.

The problem is that Spielberg has made the kids’ version of a war movie. He even includes a goose for comic relief. How Disneyesque! The “it’s a small world” on the Western Front aspect is to be expected from any mainstream movie, I suppose. For those expecting the WWI equivalent of SPR in the combat scenes, consult the movie’s rating and target audience. Even the cavalry sabers (inaccurately called “swords” in the movie) remain unbloodstained. Realism is not a forte of this movie. “War Horse” is a good movie for civilians, but it is not a good war movie.