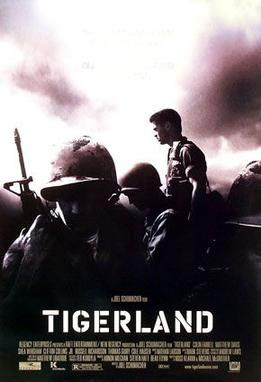 “Tigerland” is a Joel Schumacher (“Batman Forever”) film released in 2000. It was barely noticed when it was in the very few theaters it played in. Since then it has developed a reputation as one of the better Vietnam War films. Is this revisionism justified?


The movie is loosely based on the Army’s advanced infantry training school located at Fort Polk in Louisiana. Tigerland was designed to mimic conditions in Vietnam and prepare grunts for combat in the Nam. The movie is set in 1971 which means the war is in its final stages and the soldiers have a widespread belief that the war is lost and dying in Vietnam will be useless. The brass is portrayed as interested in sending cannon fodder to Vietnam, but keeping them alive as long as possible.

The main character is Roland Bozz (Colin Farrell) who is a charismatic troublemaker. He is insubordinate, disobedient, and insolent. He is an anti-hero in the mode of Sefton (William Holden) in “Stalag 17”. We first see him coming out of the stockade far from chastened. He befriends an enlistee named Paxton (Matthew Davis) who is in the Army for the “experience” which will lead to a book. He keeps a journal. The rest of the platoon is typically heterogeneous. Besides the boat-rocker and the intellectual, we get the psychopath Wilson (Shea Wigham), the country bumpkin Cantwell, the father’s disappointment Miter (Clifton Collins, Jr.), and a bunch of black guys. The drill sergeant makes Sgt. Hartman from “Full Metal Jacket” look like a pussy cat. He physically and verbally abuses the trainees, especially Bozz. It doesn’t help that Bozz yanks his chain at every opportunity.

The movie takes us through the training. You get the impression that the Army has gotten very cynical at this point. There is a training session on how to torture prisoners. Apparently, the My Lai Massacre has not filtered down to Tigerland. The soldiers are often told they will return home in a box. The training appears to be aimed at taking as many gooks with you as you can before you inevitably get killed. Another theme seems to be that you create leaders by breaking all the obvious candidates until you arrive at the most unlikely. Miter is promoted to platoon leader and then given the impossible task of taming Bozz. When he fails, he is humiliated into a mental breakdown. Guess who is chosen to replace him? Guess who accepts this new role? If you can’t break them, put them in command.

Bozz is a popular platoon leader because he voices what many of the men are feeling. His charisma draws them to him. It helps that the Army forgoes its usual policy of punishing the unit for the misbehavior of one troublemaker. The screenwriter does not allow Bozz to become Private Pyle from FMJ. Bozz is also popular because he has a knack of getting soldiers discharged. He is a “barracks lawyer” and gets both Cantwell and Miter sent home (which they both deserved). Why doesn’t he free himself? At one point he tells Paxton “I’m not that brave”. WTF Bozz’s motives are unclear throughout the film.

Bozz makes a enemy of the bigoted, super-patriot Wilson. (Wilson makes Animal Mother from FMJ seem stable.) Wilson tries to kill Bozz on the pistol range and only a miraculous misfire saves Bozz. The commander decides not to court-martial Wilson for attempted murder. Apparently the post My Lai Army needs as many psychotic killers as possible. At a time when we were drawing down in Vietnam , “Tigerland” would have us believe the Army was desperate enough to hang on to a Wilson type.

In Tigerland, Bozz’s squad is given the task of masquerading as Vietnamese villagers. Surprise, the patrol that arrives tasked to find the VC in the village is led by Wilson! Not only has he not been court-martialed, he has been promoted! Tigerland should have been called Bizarroland. There is a dust-up that results in the fourth fight between Bozz and Wilson (if you are scoring, it’s Bozz 3 - Wilson 1). That night Bozz sneaks off to go to Mexico in spite of Pvt. Johnson’s guilt-tripping about leaving Paxton to Wilson’s mercies. Next morning, the squad awakes to Bozz’s abandoned bedroll. Psyche! Bozz comes strolling in from taking a pee. Guilt-tripping works on the idealistic. The day’s activity is another bout with psycho squad. In an ambush situation, Wilson removes his blank firing adaptor and puts in live ammunition. Will he finally kill Bozz? Watch and find out.

It had been a long time since I saw this movie. A recent review by my bunkie at All About War Movies rekindled my interest. My first impressions were confirmed. It is an interesting little movie, but the implausibilities sink it in the end.

The camera work makes it look like an independent film. There is a lot of quick cutting and hand-held. There is even some POV. The live-fire exercise has a “Band of Brothers” look to it. It is well acted although the characters are either one dimensional or two-faced (Bozz and Paxton).  Farrell makes a strong impression in his first significant role (and the first significent showing of his backside, ladies) . The villains are cartoonish, but the actors make the best of it. The friendship of Bozz and Paxton is realistic. Strange bedfellows.

The movie is not so much anti-war as it is anti-military. The heavy-handed depiction of the brutalities heaped on the recruits is diluted by the films unbelievable depiction of the Army putting up with a psychotic (Wilson) and a cancer (Bozz). The brass come off as brutish, yet coddling. An unusual combination.

Where the movie gets it right is in its feel for the state of the war in 1971. Morale was low even amongst the officers. The platoon reflects the draft net that tended to capture the poor and the down on their luck. The characters are appropriately depressed about their prospects and this explains their admiration for an anti-hero like Bozz. You do get the impression that the trainers are frustrated with having to prepare reluctant men to serve a country that is now reluctant to put much effort into the war. You can sympathize with both sides.

The movie is definitely thought provoking. Most of those thoughts start with the word why. Why does the Army put up with Bozz and Wilson and even promote them? Why doesn’t Bozz free himself? Are we supposed to like Bozz?

Is this movie going to crack the 100 Best War Movies list? No. It is worth seeing, but it is not in the front rank of Vietnam War movies. Full Metal Jacket’s boot camp half is still the gold standard.