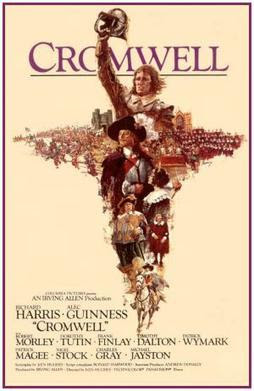 “Cromwell” is a biopic of Oliver Cromwell released in 1970. It is a good example of how it’s not just American filmmakers that abuse their nation’s history. (In this review, the blue notes are the true history.)


The movie opens with Cromwell (Richard Harris) as an ex-member of Parliament at home living the life of a country gentleman. He is upset with the taking of common land by the nobility and the king’s encouragement of Papism. He threatens to emigrate to America. When a delegation from Parliament arrives and tries to enlist his support against the king, Cromwell throws them out of his house. In reality, Cromwell was already a member of Parliament and there is no evidence he thought of going to America. He was upset about the king’s policies, but was reluctant to rebel. Later, Cromwell goes psycho in his local church because of the Catholic trappings. Cromwell was a fanatical Puritan who was very anti-Papist.

King Charles I (Alec Guinness) calls Parliament to raise funds to deal with a Scottish invasion. When Parliament demands reforms in exchange, Charles (influenced by his queen) responds with “divine right of kings” and attempts to arrest Cromwell and other key members of Parliament. Cromwell was not one of the five. The English Civil War begins.

At the Battle of Edge Hill, Cromwell brings pre-battle negotiations to an abrupt halt by firing a cannon. (Did Mel Gibson copy this idea for “Braveheart”?) The Roundheads attack, but cannot break through the Cavalier pikemen. The king’s infantry advances and Prince Rupert (Timothy Dalton) leads a cavalry charge. Cromwell counterattacks to restore the stalemate and later, the Roundheads withdraw. The battle is fairly realistic with musketeers using rests and pikemen pushing. It is also appropriately chaotic. The battle did open with a cannon fired by Parliament, but it was not fired by Cromwell because he did not reach Edge Hill until after the battle. Rupert actually launched the first attack followed by the infantry. The Roundhead commander (Essex) did order a retreat. BTW the battle lasted longer than the five minutes in the movie.

Cromwell returns home to raise his famous Ironsides unit. We get a training montage, naturally. The movie skips the very important Battle of Marston Moor in which the Ironsides were a factor for the first time. I guess they did not want the movie to run an extra five minutes. At the Battle of Naseby, Cromwell is outnumbered. It was the opposite. Cromwell opens the battle with a charge. Rupert responds with a countercharge and Cromwell uses feigned retreat to lure Rupert into the musketeers and pikemen. Cromwell returns and Rupert retreats and the battle is won. Almost total bull shit. Rupert opened the battle with a charge on the opposite flank from the Ironsides which carried him off the battlefield. The opposing infantries were toe to toe when Cromwell ran off the Cavalier cavalry on the right and then wheeled inward to take the king’s infantry in the flank. Sadly, Cromwell’s son is killed in the battle. Just as sadly, but not heroically, he died of small pox a year earlier.

Cromwell is appointed Commander in Chief of the New Model Army. He was second in command to Thomas Fairfax. With the war won, he arrests the king. Charles was handed over by the Scots. Cromwell takes over Parliament by force. This probably references Pride’s Purge which Cromwell was not part of. Cromwell tries to negotiate with the king to get him to accept a constitutional monarchy and when the king proves to be intransigent, Cromwell demands his head. There was no negotiation and the king was condemned because he had plotted the Second Civil War. The trial and execution are well done.

Cromwell retires to his home for six years. This is a bit different than him going off to conquer Ireland! A delegation arrives to persuade him to become king. Cromwell laughs, then rails against them and their preposterously undemocratic idea. Actually, he toyed with the idea and decided against it because the army was opposed. Cromwell returns to Parliament and reluctantly dissolves it. He takes power by military force and vows to bring good government. Pretty close. Movie post script: he did! Most historians agree.

This is more of a biography than a war movie. You can’t really be called a war movie when your two battles last about five minutes each. The truth is that it is not even a good biography. Harris overacts, as usual. He does capture Cromwell’s stick up his arse personality, however. Guinness is outstanding as the king and brings quiet dignity to the stubbornly incompetent monarch. As a period piece, it does take us back to 17th Century England. It won the Academy Award for Costume Design. The Roundheads are invariably dressed much more commonly than the Cavaliers when in reality there was little differential. Also, the New Model Army is wearing black and gold coats instead of the iconic red coats. To set the mood, we have to listen to some truly pompous music and hymns.

In conclusion, are the British as historically illiterate as Americans or did they recognize the numerous errors in this movie? I would hope they were upset with the finished product. What is perplexing is the deviations are so blatant they would appear to be insulting to British history. The Battle of Naseby, which is probably in the top ten most important battles in British history, is reenacted almost the opposite of what actually happened. Hurray for Britain’s equivalent of Hollywood!
6/10