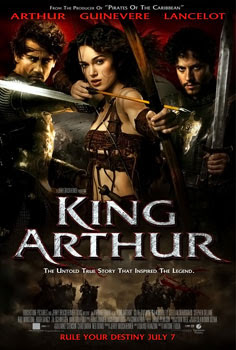 I am trying something new with this one. It’s called a “Live Review”. As I watch the movie, I jot down my feelings and observations. I suppose it works best for the reader of this blog if you have already seen the movie. You then can agree or disagree with my take.  Roll it!


Words on screen – “recent archeological evidence sheds light” – oh, good, this is going to be historically accurate! Narration with map – Rome is greedy. They conquer the Sarmations (never heard of them) and force their young ‘uns to be in their cavalry. The narrator is Lancelot. The year is 452. I don’t think Rome controlled Eastern Europe at that time. Epic music. Now we are in Britain. Beautiful scenery. Now we meet Arthur (Arturius - Clive Owen). His father was a commander in the Roman army.

It’s 15 years later. That would be 467 (Rome fell in 476) – wow, that’s very close to the end. Was Rome still in Britain? Arthur and his “knights” are watching a Roman convoy from the woods. Is this a Robin Hood movie? Woads (never heard of them) attack the train (it carries a bishop). Graphic violence. Each knight gets kill coverage. Frenzied. Some slo-mo. One of Arthur’s men has a composite bow (very unlikely) and shoots a guy in the eye! Arthur spares one of the enemy. Will he meet him again? Duh! The Woads were sent by Merlin. Wait, he’s a bad guy? A reference to Excalibur. The bishop was disguised as a Roman soldier, so he survived.

They return to a Roman castra (fort). There is talk of them getting their discharges and returning to Sarmatia. This is going to be a short movie. Arthur wants to make a trip to Rome and see the Pope. He is religious. Lancelot (Ioan Gruffudd) is a ladies’ man. Bors is gruff. Gawain and Galahad are buddies. Tristan is weird.  Dagonet is sensitive. Will something prevent their discharge? Duh! Arthur has a round table with many vacancies. The bishop back stabs them and orders them on a suicide mission to rescue the next pope north of Hadrian’s Wall. They are upset, but realize we will not have a movie if they don’t go. Lancelot argues against it, but remains loyal to his BFF. He asks that his body be cremated if he is killed. Crap, Lancelot is dead meat! Now we have a suicide mission movie on our hands. Who will survive?

Who’s this Viking looking dude? He’s a Saxon and he is mean and a racist (no raping British women, only killing). He does some things to prove it. He has a evil lackey son with a weird chin rat-tail. Our heroes are off on their quest. Dead guess – all but Arthur and Bors (he has a family). They are ambushed in the woods, but the woads don’t do anything to them. Why? Will Arthur link up with them to fight the greater of two evils? Duh!

They arrive at a walled estate north of Hadrian’s Wall. What are Roman’s doing north of the wall? Ridiculous! The Roman noble is a jerk who abuses his serfs. Will he get his just reward? Duh! Arthur puts a stop to the abuses. Free will, blah, blah, blah. His priests are torturing pagans. One of them is a woman. It’s Guinevere (Kiera Knightley)! Arthur decides to take all the serfs along back to Roman safety.  He's humane.  He does not belong in the Dark Ages.

Trek music. It’s snowing. It has to get cold so a lake will freeze. It freezes very rapidly. Guinevere is a woad! She and Arthur make a connection over dislocated fingers. Romantic. She accuses Arthur of going Roman. There is tension, will they get married? Duh! There is a traitor advising the Saxon king. Will he get his? Duh! Lancelot sees Guinevere bathing. Here we go! Lancelot and Guinevere flirt. She asks him if he is from the Black Sea. Guinevere knows her Roman Empire geography. Will this become a love triangle?  Duh!

Merlin offers an alliance. Apologizes for killing Arthur’s mother. Flashback: during Woad attack, boy Arthur pulls Excalibur from his father’s gravesite. Will Arthur hook up with the woads? Duh! The evil noble seizes a boy in order to kill one of Arthur’s knights. Wait, why? It gives Guinevere the chance to kill him with an arrow thus revealing her badassness (and remarkable recovery from her torture stint).

The knights fight a rearguard action against chin rat-tail on a frozen lake. The constant creaking tells us the ice is unstable. All of Arthur’s knights are great archers! Jacks of all trades. They shoot the wings to get the Saxons to mass their weight in the middle. Genius! But it doesn’t work. Dagonet runs out and uses his axe to break the ice.  Literally. Will he die nobly in the process? Duh! One down. Cool shots from below the ice and then of the ice breaking. Mass chaos. Arrows hitting Saxons under the water. Hello, “Saving Private Ryan”. Suddenly, they are back at home. Only one dead on the suicide mission. I am stunned. They get their discharges. The bishop was not lying! Is the movie over? Meanwhile, the Saxon king demotes his son and slashes his cheek and chuckles. Hiss!

Arthur and Guinevere start pawing each other. Damn, Saxon interruptus! Arthur decides to stay and fight the entire Saxon army by himself. His men are determined to leave with the rest and enjoy their freedom. Who can blame them? Will they change their minds? Duh! The drums of war. Horses paw the ground. Looks exchanged, but no words. Next thing we know they are all dressed as cataphracts (except Tristan who is a Mongol) and riding with Arthur. Game on! 5 versus 1,000. Sounds fair. Parley with Saxon king. They are both badasses. I think one of them will not survive. The battle opens with Tristan shooting an arrow over the wall to kill the traitor who is in a tree. Come on! LOL Most ridiculous moment in the movie.

Arthur lures the Saxon infantry through the open gate while the Saxon king waits where he cannot see what will transpire. Convenient. Someone magically closes the door behind them. The fields have hay stacks on fire. Why? How will 5 guys take them? Wait, Guinevere and her boys (and girls) launch a blizzard of arrows. The knights swoop in and slash away in the smoke from the fires. (Oh, now I get the fires) Blood spraying. No good guys wounded, all bad guys killed.

The rest of the Saxon army charges through the gate. There is no big pileup. They are very polite.  After you, no I insist. What exactly was the purpose of that wall? I thought it was to keep barbarians out. The Saxon army is undefeatable unless Arthur has something up his sleeve. Does he? Duh! In the grand tradition of Hollywood epics (Spartacus, Gladiator), it’s fire! The pitch spread on the battlefield is set afire by fire arrows. Fire – the great equalizer. Let the melee begin. Guinevere (nice costume, but boy is she flat-chested) and the Woads switch to swords. Mucho slashing and splashing. This is not your usual Guinevere. Cue the fireball throwing trebuchets. Explosions – check! Quick cuts between the heroes hewing. Now they start taking wounds, but fight on. Guinevere takes down the second in command (with the help of her girlfriends). Tristan versus the king. There is no way Tristan will win – doesn't he know the king’s death is reserved for Arthur? Two down. Lancelot rides to the rescue of Guinevere, but chin rat-tail uses a crossbow (not a manly weapon) to mortally wound him. Lancelot throws a sword to impale him. Three down.  No sequel.

Saxon king versus Arthur. Clang, clang!  Repeat numerous times.   Round one: Arthur. Round 2: Saxon. Round 3: Arthur. Round 4: Saxon. Round 5: Arthur. Suddenly the battle is over. Lancelot is cremated. Narrator mentions the Battle of Badon Hill. Wedding of Arthur and Guinevere. Woads and Britons unite. Arthur is proclaimed king. Three horses running free. Sappy! Death rate of knights – 50%.

“King Arthur” purports to be a more accurate historical retelling of the Arthur legend, but much of it is as hard to swallow as the legendary tales. The plot is predictable, with a few interesting surprises like the suicide mission being less than suicidal. There are numerous clichés. For example, Lancelot has to die nobly to clear the way for the wedding. The villains are all very hissable, although the Saxon king has some gravitas.

The movie is not bad as an action epic. The violence is graphic and intense. The acting is very good. The dialogue is fine, if a bit trite and these people speak very well for early medieval types. Arthur also has a very liberal view of democracy for someone who will be a king. He is too good to be true. The characters are pretty well developed. They get their moments although Gawain and Galahad are short-changed. The music is typical for an epic which is not bad.

I know it may not come across, but I actually liked the movie.  It is fun and I like taking the legend and removing the magic (kind of like "Troy").  It is a good companion to "Excalibur", although I like "Excalibur" better.

How historical is it?

1.  It is set in the Early Middle Ages which is appropriate.  No knights in plate armor.
2.  Arthur being based on a Romano-Briton chief is based on the best estimate we have.
3.  Rome was out of Britain by 410.
4.  The Picts were not called Woads.
5.  The Anglo-Saxon Chronicle mentions a Saxon Cedric and his son Cenric coming to England (but southern England, not north of the wall) and establishing the kingdom of Wessex.  However, they were not killed at the Battle of Badon Hill.
6.  The Sarmatians were Roman auxiliaries in Britain.  They were equipped as cataphracts (roughly what they are depicted as in the last battle).  The theory that Arthur and his knights were Sarmatians is disputed.
7.  Saxons did not use crossbows and trebuchets were not in Britain then.  There were no stirrups yet.
8.  Archbishop Germanus actually died twenty years earlier and was actually a holy man.
9.  The opening claim that recent archeological evidence has cleared up some of the legend is a stretch.
10.  Knightley's breasts are not as big as on the poster.