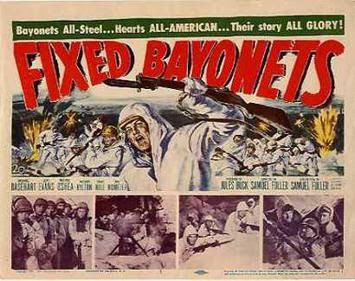 “Fixed Bayonets” was Samuel Fuller’s second Korean War movie after “Steel Helmet”.  It was released in 1951 and is dedicated to the “Queen of Battles – the U.S. Infantry”.  Fuller was a decorated veteran of the Big Red One in WWII.  His “Big Red One” has autobiographical elements.  The Army insisted that Medal of Honor winner Raymond Harvey be technical adviser after Fuller had stepped on Army toes in “Steel Helmet”.  Harvey and Fuller became close friends during production.  The theme of the movie is:  “It takes more than brains – you’ve got to have guts to lead”.  The film is set in the initial stages of the retreat from the Chinese intervention of 1951.
The film opens with a general ordering a platoon of 48 men to fight a rearguard action to screen the withdrawal of the main unit.   As the rest pull out, the faces on the platoon indicate that they realize they are on a suicide mission.  They set up a road block and send out patrols.  When not on guard duty, the focus squad of soldiers (which include James Dean in his first role) huddle in a cave away from the frigid weather.  The unofficial commander of the squad is the crusty Sgt. Rock (you heard me) played by “Steel Helmet”s Gene Evans.  The main character is a Cpl. Denno (Richard Basehart).  Denno is tormented by his inability to kill other human beings.  He had been demoted for this and chastises himself for his reluctance.  He also has a great fear of having to command men in battle.  With the chain of command being whittled down, Denno’s fear is closing in on him.  He even risks his life in a minefield to rescue an officer so he will not have to move up the chain.  The dirty rat dies anyhow!  Before you know it, Denno is in command.  Surprise!  He rises to the occasion.  Surprise!
Denno is transformed by the circumstances.  He quells a revolt of the men who want to abandon the road block early.  “I’ll clobber the first guy that tries to bug out!”  He’s a leader now, but can he kill?  An enemy tank provides an opportunity for redemption.  Denno kills a scout and they take out the tank with several RPGs.  Unfortunately, a second tank arrives and it’s time to go.  Will they make it back to their main unit?
“Fixed Bayonets!” is gritty partly because it is low budget.  The sound stages are not going to fool anyone.  Neither is the fake snow.  However, kudos for being one of the first war movies to emphasize the effects of freezing weather on combatants.  Another effect of the low budget is the feeling that most of the scenes were done with few takes.  The movie has an almost quaint quality to it.  I would guess that audiences cut it some slack since it was covering events that were set in the very year that the movie was made.
The acting is fine.  Evans builds on his amazing performance in “Steel Helmet”.  The two movies were the height of his career.  Every character actor should have such on their resume.  He gets a great death scene.  “I told you, I’m dead”.  Basehart is also good.  His character arc is realistic and not maudlin.  It is very predictable, however.  The rest of the cast is average.
The dialogue is a strength.  The movie is not verbose.  The soldier talk is well rendered.  Not surprising given the overseeing by Fuller and Harvey.  The interaction in the cave is a highlight.  There is a foot massaging orgy that only a Fuller film would depict.  The unit dynamics are reminiscent of “A Walk in the Sun”.  There is a camaraderie that is evident and does not seem forced.  There is a soldiers’ thoughts segment similar to “Guadalcanal Diary”.  A little corny, but with some humor.  Speaking of dialogue, one flaw is the appalling lack of noise discipline by our rearguard heroes.  They do a lot of shouting.
The plot is too predictable.  Although the film does not beat you over the head with clichés, it has some obvious ones.  The best example is the redemption theme.  The killing off of the officers to eventually get to Denno was necessary and somewhat suspenseful.  I have to say that for a director who made a point of insisting his war movies were designed to make future wars more unlikely, Denno’s quick evolution to a killer tends to dilute that message.  Perhaps he should have remained the coward that he imagined himself to be.  But then, that would have contradicted the main theme of men rising to leadership when it is thrust upon them.
The movie has some good action scenes, but the low budget does not lend itself to anything spectacular.  There is a realistic artillery bombardment with good sound effects.  The minefield scene tends to drag on and does not have Denno using proper tactics to avoid blowing himself up.  Surprising since movie audiences had been tutored on the proper technique of slanted knife probing from numerous other war movies.  And boy, when they set up some dummies to fool the Chinese, those Chinese mortarmen are incredibly accurate in taking them out.
“Fixed Bayonets!” is an entertaining war film.  It is a step down from “Steel Helmet”.  If you did not know it, you would assume “Steel Helmet” was made after “Fixed Bayonets!”  Where “Steel Helmet” was a revelation and put Fuller on the map, I find “Fixed Bayonets!” to be a bit disappointing.  It is well remembered by critics which means I feel it is overrated.  Considering the competition from other Korean War movies, it is relatively good.  The war did not exactly bring out the best in Hollywood.


POSTER -  Check out that poster.  Did the artist even see the movie?  It is another example of studios gearing their advertisements to what they think the audience wants to see rather than what is actually on the screen.  One has to wonder what Fuller thought of the studio's approach to marketing what he clearly meant to be a film that deglamourized war.  "Their story ALL GLORY".  Are you kidding me?!  Glory is the one word Fuller would not have wanted to be associated with the film.  Here is the apporopriate slogan:  "Bayonets all bloody... Hearts and feet frozen... Their story ALL SURVIVAL"﻿
Posted by War Movie Buff at 10:55 PM