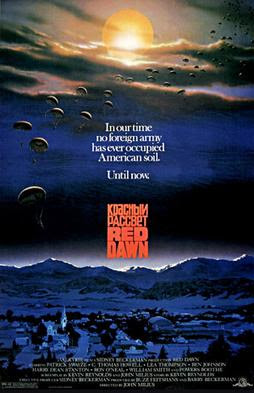 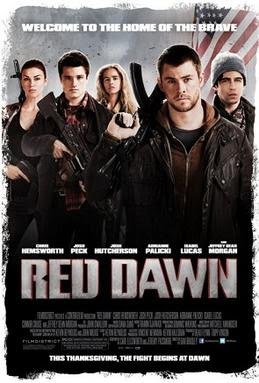 Oh, the things a war movie blogger has to do.  One of them is going to see the rare war movie release realizing that it will most likely be terrible (ex. “Battleship”).  I had put off seeing the new “Red Dawn” because it seems a useless remake of a bad film and I have been very busy with soccer.  However, I could not let my public down so I bit the bullet and headed for the theater.  Being a masochist, I also watched the original (which I have to admit I had not seen due to the terrible reviews it got when it came out).  What a day!  I have cemented my place in war movie heaven by spending some time in war movie hell.


“Red Dawn” (1984) actually has a pretty good reputation.  Apparently there were a large number of high school boys who saw it in 1984 and there are a lot of conservatives today that remember it fondly since it fit their fantasy of World War III.  It is definitely a curio from the Cold War days.  Specifically, the Russians in Afghanistan days.  The opening scrawl confusingly explains that NATO has dissolved, Mexico has gone communist, and the Warsaw Pact is on the move.  Before you know it, Cuban paratroopers are landing in Calumet, Colorado.  An idyllically all-American town that is of great strategic importance, I suppose.  A few high school boys join the slightly older Jed (Patrick Swayse) in the outdoors.  The crew includes his brother Matt (Charlie Sheen).  After some hand-wringing (and crying), they decide to become survivalists.  The movie is probably required viewing for militias.
The town is under occupation and any adults (like Jed and Matt’s father) with balls are in a re-education camp.  Books are being burned.  The weasely mayor is collaborating (he is a liberal).  There are three villains:  the Cuban Col. Bella (who is now on the receiving end of insurgency), a Soviet adviser (who believes in several eyes for an eye), and a counterterrorist expert Col. Strelnikov (the menacing William Smith) brought in to hunt down the insurgents.  When the gang (called the “Wolverines”) kills three Soviets, the commies react by executing civilians including Jed and Matt’s father.  It’s on now.  They are joined by two girls (Lea Thompson and Jennifer Gray) who insist on being treated equally and refuse to do the dishes as teenage boys in the audience snicker.  There is a montage of attacks (including on a Soviet tank crew that stops at a gas station to fill up with regular).
The director brings in Powers Boothe as a downed pilot to provide acting lessons and fill in the audience with how all this conquest came about.  Coming from him it almost seems plausible.  There are some bloody fire fights with old school deaths.  The movie supposedly set a record for body counts, especially for the first PG-13 rated film.  They keep getting whittled down, including the execution of one of their own (the mayor’s son) for swallowing a homing bug.  A couple more go in a surprise attack by vicious looking Soviet choppers straight out of Afghanistan.  The final set piece is Jed and Matt’s two man assault on enemy headquarters as cover for the escape of Danny and Erica to Free America.  Would you believe there is a duel between Jed and Strelnikov?  And an encounter with Bella?
“Red Dawn” (2012) has the same basic premise and some familiar elements, but differs in many ways, including tone.  The causes of the war are even more WTFish.  Something about all American forces being abroad putting out conflicts and this allows the North Koreans (with their fourth largest army in the world) to swoop in.  Their secret weapon is an electro-magnetic pulse thingy.  Who cares?  Not 14 year old boys.  The brothers are fleshed out a lot more.  Jed (Chris Hemsworth) is a Marine on leave.  Matt (Josh Peck) is the starting high school quarterback.  They are at odds with each other, naturally.  Matt is not a team player.  Each is also given a love interest.  Matt’s is the head cheerleader, surprise!  All he cares about is rescuing her and she isn’t even Megan Fox.  The gang is more heterogeneous and the girls are treated equally from the start.  We get a montage of training  instead of attacks.  Five minutes of montage can transform high schoolers into killing machines.
The main villain is a Col. Cho.  He is your typical inscrutable oriental villain.  The kind you can’t wait to see die in a nasty way.  The movie also throws in a Russian spetsnaz and a slimy collaborating teen.  Don’t look forward to their cathartic deaths.  Instead of one downed airman, this version drops in three crusty Special Forces types to teach and learn from the Wolverines.
The big finale also involves an assault on the headquarters, but with the purpose of acquiring a black box that will change the course of the war.  Or so we are vaguely informed.  There is a massive expenditure of ammo and the grand entrance of a tank through the wall of the headquarters.  Hey, it could happen.  There is a much cooler confrontation between Jed and Cho than between Jed and Strelnikov in the original.
How to compare the movies?  1984 has more explosions than 2012 (30-23) which is surprising.  2012 has many more crash-crazy car chases.  1984 drowns 2012 in tears.  It is one of the weepiest movies I have ever seen.  Even after they become tough warriors, they still bawl at the drop of a hat.  And I’m not talking about the girls.  There is a scene where Swayse and Sheen cry as they see their father for the last time that is hilarious!
1984 has many more terrible acting performances.  You can argue that Swayse and Sheen became good actors, but they certainly are not there yet.  The movie is one of the most poorly acted films I have ever seen.  The dialogue does not help.  At one point one of the gang actually says “Things are different now”.  You think?  The acting in 2012 is tolerable.  Hemsworth dominates every scene.  He is charismatic.  The rest of the cast does not stand out, but does not embarrass itself (except Peck who is wooden).  The dialogue has some groaners.  They are told “you made a difference”.  One of the special forces stoically states “it’s a good day to die”.  There’s the usual “I’m not going to leave you” altruism and the “you fucked with the wrong family” epithet for a villain.  You also get several talkie dysfunctional brothers’ dialogues.  Kudos to 2012 for one unexpected death similar to Samuel Jackson’s in “Deep Blue Sea”.


Cinematography goes to 2012 unless you get sick watching hand-held, quick cutting, video gamesque camerawork.  1984 is fairly tame in that respect.  It doesn’t even have the slo-mo the 1980s are noted for.  The score duel goes to 2012 also.  It is revved up and surprisingly does not have a slew of soundtrack worthy hits.  1984 is more cheesily backed.
As far as realism, why argue whether dog shit or cat poop smells worse?  With that said, no plot could top North f***ing Korea invading the U.S.  And you put clips of Obama to imply this could happen in the near future!  In for a penny…  Of course, as you might already know, the original villains were the Chinese until the makers were contacted by Walmart (I only made up the Walmart part).  Why couldn’t these high schoolers battle aliens or zombies?  Something that could actually happen.  By the way, how does a North Korean fighter jet participate in a battle in America?  Did it launch from one of those North Korean aircraft carriers?  1984 also featured enemy jets, by the way.

In conclusion, “Red Dawn” (1984) was worse than I expected and “Red Dawn” (2012) was better.  2012 has some good action of the modern frenetic variety.  The kind where you don’t have the foggiest idea who just got killed, but you’re pretty sure it should be everyone.  It improves upon the original in almost every way and does not suffer from the common "what the hell is the purpose of this remake" conundrum.  It’s just a shame it had to demonize those nice North Koreans.  I hope it doesn’t piss them off to where they might invade us.  The makers of the film will be held accountable if that happens.  It is not wise to poke a chihuahua.