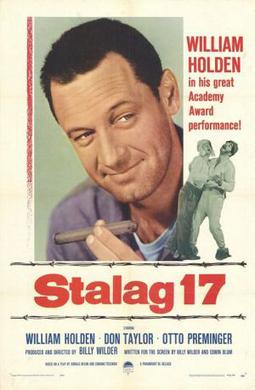 
“Stalag 17” is considered one of the great WWII POW films.  It is sometimes mentioned with “Bridge on the River Kwai” and “The Great Escape” as the triumvirate of top tier POW movies.  It was released in 1953.  It was based on a stage play by two veterans of Stalag 17B in Austria.  Director Billy Wilder reworked the play for the better and got pretty boy William Holden to play the lead even though Holden was unhappy with the cynicism and selfishness of the Sefton character.  Holden walked out on the play when he went to see it.  Wilder refused to soften the character and Holden went on to win the Oscar for Best Actor.  Wilder was nominated, as was Robert Strauss for Best Supporting Actor.  The movie was shot in California and the mud was real.  Wilder made the interesting decision to shoot the scenes in chronological order to where supposedly some of the main actors did not know who the stoolie was until the end (which sounds like bull shit to me).  The movie was a smash hit in America and Europe.
OPENING:
The movie opens with cynical narration by Cookie (Gil Stratton).  He asks why there aren’t any movies about POWs?  (I guess he had not seen “The Wooden Horse” – 1950)  This will be the tale of a spy in a barracks.  Two prisoners escape through a hole under the stove.  The tunnel is in the wash area.  Sefton bets they won’t make it.  What a jerk!  Machine gun fire proves him right and he wins some cigarettes.  It turns out that Sefton trades cigarettes with the Germans and has a stash of luxuries that he trades for more cigarettes.  Some of the cigarettes from the bet buy him an egg that he eats while the other PWs are feasting on potato soup.  Sefton is an anti-social, self-preservationist.  “It’s everyone for himself – dog eat dog”.  He mentions that attempting escape is foolish.


The film bounces between scenes of barracks life and scenes that develop the stoolie angle.  A guard named Schulz (Sig Ruman) rousts them for roll call.  (The makers sued “Hogan’s Heroes” for obvious reasons.)  Although the character is not a buffoon like in the TV show, he is there for comic relief.  The commandant is a Col. Von Scherbach (Otto Preminger).  He plays him as a smug Nazi bastard.  He is somewhere in between Von Luger (“The Great Escape”) and Saito (“The Bridge over the River Kwai”).
The film makes an effort to depict typical goings-on in a camp.  There is a mouse race (run by Sefton), peeping at Russian women in the adjoining camp, Christmas caroling, a dance with some of the men role-playing women, mail call, volley ball, listening to the clandestine radio, etc.  Woven into this is the main story line of “who is the stoolie?”  Sefton is the first to float the idea that someone is informing to the Germans which back-fires on him because everyone naturally assumes being a “black marketeer” is just a small leap to “collaborator”.  The audience learns early that the stoolie is passing messages to Schulz using the device of a loop in a lamp wire.

Two new prisoners arrive.  One, Dunbar (Don Taylor), is a rich boy who had a past with Sefton.  Sefton holds a grudge against him, but he is a true hero.  He tells the barracks of his destruction of a German munitions train on the way to incarceration.  Of course, word of this gets to the commandant who has him brought in for interrogation.  Sefton is blamed for this and beaten up.  While bed-ridden he figures out the secret of the lamp.  The barracks hatches a plan to rescue and hide Dunbar in the water tower.  Someone will have to get him out.  Price (Peter Graves), barracks security, offers to do the job.
CLOSING:
Sefton exposes Price as the stoolie.  He volunteers to get Dunbar out because he figures it will mean a big payout from the rich guy’s family.  He will need a distraction and what better than throwing Price into the compound with noise-makers tied to his legs.  As Sefton leaves he tells his mates “If I ever run into any of you bums on a street corner, let’s just pretend we’ve never met before.”  Then Wilder backs off a bit in the characterization by having Sefton salute and smile.  Price attracts the attention of the machine gun towers as Sefton and Dunbar use wire cutters to escape.  Graves gets a great death scene.  The movie closes with one of the funniest lines in war movie history.  When Shapiro (Harvey Lembeck) asks what made Sefton turn heroic,  Animal (Strauss) responds:  “Maybe he just wanted to steal our wire-cutters.  You ever think of that?”
RATINGS:


Overall                   B
WOULD CHICKS DIG IT?  Yes.  It is a deft blend of comedy and suspense.  The movie is definitely PG in violence and language.  Females might be disappointed in the measures Holden took to dehandsome himself.  (That didn’t stop him for entertaining lady friends in his trailer during the filming.)
ACCURACY:
The movie is fictional so this category does not apply.  The screenwriters may have incorporated some actual incidents in the plot, but the main plot points seem unlikely to have occurred in any camp.  Not that there weren’t some collaborators, but I am aware of no incident where the Germans managed to plant one of their own in a barracks.  I also never read about a PW blowing up a munitions train with a matchbox incendiary.
CRITIQUE:


Although it was not the first WWII prisoner of war film (sorry, Cookie), “Stalag 17” certainly laid a strong foundation for the subgenre.  It established some of the template.  Most of the action takes place in the barracks.  There is a lot of interaction between “hale fellows well met”.  Comic relief is thrown in.  The men try to make the best of their difficult conditions.  Those conditions (since it’s a German camp) are not intolerable to the point where  many men in the audience (and all the fourteen year old boys) would trade places with them for a week.  “Stalag 17” is not typical in its mystery subplot and the fact that it is not predominately about an escape attempt.  I can think of no other POW movie that includes humor, suspense, mystery, and a dislikable central character.


The main strength of the film is the acting.  Holden is great as possibly the first anti-hero in an American WWII movie, POW or otherwise.  Wilder brings out the best from an actor reluctant to play against his usual roles.  Holden may not have deserved the Oscar (he personally thought Burt Lancaster should have won for “From Here to Eternity”).  In fact, Wilder works wonders with the cast.  It was genius and gutsy to cast Otto Preminger as the commandant.  Preminger was legendary for treating actors like Von Scherbach treats the prisoners.  So I guess you could say Preminger was playing himself.  Graves is appropriately hissable as the villain, although it is obvious to everyone (except the actors supposedly) that he is the bad guy early on.  Strauss did not deserve an Oscar nod, but he and Lembeck do have some humorous moments.  Neville Brand (a WWII veteran) scores as the barracks tough guy.   Lefton memorably strikes a match on his cheek.  The only false note is from Jay Lawrence (Larry Storch’s brother) as Sgt. Bagradian.  Bargradian does impressions of people that could not have been funny in 1953 and certainly are not funny today.
The movie is famous (and has been criticized) for its broad humor.  I have to admit much of it is silly, but there are some truly funny lines.  Hell, just the way Marko the Mailman says “At ease, at ease” is LOL.  When Trzcinski  (one of the screenwriters, playing himself) receives a letter from his wife he says “ I believe it. My wife says, ‘Darling, you won't believe it, but I found the most adorable baby on our doorstep and I've decided to keep it for our very own. Now you won't believe it, but it's got exactly my eyes and nose.’ Why does she keep saying I won't believe it? I believe it! I believe it.”   Schulz gets some good ones like “The barracks should be schpic, and also schpan!”  Even Preminger gets a moment when he puts on his boots so Von Scherbach can click his heels during a phone call to a superior.  It’s the kind of movie that leaves you smiling, but guiltily because you know the real thing was not as funny.  However, American soldiers do tend to maintain their senses of humor even in tough situations.
The movie is technically sound.  Wilder’s cinematography gives the movie a dynamism that overcomes the static nature of the barracks.  Many of the shots have depth to them.  The set is nicely authentic looking.  The barracks has nice touches like pin-ups, laundry hanging, and graffiti carved into the bunks.  The score is used sparingly and not to force a mood on the audience.
CONCLUSION:


“Stalag 17” is an entertaining movie that holds up fairly well although I doubt my students would be very impressed.  The top-notch acting and the blending of humor with the seriousness of a prison camp with a stoolie in it makes it different.  Possibly this would not have worked without Wilder at the helm, but it does work.  With that said, it is very overrated at #18 on the list of 100 Greatest War Movies.  I would have it in the top 100, but not in the top 50.  It is inconceivable that it could be rated 26 spots higher than “The Great Escape”.  That’s insane.
Posted by War Movie Buff at 10:21 PM