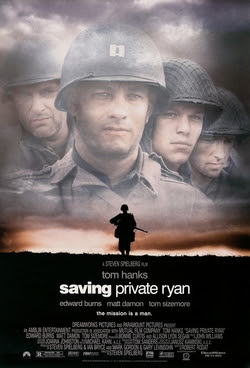 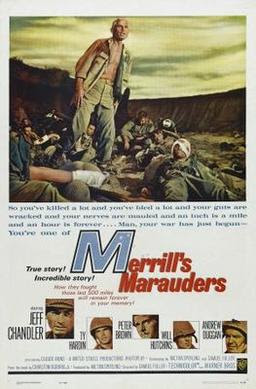 The acting in “Saving Private Ryan” is very good. Tom Hanks was nominated for Best Actor (he unbelievably lost to Roberto Benigni; the second biggest head-scratcher of the 1999 Academy Awards) and it is a nuanced portrayal of a reluctant warrior. The supporting cast is strong and there are no weak performances. Even Vin Diesel (thankfully not in the film long enough to do damage) ups his game and dies well. Speaking of which, SPR has the highest quality of death scenes that I have seen in a war movie.

“Guadalcanal Diary” is a small unit movie with the usual suspects from 1940s war movies. William Bendix (“Taxi”) provides the comic relief, Anthony Quinn (“Soose”) is the ethnic character, LLoyd Nolan (Sgt. Malone) is the tough sergeant, Preston Foster (Father Donnelly) is the “father” figure. Most importantly, Richard F’in Jaeckel (“Chicken”) makes his acting debut. The acting is average. No one stands out, but no one embarrasses themselves either. They all make their country proud.

SPR was lauded for creating a new style war movie when it came out and many of the masses swallowed this analysis. In reality, it merely puts a different spin on the classic war movie template. It is after all a hero leading a small unit on a mission. The hero is forced to assume command. The unit is heterogeneous with the ethnic dude (the Jew Mellish), the gruff sergeant (Horvath), the griper (Reiben), the humane medic (Wade), the religious bumpkin (sniper Jackson), and the newbie (Upham). Possibly as a joke (I hope) Spielberg even has Reiben‘s jacket labeled “Brooklyn”. That is either hilarious or pathetic. There is a conflict within the group between Reiben and Horvath that is resolved by external pressure. There is a ritual recalling the peaceful past (listening to the song on the gramophone). The movie clearly alternates from combat to rest/exposition. The movie does lack a redemption character.

It is a little unfair to criticize GD for clichés when they were fresh for back then. It some ways it helped establish the template. However, it must be pointed out that many of the plot elements and characters had already been established by WWI movies like “All Quiet” and “The Lost Patrol”. It starts with a thank you to the USMC. There is a heterogeneous group (see above). There is an observer (the war correspondent, although he is underused). There is a mascot (a little dog). Episodes alternate between opposites (action to rest). Rituals like preparing weapons and mail call occur. They leave the battle as a new unit comes in. However, there is no reluctant leader or redemption character so it could have been worse.

SPR combines two standard war movie plot tropes. The first half is the patrol on a mission and the second half is a last stand. Both segments incorporate the “who will survive?” angle. Although not groundbreaking as far as those tried and true elements, the way the screenwriter handles them is quite good. The objective is certainly outside the box- a mission to rescue one soldier. The plot is very manipulative of the audience and takes advantage the non-war movie veterans who would find much of it fresh. It pulls all the emotional strings reaching a crescendo at the end. It throws in a German character to link key scenes and contive the ending. As ridiculously implausible as this arc is, it is not embarrassing like in “The Big Red One”. The flow from action to rest is very smooth. It is a real roller coaster ride, in a good way.

GD is based on the famous non-fiction book by Richard Tregaski. This is part of the problem. The book is boring and the movie is too loyal to it. It flows from non-action to action, but it is not a roller coaster ride because the combat is brief and unsatisfying. The plot is more about character development, but you can have more balance between that and action than this film provides.

Although incorrectly credited with modernizing the war movie plot, SPR can be credited with taking war movie combat to a new level of realism. It is popular these days to downplay the greatness of the movie, but the opening scene is still the most amazing combat scene ever filmed and has not been topped after fifteen years and many challengers. That one scene will be remembered as a seminal moment in war movie history. It’s easy to forget that many WWII veterans vetted that scene as the closest cinema has come to the real thing. I also would like to remind everyone that Dale Dye was the technical advisor. What sometimes is overlooked is that the movie also has a great combat set piece at the end. The choreography of this intense last stand is laudable. The violence is as graphic as the opening plus the deaths are more emotional.

The Battle of Guadalcanal was one of the most intense battles of the Pacific. You certainly would not get that impression from this movie. The unit lands on the first day (which granted was a day without much action in actuality) and they stay until Nov. 10. They are stationed at the air field which was under consistent attack throughout the period they were on the island. That was more than three months. In the actual campaign there were several noteworthy battles and yet the movie does little to recreate them. In fact, at one point the narrator refers to “weeks of constant fighting” which is news to the audience. Granted, the movie is not about combat. However, what little combat there is is underwhelming to say the least. There is the mission to capture a Japanese unit that results in an ambush with only one survivor and two hot pursuit type attacks that are brief and totally old school. It is asking too much for a 1943 movie to replicate the combat of SPR, but it is not asking too much for it to emulate “Wake Island” or “Bataan”.

As with all #1 vs. #16 match-ups, this was a mismatch. You can say what you want about the sappiness of “Saving Private Ryan”, but its stronger elements overwhelmed “Guadalcanal Diary”. GD is a nice little movie and should be thankful just for making the tournament. In this case, David never had a chance against Goliath.

P.S. It's a lucky thing for SPR that the match did not end in a tie because I would have to give the edge to GD for its amazing poster. OMG I shirtless Marine hoisting a squirming "squint-eyed monkey" over his head! Priceless.