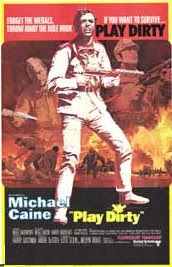 In 1969, a movie entitled “Play Dirty” attempted to outdirty the “Dirty Dozen”.  It makes no bones about its goal – hell, it has “dirty” in the title!  The movie goes beyond its predecessor in its antiwar theme and seems to try to rectify the sheen of adventure that pervades TDD.  The film is set in North Africa in WWII.  It is firmly in the suicide mission subgenre.  Picking up on the “Dirty Dozen” twist of comprising the unit of criminals, “Play Dirty” creates a multi-national unit of specialists who happen to be slimeballs.


The mission is to go 400 miles behind enemy lines  to attack one of Rommel’s fuel depots.  A British petroleum engineer named Douglas (Michael Caine) is dragooned by a British Col. Masters (Nigel Green) into leading the mission.  His reluctant second is a convicted criminal named Leech (Nigel Davenport).  Naturally they do not get along as Douglas believes there are rules in warfare.  How adorable!  The dirty half dozen consists of assorted low-lives with no redeeming qualities (unlike some of the Dirty Dozen) including two half-wit Arab homosexuals.  Kudos (?) for going way outside the box for a 1969 war movie.  This being a screw the Old School movie, the mission is not as advertised.  Higher command is using the squad as a diversion for the real attack force which will follow in its wake.


Disguised as Italians, our motley crew heads into the desert.  There is an interesting set piece where they have to get their vehicles up a cliff by hoisting them.  As they finish this task, they have a grandstand view of the slaughter of the “real heroes” in the valley below.  The Germans eliminate this unit with extreme prejudice.  Leech prevents Douglas from intervening.  Douglas:  “You play dirty.”  Leech:  “I play safe.”  One of these guys is going to move over to the other way of thinking by the end of the movie.  Guess which.  (Hint:  this movie was made in the late 1960s.)


There are no problems reaching the supply depot.  Just kidding.  One of the Arabs is wounded by a mine.  They ambush an ambulance.  The German nurse puts up a good fight until Leech knocks her out.  “Don’t you know how to treat a lady?”  Feminists will love this movie.  Later, three of the men attempt to rape the nurse.  The wounded guy shoots one of them in the ass.  Chivalry is not dead.


They reach the objective and infiltrate through a mine field during a sand storm.  Get ready for explosions.  Crap, it’s a fake site.  What an unfulfilling movie.  But wait, Douglas insists they move on to destroy a fuel dump.  Pheww!  Let’s go get some unit members killed so I can win my bet on how many survive.


The brass is not happy with this initiative.  Monty will need that fuel.  They inform the Germans that our intrepid scumbags are coming.  The group (disguised as German soldiers) walk into a trap but still manage to set off numerous explosions.  Leech sacrifices the others so he and Douglas can survive.  They are too important to the war effort.  Well, at least two survived the mission.  Technically.  When you make your bets on how many will survive in this movie make sure you specify whether you are referring to surviving the mission or surviving to the end of the movie.

“Play Dirty” is loosely based on history.  Masters could be based on Vladimir “Popski” Peniakoff.  Popski was an adventurer who was given command of a special forces group which became known as Popski’s Private Army.  Using jeeps it would go behind enemy lines to raid Afrika Korps fuel dumps in advance of Montgomery’s 8th Army after the Battle of El Alamein.  The unit had a reputation for cautious daring and suffered low casualties.


The “Dirty Dozen” was a necessary attempt to desanitize the suicide mission subgenre by populating the unit with criminal-types.  “Play Dirty” pushes the envelope by making the anti-heroes evil and the mission unnecessary.  The brass is also pushed out to cynical manipulators.  They go from being jerks to assholes.  More importantly, in TDD you could say that as bad as the dozen were, at least the Nazis they killed were worse.  That is not the case in this movie, Leech and crew are more evil than the Germans.  Trust me, there is no rooting for Jefferson moment in this film.


The plot takes a while to get to any action, but the action provided is fairly intense and suspenseful.  The violence is not particularly graphic which puts the movie in the transition period between Old School and VioLingo.  There is little character development beyond Douglas and Leech.  We don’t care about any of the other members other than not caring if they get killed.  The acting is substandard.  The cast is the polar opposite of TDD.  Only Caine is noteworthy.  The two leads underplay their roles.  The enemy is faceless.


In conclusion, “Play Dirty” is a shameless rip-off of “The Dirty Dozen”, but unfortunately it is not a guilty pleasure.  The film has its fans and some unbelievably find it superior to TDD.  If you love subversion and hate the military , you might like it.  If you are a war movie lover, it is interesting to see how far the pendulum swung from “The Guns of Navarone”.  It has to be viewed as a misfire creatively and financially.  It strikes me as almost a stunt.  It certainly would have worked better as a parody.  Which reminds me, there is virtually no humor in the movie (unless you find women being cold-cocked and Arab homosexuality to be funny).  Even during the Vietnam War, a film with no positive characters and such a cynical attitude seems too negative.  Getting back to my pendulum metaphor, look at “Inglorious Basterds”.  Even Quentin Tarantino did not go as far as “Play Dirty”.
grade =  D
Posted by War Movie Buff at 10:14 PM