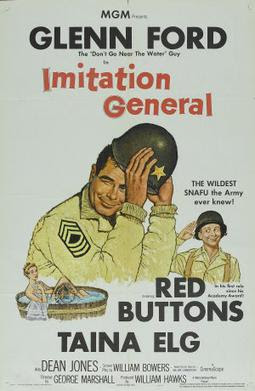 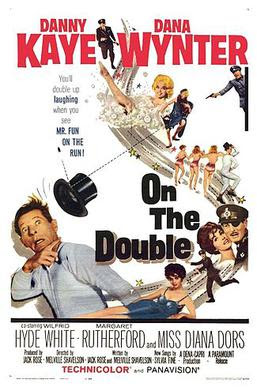 The dueling movies are two WWII comedies.  Both involve cases of mistaken identity.  “Imitation General” stars Glenn Ford as Sgt. Murphy.  He and Cpl. Derby (Red Buttons) are with a Gen. Lane at an isolated French farmhouse owned by a feisty French girl named Simone (Taina Elg).  When the general gets killed, Murph decides to masquerade as him to keep morale up.  The complication (surprise, there is one!) is that Murph’s bitter enemy is now on the scene.  Pvt. Hutchmeyer (Tige Andrews) holds a grudge because Murph had him busted.  Comedy ensues with comic relief supplied by Buttons, of course.  The movie tries to be a dramedy by throwing in some action.  Murph uses a jeep rigged up as a tank to defend a bridge against a German attack. There is actually a neat little tank battle (with the same model tanks on both sides).  Murph and Derby take out two tanks by jumping on them, covering the sights and throwing in grenades, like any general would do!  All this while avoiding Hutchmeyer.
“On the Double” is a Danny Kaye movie which tells you a lot about what is going to happen in it.  Naturally, he will play more than one role.  Kaye is the hypochondriac, coward Ernie Williams who because of his ability to mimic anyone is tabbed for Operation Dead Pigeon.  He will double for Col. MacKenzie-Smith who is a key person in Operation Overlord.  The Germans are out to assassinate the colonel, but Ernie is not told this is a suicide mission. This movie has a complication as well.  The colonels estranged wife Lady Margaret (Dana Wynter) shows up and somehow knows this buffoon is not her suave husband.   They fall in love and the real colonel’s plane gets shot down so they live happily ever after.  Well, not until lunacy ensues.  Assassination attempts allow Kaye to do his usual shtick which includes singing a song and lots of physical comedy.  He gets kidnapped and brought to Berlin.  Did I mention this is not a true story?  After talking jibberish under torture (three minutes of it), he escapes using a variety of disguises, including Hitler.
This is more of a pillow fight than a duel.  “Imitation General” has some good acting.  Ford and Buttons are their usual reliable selves.  They do their best with a lame script.  Even for a comedy, the plot is rife with implausibilities.  The main problem is it is not that funny.  “On the Double” is a typical Danny Kaye vehicle, but not one of his better ones.  He gives it his all, but much of it is forced.  There is even a food fight!  The plot sets up future bits in a ham-handed way.  For instance, the colonel wears a patch over his left eye, but Ernie is poorly sighted in his right so they get him a contact.  Do you think there will be a moment when the contact falls out and Ernie will be comically blinded?  Obviously, OTD makes IG look like a documentary.  It is far from subtle, but some of the jokes score.  It’s more quantity than quality, however.
Which film is better?  That’s a tough call.  If you want a little action, choose “Imitation General”.  If you just want humor, watch “On the Double”.  Just don’t expect a lot of laughs from either.  They are both forgettable and mark the end of an era that was replaced by the cynical / satirical school of movies like “Dr. Strangelove”, “Catch-22”, and “MASH”.   Progress is good.
P.S. Check out those posters.  Apparently depictions of women bathing really drew audiences in the lat 50s/early 60s.