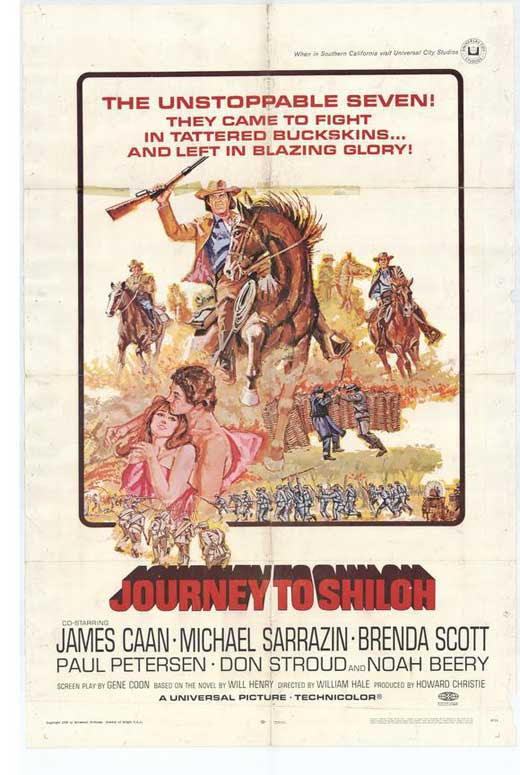 “Journey to Shiloh” is a small unit movie set in the American Civil War.  It may be about the war, but it looks a lot like a Western.  A crappy Western.  You know you are in trouble early when a cheesy ballad introduces each of the seven young Texans who are going to trek to Rchmond to enlist in the Confederate army.  Gee, they sure hope the fun isn’t over before they get there!  It is one of the stupidest openings in any movie I have seen.  A saloon fight one minute in confirms we are not going to be seeing anything special.  It is obvious this will be one of those “who will survive?” films.  I guessed three.
The cast is filled with faces that will become familiar.  It’s nice to see they will all improve and hopefully they were able to erase this movie from their memories and their resumes.  James Caan plays the leader of the septet.  He is a hot head and a quick draw named Buck.  The boys have a series of encounters on their journey.  They attend a dance where they meet a slave family.  “We just folks, suh.  Only difference is we born to Col. Claiborne.”  Hopes we Southerners whup dem Yankees.  At least Buck seems uncomfortable with this dialogue.  They get kicked out of the dance for being “savages”.
When J.C. deserts, Buck insists on going get him because he took an oath.  He finds him in a crooked card game that results in the first of the seven to go.  Buck does nothing about the killing of his friend.  Next they run into an escaped slave and turn him over to the local sheriff.  Later they see him lynched outside town.  Hey, it’s the South, what are you going to do?   Keep going to fight for it.
Our heroes get tricked into enlisting in the Pensacola Greys led by the mean and strict Braxton Bragg (the only accurate thing in the movie).  They are off to Shiloh, but arrive one less as Lil Bit (Jan Michael Vincent) dies from sickness, but with his perfect hair unmussed.  Five left.  The Battle of Shiloh has been better reenacted with Lego figures than in this movie.  The tactics are ridiculous and the battle is flamingly inaccurate.  Todo (Don Stroud) dies of a chest wound.  Willie Bell (Harrison Ford!) and Eubie (Michael Burns) are killed off screen.  No great death scenes for them.  Now we’re two.
Buck wakes up with his arm amputated.  Meanwhile, Miller (Michael Sarrazin) is holed up in a barn mortally wounded and charged with desertion.  Buck arrives so Miller can talk himself to death.  Then along comes Gen. Bragg who is impressed with Buck’s story of the Concho County Comanches and does not want them to go 0 for 7 so he let’s Buck go.  (Scratch that comment about Bragg being accurately portrayed.)  OMG another cheesy ballad reprises their deaths!
This is a terrible movie.  It is one of the worst war movies I have seen since I started this blog.  What is it about the Civil War that there are so few quality movies?  “Journey to Shiloh” looks like a made for TV movie – a very bad made for TV movie.  James Caan is good, but the rest of the cast are bad.  The film is corny, trite, and cheesy. Not to beat a dead horse, but the Springfield Trapdoor models used in the film were not available until 1879.  Also, none of the actors have facial hair.  Good research, Mr. Director.