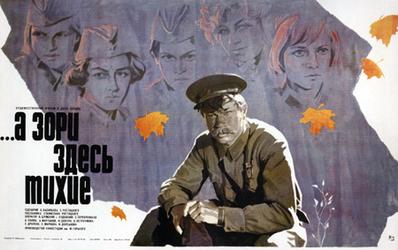 “The Dawns Here Are Quiet” is a Soviet film released in 1972.  It was nominated for the Best Foreign Language Film Oscar.  It is set in a village near Finland in 1942.  Sergeant Vaskov (Andrei Martynov) is in command of a unit that is noted for drunkenness and fraternizing with the village females.  His superior solves the problem by taking away his men and sending an anti-aircraft unit to replace them.  An all-female ack-ack unit!  The girls laugh at Vaskov’s insistence on following regulations.  The village becomes like a girls summer camp.  They sleep together in a barracks.  They sing songs.  They dance with each other.  They take a steam bath together (with nudity, guys!).  But when there is an air raid, they kick ass.  They efficiently use their KPV multi-barreled heavy machine gun and shoot down a bomber.  Rita (Irina Shevchuk) coldly stitches a parachutist.
Lisa (Yelena Drapenko) spots two German paratroopers in the woods and Vaskov decides to take her and four others to track them down before they can do whatever sabotage they are tasked for.  They cross a swamp and set up a strong defensive position to ambush the pair.  Unfortunately, the pair turns out to be eight pairs.  Vaskov sends Lisa  back through the swamp for reinforcements. He and the remaining four will attempt to delay the Germans.  The movie now shifts to “who will survive?” mode.


I went into this movie with very low expectations.  I had never heard of this movie as it had not been mentioned as a noteworthy Soviet film like “Come and See” and “Ballad of a Soldier”.  The opening scenes seemed to confirm this.  Vaskov is a buffoon and the girls are giggly.  I was wondering if it was a comedy and whether it was truly a war movie.  Not that the first part isn’t entertaining.  The ladies are fetching and some are hot.  How often do you get a nude frolic in a steam bath in a war movie?  (A Soviet war movie at that.)  Actually, only a war movie about the Red Army in WWII could realistically portray female soldiers like this movie.


The air raid is a seriously good combat scene, but appeared to be an aberration in an otherwise fluffy movie.  Not that the movie was standard up to this point.  Early on a series of striking flashbacks kicks in.  The movie is crisply black and white, but the flashbacks are in color and slightly surreal.  They are used to give back-stories to the main characters.  For instance, Zhenya (Olga Ostroumova) had an affair with a married officer.  By the end of the film, the five women who go on the mission have had their characters developed well.  It is a heterogeneous group.  There is the slut (Zhenya), the revenge-minded widow (Rita), the mousy (Lisa), the poetry lover (Galya), and the timid (Sonia).  More important is the character evolution of Vaskov.  He goes from a buffoon to a crafty leader.  He also shows commendable empathy for his charges in a big brotherly way.  And he turns out to be quite a warrior, as do the girls.  They participate in fire-fights using their Mosin Nagant rifles and captured German MP40s.


Director Rostotsky served in the army in WWII and went on to become a decorated film-maker after the war.  The movie is technically proficient.  The decision to show the flashbacks in a different style added pizazz to the movie.  The cinematography in the forest scenes is remarkable.  The biggest accolade I can bestow is that you do not realize without reflection how difficult it must have been to smoothly film the running about in the forest.  There is some POV and even some hand-held.  The lensing contributes to the fog of war aspect of forest fighting.  Rostotsky’s themes are apparent.  Female soldiers could be feminine and yet serve the Motherland effectively.  The movie is an homage to them.  They deserved it.
“The Dawns Here Are Quiet” is a must-see for anyone interested in Soviet war movies.  It belongs in the discussion about which is the best of this subgenre.  Having seen several of the most lauded films, I can say it is easily in the top 5. It could even make my 100 Best War Movies list.
GRADE =  A
SOVIET WAR FILMS
1.  The Dawns Here Are Quiet
2. The Cranes Are Flying
3. Ivan's Childhood
4.  Alexander Nevsky
5.  Come and See
6.  Battleship Potemkin
Posted by War Movie Buff at 12:02 PM