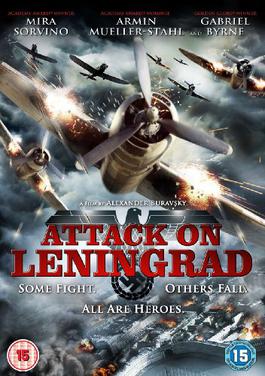 Leningrad underwent a three year siege by the German army in WWII.  The citizens underwent terrible hardships during the siege.  But worse is what happened to a blond female journalist, apparently.  The movie was directed and written by Aleksandr Buravskiy.  It was a Russian/British production.  It is not based on a true story.

The movie begins in September, 1941 which is when the siege began.  A battle scene has raw recruits arriving at the front line trenches in the middle of a battle.  They charge into no man’s land and a melee ensues.  The set is realistic, the wounds are graphic, and the action is pretty intense.  Hitler complains to Gen. Von Loeb that Leningrad is not falling quick enough.  But this is not going to be a movie about command decisions or combat between the armies.  It is going to be about a news reporter stuck in Leningrad.

Katie Davis (Mila Sorvino) gets left behind when her flight takes the other journalists out of the danger zone.  She gets caught in a CGI bombing raid.  The effects are poor and it is a silly scene.  This is our first inkling that we are watching another Miro Sorvino direct-to-video effort.  What happened to this woman’s career?
Katie is saved by a spunky Soviet policewoman named Nina (Olga Sutulova).  Nina puts up Katie with her family which includes her chess prodigy brother.  Katie and Nina bond in an excruciating scene.  The dialogue is horrible and the acting is atrocious.  A subplot develops when Nina finds out that Katie is the daughter of a traitorous Russian general.  Dilemma time.  Meanwhile, for balance, Von Loeb’s nephew is refusing to fly bombing raids against civilians.  He persists even after his uncle points out that the CGI fighters are not actually carrying the bombs they drop (like every fighter that drops bombs in war movies).  Nina helps open up the lake road that provides a supply line for the Soviets.  She might be able to get Nina out that way.  Unless this is a movie filled with stupidity.

“Attack on Leningrad” is a terrible movie.  You would think you could set a drama in the siege and create some human interest and entertainment.  Buravskiy is not capable of doing that.  There is some taste of how hard the situation was for the civilians, but not enough.  Instead, we are supposed to be concerned for a journalist.  It doesn’t help that the journalist is played by recent Sorvino.  Gabriel Byrne does not cover himself in glory either.  The movie is just flat-out embarrassing.  For that reason, it is depressing, but not because of what the characters go through.  It is depressing that I sat through it.  It’s not often that I beg for a war movie to end.  This was one of those cases.

P.S.  Check out the ridiculous poster!  Would you pay money to see that movie?