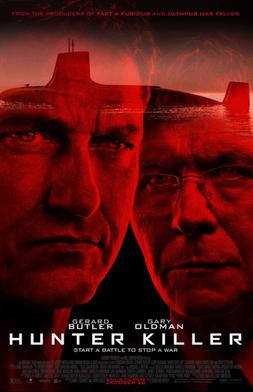 I had been waiting a while to see “Hunter Killer” because of an article I read a while back.  That doesn’t mean I couldn’t wait to see it.  I knew it held a high likelihood of being disappointing.  I am especially leery about submarine movies.  Hollywood loves them to the point where they have their own subgenre within the war movie genre and the cramped setting lends itself to drama. Unfortunately, most are just not good and clichés abound.  It is very hard to be in a submarine movie these days.  Just look at the last major sub movie – U-571.  Instead of breaking new ground, it decided to go retro and include virtually every sub cliché known to man.  Where does “Hunter Killer” fall in the subgenre?

“Hunter Killer” was directed by the unknown Donovan Marsh.  It is based on the novel Firing Point by Don Keith and George Wallace.   Marsh and Gerard Butler went aboard the USS Houston for three days to do research.  The interiors of the submarine were built based on plans approved by the US Navy.  The underwater scenes were done in a water tank using a model.

The movie is a combination of “Hunt for Red October”, SEAL movies, and a typical sub movie.  If you are going to make a sub movie in 2018, it has to cross subgenres, apparently.  Actually, it is comfortable in the action genre, too.  It does have a two-word title, after all.  It opens with an international incident in the chilly waters of the Barents Sea.  An American sub and a Russian sub are sunk under suspicious circumstances.  Since the U.S. government is already concerned about the militaristic new Russian President, it is assumed this might be the start of WWIII.  The hunter-killer submarine USS Arkansas is sent to investigate.  It has a new commander named Glass (Butler) who has risen from the ranks.  He has to deal with a veteran crew.  Dramatic, right?  A second arc has a National Security adviser (Linda Cordellini) working a theory that the situation might be part of a Russian coup to provoke a war.  She convinces the President to launch a third arc by sending a SEAL team into Russia to get good old eyes-on information.  The four-man team confirms that a rogue Russian general has captured the Russian President and is going to start a war.  The SEAL mission morphs into a rescue mission because that will get gunfire into a sub movie.  Meanwhile, Glass is having to navigate the usual sub movie waters that include command dysfunction with his exec, a sub duel, a sub rescue, mine evasion, and depth charging.

There is nothing special about “Hunter Killer”.  It is what you would expect it to be.  It is what I call a kitchen sink movie. As in, the director throws everything in, including the kitchen sink, to awe the fourteen year-old boys in the audience.   Hell, he’s not content with making a submarine movie.  He also wants to make a special forces movie.  The scene where the SEALs rescue the Russian President is straight out of every special forces movie (and TV show).  The submarine scenes have all been done before, too.  One positive thing is the sub does not play host to the myriad of submarine clichés.  It does have the standard command dysfunction element.  There is a whiff of “Crimson Tide”, but in this case it’s the executive officer who is by the book.  Glass plays the Capt. Kirkish commander who goes with his gut instead of his orders.  Of course, his gut leads to success and success usually negates a court-martial.  (We’ll never know since I doubt there will be a sequel.)  Speaking of stereotypes, Jayne (Cordellini) has to butt heads with a war-mongering admiral (Gary Oldman).  By the way, why is Oldman wasting his time in this movie?  He certainly classes up the cast, but seriously…  I will say he doesn’t bring his A game, so he doesn’t overshadow the average acting going on around him.

Cliches and stereotypes do not sink “Hunter Killer”.  It is also not torpedoed by poor effects.  That doesn’t mean they are cutting edge.  It just means they keep the underwater stuff dark enough to keep your head from shaking.  Well, I did smirk a bit as the sub maneuvered like a mouse in a maze.  But hell, it is a cinematic sub so they can avoid anything and go anywhere.  (If the exec had ever seen a sub movie, he would have been a lot less stressed.)  The big problem (if you demand your movies respect your intelligence) is that it gets progressively more ridiculous as it goes on.  It does not even bother to try to flesh out the scenario.  It just plunges from one action sequence to the next.  Glass announces their mission to find the USS Tampa Bay and suddenly, they are there.  Why bother with exposition, considering the intended audience?  By the end of the movie, I wasn’t shaking my head, I was face-palming.  Stick around for the scene where Glass’ gut has to depend on a Russian destroyer to save the Arkansas.  Speaking of which, the movie has some post-Cold War Russian villains (straight out of central casting), but it also has some heroic Russians.

Do I recommend it?  Not for a regular movie-goer.  And not if you are a discerning war movie fan.  It is entertaining in an unchallenging way and pushes the usual buttons of an action movie (with a pulse-pounding soundtrack).  If you don’t go see it (and if you do), it will be forgetten.  Bring on “Overlord”.
GRADE  =  C-