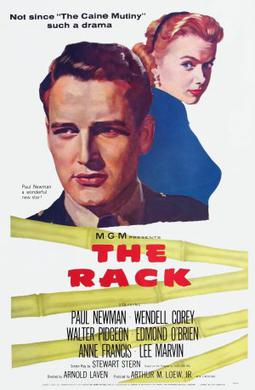 “The Rack” is a Korean War courtroom drama that deals with the collaboration of American prisoners of war.  It was directed by Arnold Laven who was noted more for directing TV programs.  In fact, the movie was based on a teleplay by Rod Serling.  The teleplay appeared on a show called “The U.S. Steel Hour”.  Oh, the Fifties.  Knowing it came from Serling tells you it is not going to be predictable.  The movie was meant to be MGM’s answer to “The Caine Mutiny”.  Glenn Ford was offered the lead, but turned it down because he thought the main character chewed the scenery too much.  Instead it went to a potential star – Paul Newman.  Good prediction as the movie’s release was delayed until after “Somebody Likes Me” came out and his career took off.

The movie opens at the close of the Korean War.  Capt. Edward Hall (Newman) is greeted at the air field by his father (Walter Pidgeon) and his sister-in-law Aggie (Anne Francis).  His father is a retired colonel who has already lost a son, Aggie’s husband, in the war.  The reunion is awkward.  Edward, Jr. is reluctant to go home from the hospital and is obviously holding something back.  A clue is when a fellow POW slips a noose labeled “traitor” around his neck.  It turns out that Edward is one of forty POWs that are up on charges for misconduct.  What follows is a standard court-martial, but with Rod Serling twists.  The trial is intercut with Edward’s uncomfortable relationship with his father, who at one point wishes that his son had died.
“The Rack” is interesting.  The set-up is similar to “Time Limit”, but the trial does a better job outlining the case for and against leniency for collaboration.  There are three fellow prisoners who offer evidence that Hall gave propaganda lectures, wrote leaflets encouraging soldiers to surrender, and ratted out an escape attempt.  One of them is a Capt. Miller (Lee Marvin, perfectly cast) who describes himself as a “reactionary” and Hall as a “progressive”.  In other words, real American versus communist sympathizer.  The rest of the cast is equally effective in the main roles.  Anne Francis is realistically torn as the sister-in-law who has to act happy that Edward is back when she wonders why he survived when her hero husband died.  The prosecuting Maj. Moulton (Wendell Corey) and defending Lt. Col. Wasnick (Edmund O’Brien) are well-played.  Moulton is not dastardly.  He is not Saint-Auban from “Paths of Glory”.  Walter Pidgeon is the weak link, but it is due to his character being weak.  Col. Hall is surprisingly clueless about his son’s situation and then goes through a typical cinematic reconciliation.  Newman has a star turn and although his Rocky Graziano biopic launched his stardom, this movie was the first evidence that he was special.

The movie is essentially a play, but the cinematography does have some nice deep focus.  The real strength is the dialogue.  Edward counters his father’s disappointment with “my mother wasn’t in the Army, so I’m a half-breed”.  He explains his collaboration by saying that he “sold [his] soul for a blanket that smelled like urine and three hours of sleep.”  The script is thought-provoking.  You wonder what you would have done under the circumstances.  You will also wonder if he is guilty and whether he will be found guilty.  The movie is not predictable.

If you know little about the Korean War prisoner experience, “The Rack” is a good primer.  The movie takes its instructive potential seriously.  It covers communist tactics used to turn prisoners and some of the things the collaborators did.  Hall is a poster boy for them.  It also covers why some soldiers collaborated and whether some actions were excusable. If you didn’t already know it, the Korean War was one fucked up war.

HISTORICAL ACCURACY:  “The Rack” does not claim to be based on a true story.  The scenario is realistic, however.  There were about 7,500 Americans captured in the war.  2,500 did not survive captivity due to lack of food, lack of medical care, freezing conditions, and mistreatment. Shockingly, 21 Americans refused to be repatriated.  The American public learned a new term – brainwashing.  This political indoctrination has been exaggerated by movies like “The Manchurian Candidate”, but collaboration was a problem.  Hall did not collaborate because of brain-washing.  He gave propaganda lectures, wrote leaflets, and ratted out comrades because of tactics like sleep deprivation and solitary confinement.  These types of tactics, along with physical brutality, were effective because some of the Americans were susceptible to them.  The movie has the defense summarize a communist communique:  1.  many POWs reveal weak loyalties to families, communities, and the Army  2.  when left alone they tend to feel deserted and underestimate their ability to survive because they underestimate themselves  3.  even college graduates know little about American History, democracy, and communism.  Hall was part of an “uninspired, uninformed, unprepared” generation.  But did that excuse collaboration?  The Pentagon unofficially acknowledged the problem by establishing a committee to come up with a set of rules for conduct as a prisoner.  Pres. Eisenhower issued Executive Order 10631 creating the “Code of U.S. Fighting Force” in 1955.  It responded to situations like what the fictional Hal went through by proclaiming that you must avoid collaborating until “all reasonable means of resistance are exhausted and … certain death is the only alternative.”  You must “resist by all means available.”  As the prosecution asks of Hall:  “did you ever reach your horizon of unendurable anguish?”  Because of the code and better training, collaboration was less of a problem in Vietnam.  And because of the fictional Hall and the large number of real prisoners who faced trials when they returned, the military and the public became more understanding.  John McCain would have been in Hall’s shoes if he had been a captive in the Korean War.  Watch “Faith of My Fathers.”