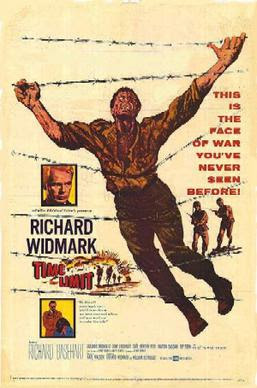 “Time Limit” was released in 1957 and is one of the few decent movies about the Korean War. It falls in the prisoner of war genre. It is also an example of a court room drama similar to “A Few Good Men”. It was the directorial debut of Karl Malden and was the only film he directed. It is based on a play and much of it looks stage-bound as much of the action takes place in a JAG office. It makes a good companion to “The Manchurian Candidate” as both are about Korean War brainwashing.


The movie opens in a North Korean prison camp. A prisoner is shot trying to climb the fence ala “The Great Escape”. From there we cut to the JAG office where Col. Edwards (Richard Widmark) is prepping for the Cargill case. Cargill (Richard Basehart) is accused of signing a germ warfare confession and making anti-American radio broadcasts. It seems to be an open and shut case as Cargill does not dispute the facts and refuses to testify. A general whose son died in the camp insists on swift justice.

Edwards does some investigating and discovers that the truth is more complicated. Several survivors recite identical stories about deaths of comrades (a device used in “The Manchurian Candidate”). As to the general’s son, his death was not exactly heroic. In fact, he is strangled by a fellow prisoner because he ratted out another prisoner who was planning an escape. The Communist commander (played by who else but Khigh Dhiegh) gets Cargill to cooperate by promising not to harm any more of the prisoners.

When the general is told the shocking news about his traitorous son, we have an interesting exchange between the general and Cargill. Cargill argues that there is a “time limit” to how much a man can be expected to take. “You can’t ask a man to be a hero forever, there has to be a time limit.” Interestingly, the general’s rebuttal is also persuasive, leaving the viewer to ponder the issue. The general argues that there is a sound reason for the military code section that applies to cooperation with the enemy. Cargill was looking out for 16 men, but think of the thousands that were adversely affected by his confession to a crime that the U.S. Air Force did not commit and it was used for very adverse propaganda against the U.S.

Although a work of fiction, “Time Limit” does touch on some history. The Communists did coerce American airmen into admitting to fictitious germ warfare. There is a “Code of the U.S. Fighting Force” (known as “the Code”), but it was not issued by Pres. Eisenhower until after the Korean War and obviously in response to it. The code insists POWs resist to the best of their ability, try to escape and aid others in their attempts, and not accept favors from their captors. They should also avoid answering questions “to the best of their abilities”.

This gem should not be forgotten. The acting is outstanding and the plot deals with moral dilemmas that need to be confronted not just by the military, but also the public. The ambiguous ending lends strength to the film. It leaves you thinking.
Posted by War Movie Buff at 1:07 PM