CONSENSUS 76. Oh! What a Lovely War 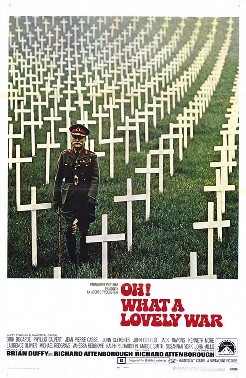 SYNOPSIS:  “Oh! What a Lovely War” is a unique war musical.  Based on a play, it was directed with flair by Richard Attenborough.  The movie intercuts between the five Smith brothers who are enthusiastic volunteers, but soon to be cannon fodder, and the generals and leader who put them in the trenches.  The script mixes a large number of period songs and actual quotes from the historical figures who were to blame for Great War being so horrendous.  The cast is filled with familiar British stars.

BACK-STORY:  “Oh! What a Lovely War” was the child of author Len Deighton.  He became enthused with the project after he saw the hit play “Oh What a Lovely War” by the esteemed Joan Littlewood.  Littlewood had adapted a radio play by Charles Chilton entitled “The Long Long Trail”.  Chilton used only period music and quotes.  Deighton wrote his screenplay along with producing.  In a fit of pique over others wanting credits for work they did not do (including Attenborough getting a producing credit he did not earn), he had his name removed from the screenwriting credit.  Attenborough was chosen over Gene Kelly to direct even though it was his debut.  Deighton insisted Attenborough agree not to make any changes in the script.  A promise he kept.  Historian A.J.P. Taylor acted as historical consultant on both the play and the movie.  Most of the movie was filmed on the West Pier in Brighton.

OPINION:  As you can see above, “Oh! What a Lovely War” is not a well-known war movie.  This is perplexing because it is the best in its subgenre of war musicals.  It is one of the most clearly anti-war films ever made.  If you know little of WWI, this movie will fill in some of the gaps.  It is also a great primer on WWI songs.  It belongs much higher on the list, but I am happy that it made the list at all.