Other "Last of the Mohicans" Movies 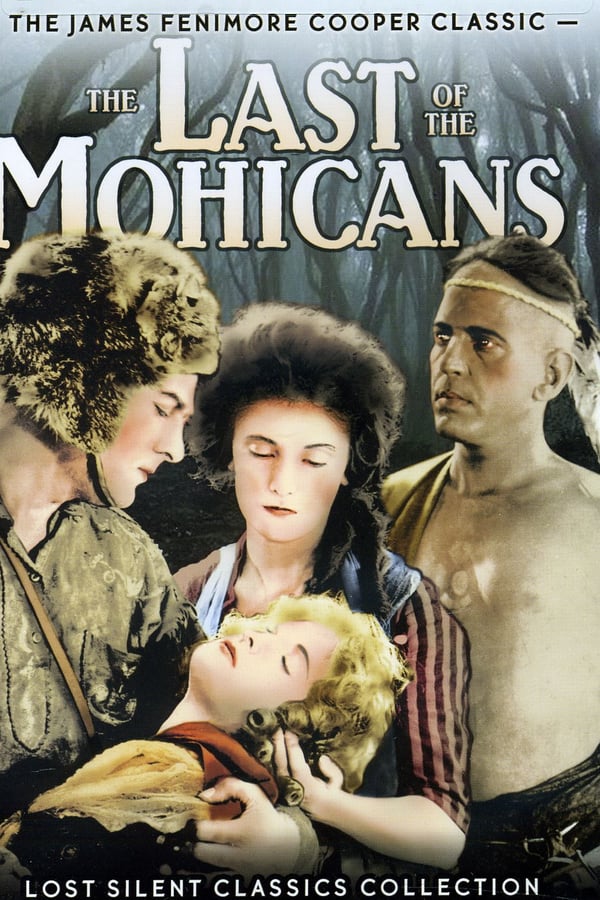 THE LAST OF THE MOHICANS (1920) -  The 1920 version is closer to the novel than 1992.  The main characters are Magua (Wallace Beery, who is top-billed) and Uncas.  Hawkeye is older and ugly.  Duncan is in love with Alice and a Capt. Randolph (who does not appear in the book) is wooing Cora.  She prefers Uncas.  Munro surrenders the fort after Randolph turns traitor and informs Montcalm of the fort’s main weakness.  The massacre is hard-core with the Indians killing babies.  Cora, Alice, and Gamut walk through the chaos, but are captured by Magua.  They are taken to the Delaware camp.  At a council meeting, Uncas makes his case and is given Cora, but she insists on going with Magua instead of her sister.  Cora tries to escape, but is trapped on a precipice by Magua.  She eventually goes over the cliff.  Uncas squares off with Magua in a fight that goes cross country before Magua prevails.  Hawkeye shoots Magua.  Uncas dies holding hands with Cora.  The dual funerals end the movie.

This silent movie is surprisingly good.  The acting is free from the usual histrionics.  It is unpredictable, if you are not familiar with the novel.  The cinematography is eye-opening at times.  Hawkeye shoots an Indian who is hanging from a tree-limb.  The big fight between Uncas and Magua has them silhouetted on the cliff from a far distance.  There are many shots through doorways.  The violence is graphic for an early feature film.  On the other hand, the depiction of the Indians is of its time.  Other than Uncas and Chingachgook, they are savages who sneak up on you with knives between their teeth.

Although closer to the novel, this version jettisons some of the more ridiculous parts of the book.  Hawkeye does not dress up as a bear, for instance.  There is only one village.  There is no colonial militia subplot. 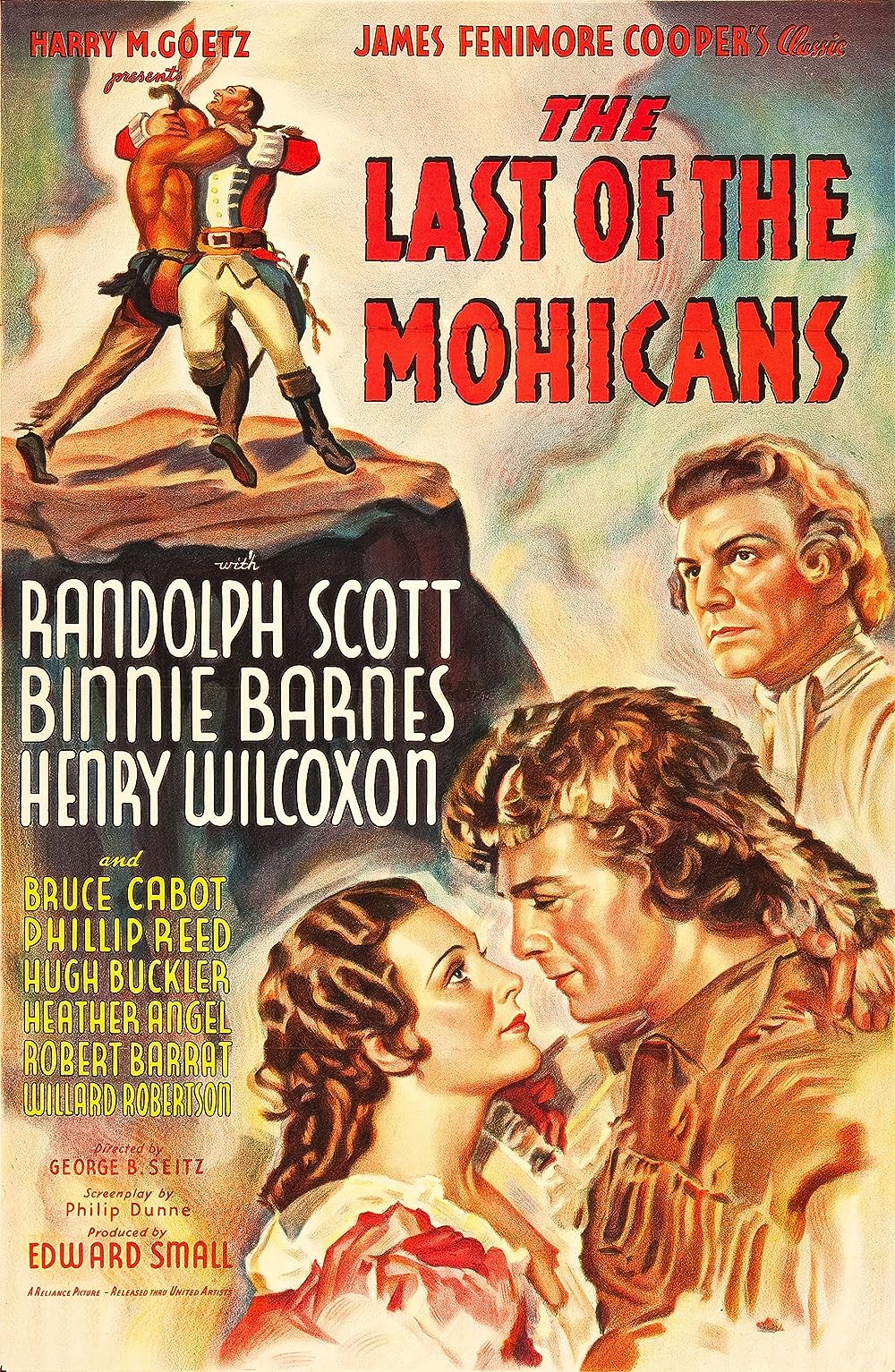 1936 VERSION -  This is the Randolph Scott version.  He plays Hawkeye and this film cemented that role as the main one for future versions.  It opens in London where Heyward is sent by William Pitt to be Munro’s second in command.  Strangely, Duncan is in love with Alice, but she is the brunette and in this version is the older daughter.  Cora is the blonde and is morose because her fiancé has died in a naval battle.  Hawkeye arrives at Fort Edward and argues that England’s fight with the French is not the business of the colonials.  They need to protect their families.  Alice considers him to be a traitor.  Uncas has eyes for Cora.  The girls and Duncan are saved from Magua’s trap by the trio.  They take refuge in a cave, but nothing happens.  They go to Fort William Henry.  Hawkeye helps some of the militia to escape and the trio are jailed.  Hawkeye and Alice’s love blossoms.  After Munro and Montcalm agree to terms, Magua leads the inflamed Indians in the storming of the fort. Magua kills Uncas easily on the cliff.  Cora jumps.  Chingachgook faces off with Magua in a long fight that ends with the drowning of Magua.  The funerals occur now, but the movie continues with Hawkeye winning a shooting contest with Duncan to determine which will take Alice’s place at the stake.  Chingachgook, Duncan, and Alice encounter a British column which attacks the village and rescues Hawkeye.  The movie closes with Duncan defending Hawkeye at his trial.

Although some scenes are copied from the 1920 version, this movie is not as good as it.   The acting is better with Scott charismatic.  He gets some snarky lines like: “Maybe I’ve got enough sense not to wear a red coat in the woods”.   Scott’s Hawkeye totally dominates the movie, with Uncas taking a back-seat.  The actor playing Magua (Bruce Cabot) is not very menacing.  There is no Randolph to hiss at and Gamut is dis-buffooned and transformed into a preacher.  Unfortunately, the action is paltry with the siege and the massacre too brief. 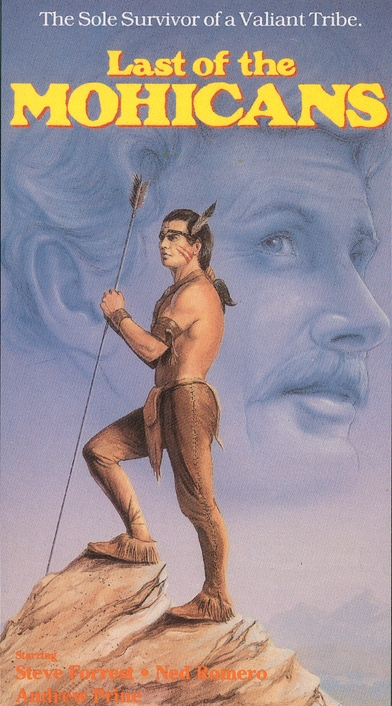 1977 VERSION -  In the 1970s, someone decided it was time to revisit the classic, but in color.  It was made-for-TV and it shows in the mediocre production values.  It is Hawkeye-centric with Steve Forest taking on the role.  He was a B-list star from back then.  The kind of actor that did not mind opening the movie with the line:  “Get out of here, you varmints!”  (A 1970s movie calling Native Americans varmints and still using an all-white cast like all the previous versions!)  The trio rescues Duncan, Alice, Cora, and Gamut from the nefarious scheme of Magua (typecast tough-guy Robert Tessier).  They spend the night in the cave and there is some desultory shooting until Magua sneaks in a back way and captures all but Hawkeye and Chingachgook (who are off on an adventure).  The duo rescue them easily, but they never reach the fort (probably because it was not in the budget).  Magua reacquires the girls and they end up in the separate villages.  Duncan is tied to a tree and Gamut is killed trying to save him.  Alice is rescued easily, but Cora is in the Delaware camp.  The chief is thrilled to learn that Uncas is a Mohican, but he still determines that Cora must go with Magua.  Uncas leads the Delaware warriors after Magua and his crew and a laughably choreographed fight ensues.  Cora runs to a cliff’s edge and Uncas takes a bullet meant for her fired by Magua.  Chingachgook kills Magua.  They receive word of the fall of the fort and the massacre, but daddy Munro lives.

This is by far the worst version.  It might even be worse than the book.  It is poorly acted, although there is some fun watching Tessier as Magua.  The dialogue is pompous with Hawkeye spouting platitudes about the superiority of Indian culture.  (I guess this was to make up for the lack of Native Americans in the cast, but possibly to make up for the previous versions’ depictions of the Hurons.)  Oddly, it dispenses with any romance.  In fact, Alice and Cora are homely.  The action is second-rate, even though the characters are not required to reload their rifles.

Email ThisBlogThis!Share to TwitterShare to FacebookShare to Pinterest
Labels: The Last of the Mohicans