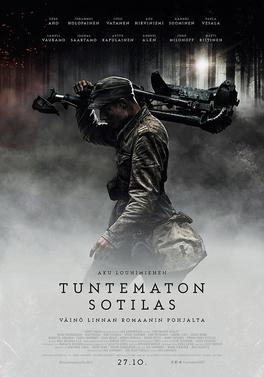 “The Unknown Soldier” is considered to be the greatest Finnish war movie.  Directed by Aku Louhimies, it is the most successful Finnish movie of the 21st Century and the most expensive Finnish film ever.  The movie is based on a famous novel by Vaino Linna and it is the third version of the book.  The production used over 3,000 extras, some provided by the Finnish Defence Forces.  The main actors were put through a boot camp to learn wilderness skills, how to cross-country ski, and how to stay warm in the winter.

The movie covers a small unit of Finnish soldiers in the Continuation War (1941-44).  It opens with an intriguing scene.  Two boys are swimming in a river and this morphs into the same two being shot at as their unit retreats across the river.  One of them is killed.  Their machine gun unit was originally deployed in Eastern Finland in June, 1941.  The government lies to them and proclaims that they are defending their homeland from another (the Winter War had ended fifteen months earlier) attack by the Soviet Army.  Their first action is in northern Karelia in July.  They attack and immediately go to ground due to Russian fire.  Their captain arrives and leads a charge, but is cut down.  This will be the first of many unpredictable deaths.  The men respond and capture the hill.  The combat is brief, but realistic.  From here, the movie settles into a pattern of rest and exposition followed by combat.  In the quieter scenes, several characters are developed typical of a small unit movie.  There is the noble officer who grows into the job, the black marketeer who is in it for the loot, the psychopath, the jokester, the innocent private, etc.  The main character is Corporal Rokka (Eero Aho) who is a veteran of the Winter War.  He has to leave his farm family to bring some experience to the unit.  He is cynical and does not like discipline.  He also is a damned good soldier who knows more than the officers.  The movie follows these men as they campaign into the Soviet Union and back again.  Occasionally we are told where they are so we know where the deaths occur.  The movie fits squarely into the “who will survive?” subgenre.  You don’t have to be a WWII nerd to figure their initial successes are going to turn around so we can come full circle to that opening river crossing scene.

The Swedish members of my War Movie Lovers Face Book group have been encouraging me to watch this movie for some time.  I didn’t need much convincing since I am a big fan of foreign war films.  I love Korean, Russian, and Japanese war movies, in particular.  The only other Finnish war movie I had seen was “Talvisota”.  This is better.  The acting is excellent, especially Aho.  He created one of my favorite war movie characters – Antti Rokka.  If you like Sgt. Steiner from “Cross of Iron”, you’ll like him too.  When asked who he is, he responds: “I’m a model for the gun industry.”  He defies authority (and gets away with it) more than most anti-heroes.  He is the most distinct character, but the others leave their mark as well.  It’s an ensemble effort.  They portray the soldiers realistically as only the higher officers are gung-ho.  Their dialogue is not flowery and is a bit terse as the movie does not have much banter.  It focuses on the common soldiers and the effects of war on them.

The movie is firmly anti-war, but not through graphic wounds and deaths.  It’s hard core enough to get the point across, however.  The combat is superior to most modern war movies.  It starts with brief scenes and gradually the scenes get longer.  Most of the action occurs in forests and hand-held cameras put us with the men.  We know most of the men are not going to survive four years of it, but still the deaths are shocking in their unpredictability.  There is little on the home front (although Rokka makes a couple of trips home to see his resilient wife – a character that does not appear in the book) and the movie is not interested in giving a big picture view of the war.  The enemy is faceless and we get little on command decisions.  There is also nothing about the German role.  I would assume the Finnish audience did not need these things.  The movie is not big on strategy, but is strong on tactics.  Their actions in combat ring true.  They throw grenades and then charge, for instance.  They flank their enemy.   The movie realistically depicts trench warfare.

A non-Finnish viewer won’t learn much about the war besides its effects on typical soldiers.  What you will learn is the Finnish army was not a typical army.  One theme is the army was not big on discipline.  At one point, they abandon a position against orders to hold at all costs.  Rokka sums it up:  “We ain’t here to die; we’re here to kill.”  Another theme is while morale may seep away, the men remain resilient.  They sing a lot.    Although not propagandistic, the movie was meant to honor the Finnish soldiers who fought in the war, but not mythologize them. When outnumbered or outflanked, they run.  There is little indication that they were being used a pawns for their jingoistic and vengeance-minded government and by their Nazi “allies”.

Don’t watch it as a history lesson, although there was nothing I saw that was off-kilter.  Watch it because it is very entertaining and you’ll learn that Finland fought in WWII, albeit for the wrong side.  And their soldiers may have been allied with the Wehrmacht, but they were just regular Joosefs.