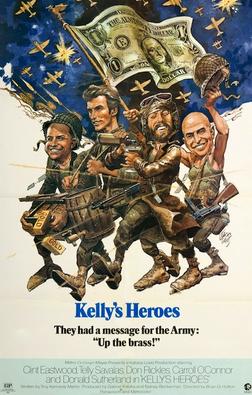 1.  The movie was made in Yugoslavia because of its plethora of WWII era military equipment (and parts of the country still looked like they did when they were rubbleized in the war).  Tito’s army provided a bunch of Sherman M4A3(75)Ws.  The three Tigers were converted T-34s that had been used in the movie “The Battle of Neretva”.  There are 230 Yugo soldiers in the scene where Kelly goes to see Crapgame for the first time.  That’s a Yugo SOKO 522 trainer standing in for an T-6 Texan standing in for a P-47 Thunderbolt.

2.  Eastwood was attracted to the anti-war vibe of the script and was distressed with the final product.  He blamed it on the studio’s cuts, but director Hutton viewed the movie as a comedy from the start.  Eastwood was particularly upset with the cutting of a scene where Kelly and Big Joe discuss the incident that got Kelly demoted for refusing to order a suicide attack.  The scene included discussion of the nature of the war and was the only scene where Eastwood got to act showily.

3.  The screenwriter, Troy Kennedy Martin, was also angry with the decision to up the funny and decrease the pacifism.  He wanted a scene where the platoon boards a train that holds Jewish prisoners and they have to choose between gold and humanity.  I have to go with the studio on this one.  (By the way, “Three Kings” fulfilled Martin’s vision on this.)  Martin also was perturbed with the mine field scene because he wanted the Germans to be elderly home guard types who were sympathetic toward the men caught in the field, but still were blown away.  Again, that’s a head-scratcher.

4.  The movie was originally to be titled “The Warriors” and then “Kelly’s Warriors”.

5.  In an interview Eastwood claimed the movie was not particularly violent.  Moviebodycounts.com puts the death total at 139 which is relatively low in comparison to all the violent movies since (it’s only #35 on the list), but still above my favorite blood bath “Where Eagles Dare”.  Eastwood specifically referenced “The Wild Bunch” and “The Dirty Dozen” (which he called “sadistic”).

6.  There is no Movieexplosions.com so who knows how many explosions there are in the movie, but there are a lot.  Courtesy of the great Karli Baumgartner who was appropriately nicknamed “Boom Boom”.

7.  Sutherland was out for five weeks with a life-threatening case of spinal meningitis.  He came back early and the mental effects of the disease may have influenced his performance.  I mean beyond the recreational drugs.  During filming, Eastwood brought him the news that his wife Shirley Douglas (Kiefer’s mom) had been arrested for trying to buy hand grenades for the Black Panthers from an undercover FBI undercover agent.  With a personal check, as Eastwood pointed out as he rolled on the floor.

8.  Ingrid Pitts from “Where Eagles Dare” was scheduled to be the only female character, but she was cut from the film right before she boarded an airplane for Yugoslavia.

9.  The bizarre “Burning Bridges” by the Mike Curb Congregation reached #34 on the Billboard hit list.  It made it to #1 in Australia.  Hank Williams Junior’s “All for the Love of Sunshine” (anachronistically used in the railway station slaughter scene) reached the top of the country music charts the year it was released – 1970.  Speaking of music, the music for the negotiation with the German tank commander was an homage to Ennio Morricone of spaghetti western fame.  Note the jangling spurs.  The music that builds to the assault on Claremont was reused in “Inglourious Basterds”.

10.  Mulligan (what a great name for an inaccurate artilleryman) was played by Telly Savalas’ brother.

11.  Here are the significant deleted scenes (besides the Kelly/Big Joe discussion mentioned above):

-   after a night with local girls, Odd Ball and crew pack up to leave

-  after the mine field incident, the men refuse to go on and Gutkowski pulls a gun on Kelly, but Big Joe and Crapgame support Kelly and cool the men down

-  Gen. Colt is in bed with some women when he is told a unit had broken through

-  when the truck full of gold drives off into the sunset, some GIs yell “hey, you’re going the wrong way”