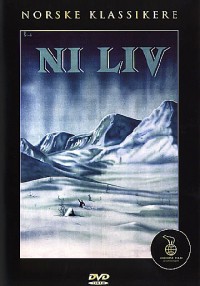 “Nine Lives” (Ni Liv) is the first Norwegian movie about Jan Baalsrud.  Baalsrud was a resistance hero from WWII.  He survived a long stretch of hiding from the Germans under very adverse circumstances.  The movie was based on the book We Die Alone by David Howarth.  It was nominated for Best Foreign Language Film at the 1958 Academy Awards and in 1991 Norwegians voted it the greatest Norwegian film.

The movie leads with credit to the more than one hundred Norwegians who helped Baalsrud (Jack Fjeldstad).  He is in a hospital in Sweden.  Queue the flashback.  Jan and nine Norwegian commandoes land in Norway on a sabotage mission.  They make contact with the wrong A. Hansen and he tells the Germans.  A German gunboat is sent and the commandoes have only enough time to blow up their explosives (along with their fishing boat) and attempt to escape.  Only Jan makes it.  Let the chase begin.  He’s got a long way to go to get to neutral Sweden.  Besides Nazis on his trail, he has problems with the freezing temperatures and snowy conditions.  He suffers from snow-blindness and frostbite.  At one point, he has to amputate his toes.  He goes through periods of hallucination.  He spends weeks alone holed up in hideouts with little food.  He survives through strength of will, aid from strangers, and blind-ass luck.  The movie makes it clear that he is not the only hero.  There were brave Norwegians who were willing to risk their lives to help him.

This movie was nominated for an Academy Award?  I can see it being nominated for the Norwegian equivalent of best picture, but Best Foreign Film?  I give it credit for being historically accurate and not enhancing the narrative into an action film (like the recent “The 12th Man”), but that does mean that there are stretches that are kind of boring.  While this is accurate, imagine how boring it was for Jan as he spent weeks in a shed, for instance.  Hell, he was so bored he cut off his toes!  The story was probably familiar to most historically literate Norwegians, but it did provide cinematic recognition for one of their greatest heroes and brought him to people like me who watch a lot of foreign war movies.  It also nicely gives credit to the brave civilians who helped him.

The problem with the film is most of it is unrealistic.  Baalsrud goes through a lot, but he doesn’t look like it.  He never looks like he is in terrible shape.  His facial hair does not keep up with his experiences.  There is no suspense.  He has few close calls.  This is probably accurate, but does not make for a exciting movie.  Contrast it with the recent Baalsrud movie and you can see how modern movies use more artistic license to get you on the edge of your seat.  I faulted “The 12th Man” for over-enhancement.  For instance, it has a fictional Gestapo villain to cat and mouse with Jan.  But “Nine Lives” has no villain at all.  And it doesn’t show him cutting off his toes.  There we have the basic differences between a 1950’s war movie and a modern war movie.  I bet a current poll of Norwegians would not place it as the greatest Norwegian film.