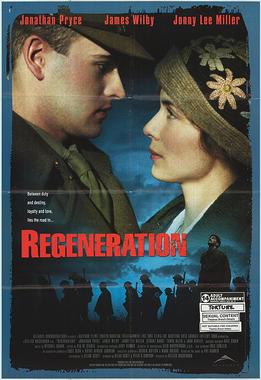 Regeneration was the first in a trilogy by British author Pat Barker.  The other two novels, The Eye in the Door and The Ghost Road, continue the stories of Rivers, Prior, and Sassoon.  The trilogy is firmly in the WWI novel tradition of “war is hell!”  It deals with trauma and recovery.  What better war than the Great War for that?  Barker was inspired by the experiences of her step-grandfather who was wounded in the war and never talked about it.  The seed of the story came from her neurologist husband’s interest in psychiatrist W.H.R. Rivers.  The book’s title is a reference to Rivers’ pioneering work in nerve regeneration, but the story concentrates on his work with “shell shock” victims.  Rivers works at Craiglockhart hospital which before the war was a hydropathic (water therapy) institute.  From 1916-1919 it was turned into a psychiatric hospital and Rivers became the most famous doctor there.  Barker decided to blend actual historical figures into the fictional narrative.  Wilfred Owen and Siegfried Sassoon were famous poets whose experiences in the war inspired great poetry.  Barker used their poetry and eyewitness accounts to enhance authenticity.  I must credit Barker with making an enlightened decision to write a book that combines shell shock treatment with real life figures.  Using Sassoon’s anti-war stance as the focal point was pure brilliance.  And, although a work of fiction, the novel is amazingly accurate.

The book opens with Sassoon’s “Finished with the War:  A Soldier’s Declaration” which was an open letter condemning the war as a war of aggression.  Rather than a messy court-martial, Sassoon’s friend Robert Graves (another poet) convinces a government board to assign him to Craiglockhart as a mental case, thus discrediting his screed.  Rivers is given the case and feels it is his duty to return Sassoon to the front.  Sassoon makes the acquaintance of Owens and becomes something of a mentor to him.  Sassoon (who was already a famous poet) gets Owens to use, instead of ignore, his war experiences to inspire his poetry.  Owen comes to realize that writing can be “like exorcism”.  Barker created the fictional character Billy Prior as an antagonist to Rivers’ talk therapy.  At first, he is suffering from mutism and amnesia, but Rivers goads him into talking again.  Prior is a difficult patient, although he does want to return to the war because it is the proper British thing to do.  He had not been at the front long enough to “join the club”.   “[British men] had been trained to identify emotional repression, as the essence of manliness.  Men who broke down, or cried, or admitted to feeling fear, were sissies, weaklings, failures.  Not men.”  In his sessions with Rivers, Prior uses Rivers’ own PTSD as leverage.  Rivers is clearly traumatized by his duty of “curing” men so they can be sent back to the reason for the cure.  Returning the damaged to be damaged.  “Rivers was aware, as a constant background to his work, of a conflict between his belief that the war must be fought to the finish, for the sake of the succeeding generations, and his horror that such events as those which had led to Burns’ breakdown should be allowed to continue.”  Prior is given a fictional girlfriend.  Sarah is a munitions worker.  “Men said they didn’t tell their women about France because they didn’t want to worry them.  But it was more than that.  He needed her ignorance to hide in.”  Some of the other patients include Burns (based on an actual patient), who cannot eat food without remembering being thrown by an explosion to land face first into a rotting corpse’s stomach.  Burns gets his own storyline, but the novel is really about Rivers/Sassoon, Sassoon/Owens, and Rivers/Prior.  The main thread being Sassoon’s arc toward the medical board that will determine whether he will return to combat.  In the end, honor trumps common sense and the survival instinct.

The movie follows the book closely, but streamlines the plot by eliminating some scenes.  It wisely adds combat scenes to emphasize the horrors that brought on the shell shock.  (Thankfully, we don’t have to see the reason for Burns’ trauma.)  These are done in the recent visceral cinematography of war films and balance the otherwise dialogue-focused events of the hospital.  For instance, the movie opens with an aerial view of no man’s land, whereas the book opens with Sassoon’s letter.  The movie, strangely, does not give the audience the full text of the letter.  It cuts the scene where Graves explains to Rivers the Sassoon situation and gives him some of his poems.  The movie, being British, makes the assumption the audience is already familiar with Graves, Sassoon, and Owens.  This, of course, does not apply to American audiences and might explain the movies tepid reception in the States (where it bizarrely was renamed “Behind the Lines” – a double-meaning that was meaningless to most).

In the novel, Barker is able to flesh out the stories of Rivers, Sassoon, Owens, Prior, and Burns.  Burns is virtually left out of the movie.  The movie leads off with Owens finding Burns naked in the woods amongst dead animals.  This scene was inspired by a sequence in the novel where Burns goes off in a bus, gets off, goes in some woods, and finds a tree with dead animals hanging in it.  He then undresses, but later reclads himself and returns on his own.  In the book, Rivers approves the release of Burns when clearly he is not stable.  Rivers visits him and finds him to be on the brink of another breakdown.  Rivers reaches this brink himself and gets a job with the Royal Flying Corps before Sassoon leaves.  He returns for Sassoon’s board.  The scene with Doctor Yealland (a real historical figure) takes place after Rivers leaves Craiglockhart and is well-depicted in the movie.  The visit to Yealland is better placed in the book because it comes after Rivers has left his patients and is questioning his own methods.  The Prior/Sarah romance is given more coverage in the book.  You get more of the roller-coaster ride that a relationship with Prior would involve.   For closure, the movie throws in Sassoon being wounded when he returns to the front (which actually happened) and the corpse of Owens.  I assume Barker left this for the second book of the trilogy.

As you would expect, reading the novel will give you more perspective on why the patients, and Rivers, behave the way they do.  You get more of their back-stories.  For instance, you find out that Prior’s breakdown came when he picked up a severed eye.  Barker makes Rivers into something of a patient himself, the movie only alludes to this.  The novel’s Rivers has more of a stammer (which was a bit of literary manipulation as he stuttered since childhood) and has nightmares.  The movie has to streamline the dialogue so the book has longer and more satisfying sessions between Rivers and his patients.  On the other hand, the screenwriters were able to trim some of the flab from the book. For example, the movie eliminates Rivers’ awkward visit with the “cured” Burns.  Unfortunately, for people hoping to learn more about the poetry of Owens and Sassoon and the process that brought it about, the movie does not have time to delve into that.  Literary history takes a back seat to the history of trauma therapy.  Mores the pity.

In conclusion, I had a hard time choosing between the book and the movie.  But, then again, one does not have to choose.  As is my policy, I recommend watching the movie first and then reading the book.  This usually works out well for me.  In this case, the movie is very well done and faithful to the book.  The cast is excellent in embodying the characters from the book.  The screenwriter, Allan Scott, has delivered more than just a Cliff Notes version of the book.  He retains a lot of the dialogue and most of the scenes.  His deletions make cinematic sense.  If you are not into reading, the movie is certainly an acceptable way to learn the remarkable story of Rivers, et al.  I beg you to follow up the movie with some reading of the poetry of Graves, Sassoon, and Owens.  Here is Owens’ “Anthem for Dying Youth” (which Owens and Sassoon discuss in the movie and tinker with in the book):

What passing-bells for these who die as cattle?

— Only the monstrous anger of the guns.

Only the stuttering rifles' rapid rattle

Can patter out their hasty orisons.

No mockeries now for them; no prayers nor bells;

Nor any voice of mourning save the choirs,—

And bugles calling for them from sad shires.

What candles may be held to speed them all?

Not in the hands of boys, but in their eyes

Shall shine the holy glimmers of goodbyes.

The pallor of girls' brows shall be their pall;

Their flowers the tenderness of patient minds,

And each slow dusk a drawing-down of blinds.