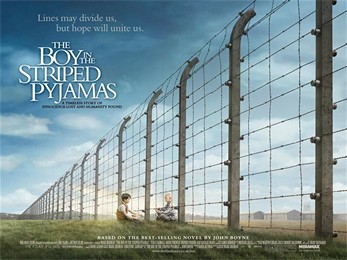 The novel by John Boyne has become recommended reading for many middle and high school students.  It was natural that it would be made into a movie two years after it was published.  The movie has been popular with kids who read the book and kids who don’t want to have to read it.  I have not read it yet, but I have learned that if you are watching it to prepare for the test or book report, the ending is different.  But otherwise the movie follows the book closely.  The screenplay was written by Mark Herman and he directed as well.  (For some reason, it is the last movie he directed.)  The filming was done in Hungary with a mostly British cast.  It cost $13 million and made $44 million.

Bruno (Asa Butterfield) is the pampered son of an SS officer (David Thewlis).  The family lives in Berlin where Bruno lives the idyllic childhood of an upper-class German before bombs came raining down.  Occasionally his romps with his pals are disturbed by Jews being rounded up, but he is clueless.  The family is suddenly uprooted when his father is transferred to Poland.  They now live in an isolated house near what everyone except Dad assumes is a farm. Bruno is bored, so he goes exploring and finds the farm is surrounded by barbed wire.  He thinks the people wearing striped pajamas are the farmers.  He meets another eight-year-old named Shmuel (Jack Scanlon).  When he asks him what is being burned in the chimneys, Shmuel doesn’t know.  He’s pretty clueless, too.  Even though Bruno is clueful enough to know Jews are to be taunted, he befriends Shmuel and begins to sneak away to “play” with him.  Meanwhile, his older sister Gretel (Amber Beattie) has become a Hitler fan-girl.  Things come to a head when Bruno’s mother (Vera Farmiga) discovers what her husband’s real job is.  This is the first domino that leads to tragedy.

Speaking of those dominoes, some of them strain credulity.  For instance, Shmuel becomes a servant in Bruno’s home for an awkward plot insinuation that Bruno is still a typical German in order to set up his redemption.  But if not for dominoes being lined up, we’d have a lot less movies.  The last domino must have been great for the sale of tissues at the concession stand, but it feels tacked on to balance the rest of the film.  The film is tilted toward Bruno’s family’s life rather than Shmuel’s.  While Bruno’s father plays a prominent role as the evil, amoral Nazi, Shmuel’s father does not make an appearance.  This is the story of how Bruno’s rose-colored existence figuratively goes up in smoke as Shmuel’s stripe-colored existence literally does.  If that metaphor seems tortured, it does reflects the plot.

The plot is a balancing act.  The family is equally divided between the Nazi and Nazi-wannabe and the horrified spouse and her beatific son.  Heck, the grandparents are balanced between Kool-aid drinking grandpa and grimacing granny.  That’s three Nazi characters (four if you throw in their indoctrinating tutor and five if you count Dad’s lackey) and three who stand in for the silent minority.  And on the other side we have one Jewish boy (and a sacrificial lamb of a servant) who doesn’t even know why he is in the camp and what is taking place there.  I guess someone felt we needed a Holocaust movie from the Nazi point of view.  It works better as a bedtime story (or young adult novel) than as a realistic Holocaust story.  And hence the problem.  It was more popular with a younger audience than movies like “Schindler’s List” and it and the novel had a strong effect on many in that demographic.  In some ways, the movie replaced “The Diary of Anne Frank” for Milennials.  Unfortunately, many of the readers (and watchers) thought it was a true story.

This means many viewers were left with the impression that few Germans knew Jews were being imprisoned.  And that it was not unusual for a Jewish boy to have the run of a camp and would be able to befriend a German boy.  And they would be able to interact through one line of barbed wire when all camps had two.  And the camps had poor security that would allow this interaction.  Although it is never specifically named, the camp is clearly meant to be Auschwitz.  It is significant that the museum there has disowned the book.  But no one connected with the movie ever claimed that it was fact, so I guess we can be more harsh with the teachers who assigned the book or showed the movie and allowed students to make it their main source on the Holocaust.

The movie was critically acclaimed, but it is definitely overrated.  While not as egregious as “Life is Beautiful”, it is in that group of Holocaust movies that minimizes the horrors.  In it, the Holocaust breaks up a perfect German family.  Sob.  In the end, we feel more sympathy for them than for Shmuel’s family (who we do not see).  It is meant to be a loss of childhood innocence film, but the true loss of innocence is his mother’s.  But do I need to remind you that she knew she was marrying a Nazi, so there’s that.

Place me in that group who found this movie to be problematic.  I would certainly not have shown it in my history classes.  I appreciate historical fiction and this is a movie that is well-made with some very good performances.  I’m done harping on the adverse impact it had on younger viewers, but adults should be offended by the focus of emotions on the Germans.  And if you are like me, you might be put off by the unrealistic plot developments.  The hoops the movie has to jump through to reach its stunning twist ending are head-scratching.  Since I did not need to watch the movie for a book report, I can tell you that this movie is not in the upper tier of Holocaust movies.  Please watch the great ones like “Schindler's List”, “Son of Saul”, “Escape from Sobibor”, and “The Grey Zone” before you watch this.  And if you are a teacher showing it in class, please point out that it is fiction and that the Holocaust had more impact on Jewish families than on German ones.

Email ThisBlogThis!Share to TwitterShare to FacebookShare to Pinterest
Labels: Auschwitz, Holocaust, The Boy in Striped Pajamas