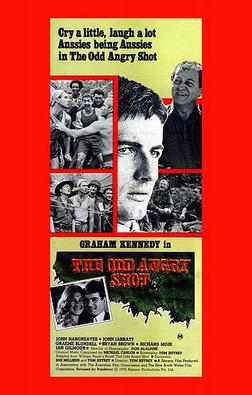 “The Odd Angry Shot” is an Australian war movie.  It was directed by Tom Jeffrey and was based on the novella by William Nagel.  Nagel served in Vietnam in the Australian Special Air Service.  His book was based on what he experienced in the war.  The movie was filmed in Australia and had full cooperation from the Australian Army.  Jeffrey was allowed to use the Jungle Warfare Training Centre and the army  provided several helicopters that had been used in the war.  The movie was a modest success, but was not well received by critics.  Many of them carped about the movie avoiding criticism of Australia’s involvement in the war.  The movie was scheduled to be shown to Prince Charles when he made a royal visit to Australia in 1979.  The event did not occur due to a complaint by a politician concerning the movie’s nudity.  God forbid the Prince be exposed to penises!

Or a boob, which appears in the first minute of the movie.  Bill’s girlfriend lets him get to at least second base (or the cricket equivalent) before he goes off to war.  The movie forgoes training (even though the training center was available) and puts Bill and his mates on an airliner headed for the Nam.  They drink Fosters on the way. A soldier comments “this is the way to go to war”.  This will be the first of nine appearances of Fosters and other Australian brews in the film.  Speaking of product placement, there is a nice plug for Qantas airlines.  “If you are going to Vietnam – fly Qantas!”

In Vietnam, the newbies are plunked down in a muddy base camp.  This quickly developes into a small unit film.  Specifically four blokes – Bill (John Jarrett), Harry (Graham Kennedy), Bung (John Hargreave), and Rogers (Bryan Baker).  Harry is the Pop of the unit.  He is a corporal who is a veteran.  He tells the men to “shoot the Charlies, not the civilians”.  When one asks how they will know the difference, Harry says “you’ll know when they shoot your bloody head off”. Ha ha!  But not a bad summary of the dilemma of identifying the enemy.  Speaking of the level of humor, there is a running gag involving Harry’s interchanges with the cook.  Typical is this gem:  “Be nice to me Cookie, or I’ll piss in your scrambled eggs”.  This actually gets a big laugh from his messmates.  And I suppose, the Australian audience.

The constant rain causes grumbling, but it’s a mortar attack that results in the first deaths which clues the men to the fact that this war will not be as fun as they thought.  Keep the Foster’s coming.  An occasional mission generates some moments of brief combat and forces the men to whisper their soldier jibes.  There is a lot of soldier banter in this movie.  Most of it sounds natural.  These guys are chums and the camp is like a fraternity house.  Only with more beer.  There is less dysfunction than in a frat house as all the guys get along famously.  They shower together, ladies.  Just as I was noting the appearance of Bryan Baker’s ass, we are treated to the full Baker.  (In Australia, this is appropriate for post-fifteen year olds, but not British princes.)  We learn a lot about life in the Australian Army in Vietnam.   They play cards, go to brothels, get Dear John letters, and participate in a spider versus scorpion match with an American unit (followed by a brawl, naturally).  You know, the usual soldier in Vietnam stuff.   This leads up to the big set piece battle for a bridge.  Except it does not turn out to be that big.  Just big enough to get a main character killed in a laughable way and to set up the ironic withdrawal from the objective as a metaphor for the war tactics.  With that unaccomplished, it’s time to say “Hey, Cookie, fuck you” and take that Qantas back to the big barbie.

“The Odd Angry Shot” is highly thought of by some.  Don’t count me in that group.  In truth, it is nothing special.  It comes off as a made-for-TV movie with the production values associated with that ilk.  The effects are low budget (most of the budget went for beer), but the script does not call for much because there is a disappointing lack of combat in it and what little there is is second rate with the silly deaths and gruesome wounds associated with a drive-in movie horror flick. The title is supposedly a reference to the random nature of mortality in war, but the truth is that every death is tragic because these guys seldom get put in harm’s way.  That may be realistic to the nature of the Vietnam War where contact with the enemy was rare, but it does not make for exciting cinema.  In fairness, the movie was not intended to be an action/adventure type like “Siege of Firebase Gloria” (also scripted by Nagle).  It is more a movie about the camaraderie of soldiers.  In that respect, it is satisfactory.  Other than the misstep of having all the characters getting along famously, the behavior is fairly close to soldier dynamics in Vietnam.  All of the men are likeable and there are no villains (even among the officers) and the enemy are faceless and atrocity-free.  The Viet Cong are not demonized, but then neither are the Aussies.  The Australians had a reputation for being nasty customers (e.g. ear-taking), but there is no reference to this infamy in the movie.  They are just regular joes going about their job and waiting to go home.  The only sop to the doves is Harry becoming a bit cynical towards the end.  He feels they will lose the war and no one will care when they return home.  He also proclaims the tired (but true) “the poor fight the wars” complaint.  That moment of philosophizing is swept away in a tide of bon homme towel- snapping dialogue and antics.  You do not come out of the movie thinking Australia made a big mistake being in Vietnam and these men were being used.  Instead, you leave thinking you might want to go to that fantasy war camp except for the fact that you could get killed.

Still, the movie is not terrible like “Siege of Firebase Gloria” and the acting and dialogue is tolerable.  It is fun watching Bryan Brown one year away from the immensely better “Breaker Morant” and Graham Kennedy (who apparently was a big TV comedian at the time) is strong as Harry.  However, John Jarratt is a stiff as Bill.  The spider outacts him.  The movie has some humor, but it is best to do like the cast and crew – drink a lot of Fosters while watching it.  There are two things you will remember about the movie – the amount of beer consumed and the cool M-16s with grenade launchers they used (although I do not recall them ever actually firing a grenade).  Oh, and I suppose some will recall the full frontal shower scene.  Even Verhoeven in “Starship Troopers” was not willing to top this movie.