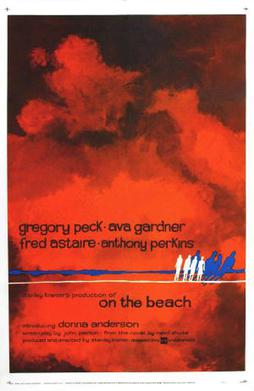 “On the Beach” was the first major apocalypse film.  It is based on the Nevil Shute novel that was published in 1957.  Shute was collaborating with director Stanley Kramer (Judgment at Nuremberg).  As John Paxton’s script progressed, Shute became increasingly upset with the changes to his novel.  He dropped out and disowned the film.  He detested the final product.  His death from a stroke one month after release is sometimes attributed to his extreme dislike of the film.  The film was made mostly in Australia.  Kramer had to do a lot of reshoots due to sightseers getting into shots.  Gregory Peck joined the cast because he liked the movie’s anti-nukes theme, which conformed to his personal beliefs.  Fred Astaire made his dramatic film debut.  The movie got a massive rollout.  It premiered in 18 countries on all seven continents (including Antarctica).  It was the first American movie to premiere in the Soviet Union.  In spite of the marketing campaign, the movie failed at the box office.  It was critically-acclaimed, however.  It was nominated for Oscars for Best Editing and Score (Ernest Gold).  Gold’s love theme was released as a single and reached #57 on the charts.  The film was nominated for Best Drama at the Golden Globes.  Kramer won the UN Award at the BAFTA’s and Ava Gardner was nominated for Best Foreign Actress.  Fred Astaire’s race car was a 1955 Ferrari 750 Monza Spider, one of only 35 built.  In 2011, it sold for $2.5 million.  The Department of Defense refused to cooperate with the film.  The submarine was played by the British HMS Andrew.  If you look closely, you will see it flying a 49- star flag.  That flag lasted only one year before Hawaii came in.

The movie begins in Melbourne in 1964.  There is a vague reference to “it” coming to Australia.  The mysterious force is a radiation cloud.  An undisclosed nuclear war has devastated the other continents and Australia is about to join the club.  The movie is purposely vague as to how the world got into this.  (In the novel, Albania launches missiles at Italy, then Egypt attacks the U.S. and Great Britain using Soviet planes.  Blaming Russia, MAD kicks in.  So, it’s definitely fiction.)  The movie works as a sequel to “Fail Safe”.  We see the aftermath of a major nuclear war.

Peck plays Commander Towers of the USS Sawfish.  Coming aboard as a liaison with the Australian navy is Lt. Commander Holmes (Anthony Perkins).  He leaves behind the only Australian who does not have a stiff upper lip.  Everyone else is going about their lives as though nothing is going to happen.  Maybe they are in denial, like Towers, who still has hopes for his wife and children in America.  These hopes are encouraged by a mysterious Morse code message coming from San Francisco.  The sub is tasked with checking it out.  Before leaving, Towers starts a chaste affair with the feisty Moira (Gardner).  The movie settles into two threads. One is the sub trek.  The other follows Moira and Julian (Astaire).  He is a scientist who blames their fate on Mutually Assured Destruction.  Julian’s hobby is racing cars so we get some action and plenty of crashes.  If you are waiting for a happy ending, stop after Julian wins the race.

“On the Beach” is a somber movie, which is appropriate for its narrative.  For an apocalypse movie it is pretty tame.  No zombies. Luckily, it has a strong cast to hold your attention.  The big four bring it, especially Astaire who proves he doesn’t have to dance to score.  The cinematography is effective.  There are a lot of closeups to tie you into these doomed souls.  The movie has the same message of nuclear madness as “Dr. Strangelove” and “Failsafe”, but it delivers that message in a depressing way.  That makes it more realistic, but this realism is too sanitary.  San Francisco is like a ghost town, there are no bodies.  There is no sign that there was a panic.  In Australia, there is no hedonism as the end nears.  I guess it gives us hope that in a future nuclear war, if your city is not a target, your fellow citizens will take the approaching radiation cloud calmly and stoically.  I don’t know about your locale, but I’m damned sure that is not what is going to happen where I live.  With that said, we would be less likely to have that scenario if the leaders of the world powers saw this film.  Since it premiered in Moscow, maybe it caused Khrushchev to think twice in the upcoming Cuban Missile Crisis.

Email ThisBlogThis!Share to TwitterShare to FacebookShare to Pinterest
Labels: nuclear war, On the Beach