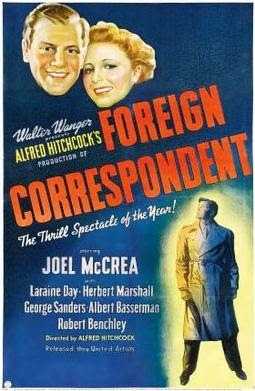 BACK-STORY: “Foreign Correspondent” was directed by Alfred Hitchcock and was only his second American production (after “Rebecca”) and was released in 1940. The film has an incredible 14 writers which can be explained by the desire to keep up with current events during the filming. It was a critical and box office success. It was nominated for 6 Academy Awards including Best Picture (ironically, it lost to “Rebecca”), but won none. The events and characters are fictitious, but obviously Hitchcock meant it as a commentary on the storm clouds rising in Europe. It was dedicated to “those forthright ones [foreign correspondents] who early saw the clouds of war while many of us at home were seeing rainbows…”.


OPENING SCENE: The movie opens in an American newspaper office in August, 1939. The publisher is complaining about the lack of facts from his reporter in Europe. Let’s send an old-fashioned crime reporter like Johnny Jones (Joel McRea). Since Jones is clueless about events in Europe, he has “a fresh, unused mind”. He is told to go dig up some news by interviewing a Dutch diplomat named Van Meer who is a leading peacenik. Before he leaves, they change his name to Huntley Haverstock.

SUMMARY:   In London, Haverstock meets Van Meer in a cab, but does not get an interview. He attends a luncheon hosted by the Organization of Peace and Understanding which is led by a peace activist named Fisher. He meets Fisher’s daughter Carol (Larraine Day) and they get off on the wrong foot (surprise!).

Later at a peace conference in Holland, Haverstock meets Van Meer again, but he does not recognize Huntley – strange. Soon after, in a famous scene full of umbrellas, Van Meer is assassinated. Haverstock is the only one who sees the assassin and he gives chase (“follow that car!”) The car happens to hold Carol and her boyfriend Scott ffolliott (spelling of the name being one writer’s contribution apparently). We get an old-fashioned car chase filmed in front of screen. Fast and the Furious, it isn’t.


The car chase takes us to the famous windmill scene. While Scott and Carol go for the police, Scott stays to snoop unarmed (except for his lethal notebook). Inside the windmill he finds a drugged Van Meer. He hides in plain sight from the bad guys until he can climb out a window to get the police. Meanwhile the villains flee in a plane just before the cops arrive. (Surprise!) When he gets back with the cops, the windmill is empty so they think he’s nuts (naturally).


Back at the hotel, Haverstock avoids being taken by two henchmen by climbing into another hotel room’s window. Guess whose room it is? She does not believe him, but he plays on her sympathies and she melts (surprise!) They board a ship just before the bad guys can get on board (phew!) Considering they have known each other all of a couple of days, it’s time to get married. Haverstock proposes – “I’m in love with you, and want to marry you”. Carol – ditto. Huntley: “Hmm…that cuts down on our love scene quite a bit, doesn’t it?” This proposal was supposedly based on Hitchcock’s proposal to his wife Alma. (I would like to think Hitchcock’s was not as precipitous.)

It turns out Huntley’s fiance’s dad is dirty and he tries to bump off Haverstock by arranging for a detective to “protect” Huntley. The hitman lures HH into Westminster Cathedral to view the city and then pushes him out of a window. End of movie. No wait, HH turns at the last second and the bad guy plunges to his death (surprise!)

In the London office, Scott reveals he is a British agent after Fisher’s gang. His plan is to “kidnap” Carol and offer her in exchange for Van Meer. Robert Benchley joins the cast for some comic relief as a besotted newsman. HH takes Carol off for some treacly romance replete with sappy music so Scott can con Fisher into revealing Van Meer’s whereabouts. Carol gets upset with HH and comes home right at the moment Fisher is going to give up Van Meer. What timing! End of movie, right? No, because Scott overhears Fisher’s instructions to the cab driver taking him to Van Meer.


They are torturing Van Meer with bright lights and swing music (I am not making this up) when Scott is brought in with a pistol in his back. Fisher wants to know what “Clause 27” is. Scott interrupts to keep Van Meer from caving. Why do the villains allow him to intervene? No telling. Eventually they torture Van Meer off screen and he talks in seconds. Next thing we know, Scott is fighting his way out. Apparently the bad guys’ guns have no bullets in them. The police arrive and VM is rescued but Fisher escapes. End of movie, right? No.

The main characters happen to all be on a transoceanic flight together. Over the vast Atlantic Ocean, the plane passes over a German warship (apparently sent to shoot it down!) and gets hit by flak. The plane crashes in a famous scene which must have looked awesome in 1940, but not so much today. The survivors (i.e. the main characters – sorry extras) huddle on one of the downed plane’s wings. Someone must get off to balance the wing. Guess who decides to redeem his honor and avoid prosecution as a spy by slipping off to a watery martyrdom? One wonders if the villain had been Japanese whether he would have been allowed such an honorable death. The rest are picked up in minutes by an American ship which is promptly sunk by the German warship. Just kidding!


From on board their savior, Haverstock sends the story with Carol’s permission because she is a patriot first, daughter second, damn it! HH is now a “soldier of the press”.

FINAL SCENE: Because Hitchcock made a trip to London pre-Blitz and pre-release, he tacked on the ending with HH broadcasting from a British radio station Edward R. Murrow-style. Hello, America. Hang on to your lights, they are the only one’s on in the world. The “Star Spangled Banner” plays over the credits in case you did not get it the propaganda message yet.

WOULD CHICKS DIG IT? Probably more than most war movies. There is romance and attractive leads. There is peril and suspense, but no graphic violence. Considering the marriage proposal scene, men might want to be careful watching it with impressionable girlfriends. (Honey, why can’t we do that?) Believe or not, there is no cursing or gratuitous sex.

CRITIQUE: First, let me get something off my chest right away. This is not a war movie by my definition of a war movie. I would classify it as a spy thriller. Second, I do not even think it is a good movie, period. It escapes me why it is critically acclaimed. (Aside from my theory that critics tend to love movies about writers because they are writers too. This might explain the unbelievable triumph of “Shakespeare in Love” over “Saving Private Ryan” for Best Picture) I am a big fan of Hitchcock, but I could name at least five of his movies that are superior to this movie.

The love story is phony. Only from Hollywood do you get such unrealistic handling of human relationships. Even if the courtship and proposal mirrors the Hitchcocks, it does not mean it’s true to life. Much of the plot relies on incredible luck. Large parts of the movie are unrealistic. You have to turn your brain off to swallow some of the whoppers. Even the famous set pieces are unreal. In the assassination, the assassin gets away with ridiculous ease. In the windmill, Haverstock moves around in plain sight without being seen. The villains are wimpy, which is unusual for Hitchcock.

ACCURACY:  This category does not apply to this movie. Thank goodness.

CONCLUSION:  What the hell is this movie doing at #86 on Military History Magazine’s list of the 100 Greatest War Movies? It is not a war movie and not a great movie. It is another example of the critics’ love of the old classics. It is a little infuriating that a fictional movie that lionizes war correspondents is considered to be better than much superior films that honor actual soldiers. Sorry “Breaker” Morant, Huntley Haverstock’s movie is considered by the “experts” to be better than yours.