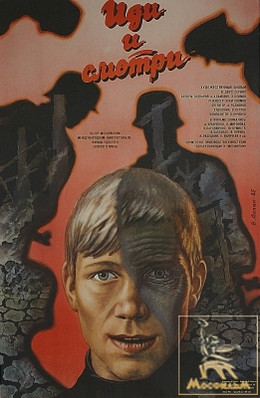 "Come and See" is a Russian film that was released in 1985.  It is a horror war movie that is set in Byelorussia during WWII.  The Germans are occupying this area of the Soviet Union and partisans are fighting back.  The protagonist is a teenage boy named Florya who joins a partisan unit against the wishes of his mother.  He developes a relationship with a girl named Glasha and they return to his village to find it a ghost town.  The survivors have taken refuge on an island which Florya and Glasha have to wade through a bog to get to in one of the slimiest scenes in movie history.
Florya leaves to find food with three of the villagers.  His adventure includes carrying around a German dummy for no apparent reason and the stealing of a cow.  He ends up in another village which becomes the target of an Einsatzgruppen.  The Nazis round up the villagers and herd them into the church.  What happens next is horrific, including the reaction of the Germans to their handiwork.  The scene bears comparison to some of the scenes in "Schindler's List".  This part of the film is replete with eerie music, haunting images, and the use of speeded up film adds to the bizarre nature.
Florya, having escaped the mayhem, wanders into the aftermath of the partisans' ambush of the Germans.  Several Germans have been taken captive, including their commander.  He pleads innocence, but one of the Nazis brazenly states that the Russians are inferior and will be exterminated.  The "trial" has a predicatable verdict, but the punishment does not ring true.  Florya notices a portrait of Hitler which he proceeds to shoot as footage of Hitler's life unwind in reverse order culminating with the baby Adolf.  This is really cool.
This is a highly regarded film, but I found it pretentiously bizarre (some type of heron pokes around as Florya and Glasha cavort in the woods) until the attack on the village when it really takes off.  There are lots of close-ups and facial expressions do the talking.  The rookie actor portraying Florya overacts a bit, but he is very memorable.  Glasha is also an interesting character and it would have been nice to have found out what happens to her.
The movie can be compared to "Apocalypse Now" because parts seemed to be filmed under the influence of LSD.  It is definitely not in a league with Coppola's film, however.
By the way, did you know the Nazis were evil?  Did you realize that war corrupts children?  Were you aware that war is hell on civilians?
Read it, but skip to the Einsatzgruppen scene.