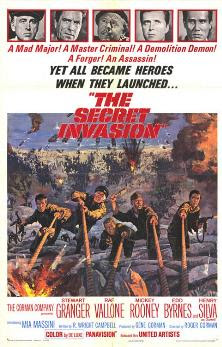 "The Secret Invasion" is a B war movie by Roger Corman that was released in 1964.  It is your basic suicide mission involving convicted criminals who will be pardoned if they survive.  The theme predates "The Dirty Dozen" by three years.  Although not in a league with the DD, it has its charms.
The British recruit a heterogeneous crew which includes a forger, an explosives expert, a master of disguise, an assassin, and a master criminal.  They have various degrees of surliness and reluctance to go.  They are led by a proper British officer (Stewart Granger) who has an ulterior motive of revenge for the death of his brother on an earlier mission.  This mission involves freeing an Italian general from a fortress prison so he can get the Italian army to switch sides.
In a scene similar to "Guns of Navarone", their fishing boat in stopped by a German patrol boat and guess who wins the confrontation.  They link up with partisans including a pretty widow with a baby  (Corman throws in a gratuitous breast-feeding).  The assassin and she hit it off, but in a scene I eerily remembered from childhood, he accidentally smothers the child while keeping it quiet when Germans are near.  The mom takes it stoically and the hardened criminal breaks down.  The asassin is played well by the usually evil Henry Silva, one of the great villain character actors of the 60s.
Mickey Rooney as the IRA explosives expert handles the comic relief better than you would expect.  When he is digging a tunnel under the fortress, he cracks "a few more days of this and I'll be able to get a card in the mole union."  As an Irishman, he naturally is always looking for his next drink.
They get surrounded and allow themselves to be taken captive because that will get them into the fortress.  They each are tortured under the orders of your stereotypical urbane Nazi.  The torturing appears half-hearted and is just your basic beatings,so they have time to plot not only their escape, but the rescue of the Italian general.  They walk out in disguise and when they are discovered it initiates an extended fire-fight with a large German unit.  Luckily, a partisan army comes to their rescue and enough blanks are expended to make several war movies.  The submachine gun should have been given a credit in this movie.
You probably can guess that not all of the team survives the escape. Here is the order of deaths: 1.  machine gunned while rear-guarding (redemption)  2.  catches a grenade to save the others (self-sacrifice)  3.  blows himself up using a grenade to take out a machine gun nest (live by the sword)  4.  dies from loss of blood after removing his tourniquet to lure the German bloodhounds away from the others (leadership)  5.  killed by Italian soldiers after he pretends to be a German soldier assassinating the Italian general (who turns out ot be loyal to the Germans) to get the Italian army fired up (thinking outside the box).  Mission accomplished!  If you are counting, that leaves only one survivor.  (Someone has to survive to tell the story so a historical movie can be made about it years later.)
This is a fun movie.  Sometimes you just want to chill out and watch some fluff that is not pretending to be anything but.  Much of the plot is ridiculous, but what suicide mission movie does not rely on suspension of disbelief?  Corman is famous for doing a lot with a little and it shows here.  The cast is not all-star, but they are recognizable for my generation.  You even have teenage heartthrob Edd Byrnes (not surprisingly the weakest of the cast).  The action is entertaining and the dialogue is not too cringe-inducing.  Do not forget that it came out before "The Dirty Dozen" so I guess you could accuse the DD of  being a knock-off!
Posted by War Movie Buff at 10:30 PM