DUELING MOVIES: "In Which We Serve" vs. "The Cruel Sea" 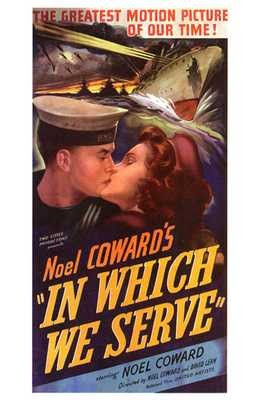 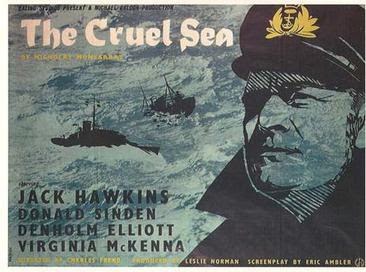 “In Which We Serve” and “The Cruel Sea” are two British war movies set in WWII. Both are set in WWII during the Battle of the Atlantic and follow the exploits of escort warships. The main characters are ship commanders, but the crews also get screen time. Both are proudly British in a stiff upper lip sort of way.


“In Which We Serve” was released in 1942. The movie is dominated by Noel Coward who stars as Capt. Kinross and also wrote the screenplay, wrote the score, and directed. In what might be the shortest opening narration the movie opens with “This is the story of a ship”. The ship is the HMS Torrin which is sunk during the Battle of Crete fourteen minutes into the movie. Some of the crew, including Kinross, take refuge in a lifeboat. The film then settles into a series of flashbacks relating the stories of Kinross, Ordinary Seaman Blake (John Mills), and others. The various flashbacks contrast the lower, middle, and upper class strata on a ship. The scenes of family life are authentic and emotionally real. One highlight of the film is X-Mas dinners of three of the crew showing how the classes dealt with the war. It is apparent in each family gathering that the sailors love their ships more than their women and the women accept it.

All the characters are proper British. A sailor who cowardly flees his post (Richard Attenborough) is forgiven by the Captain and later redeems himself before dying from a dastardly German strafing while in the life-boat. When one of the officers is informed that his wife and mother are killed in the Blitz, he takes it stoically.

This is a great movie. It is extremely well-written, not surprising from Coward. The conversations ring true. The people talk like real people, not characters in a movie. The action scenes, filmed by David Lean, are well done. There is an interesting and instructive blend of sailor’s lives and the lives of their women. It is not overly propagandistic which is amazing considering the timing of its release.

“The Cruel Sea” was released in 1953. It is based on the popular novel by Nicholas Monsarrat. The narrator tells us it is the story of the Battle of the Atlantic, of two ships, two crews, and the villain – the sea. The main characters are Lt. Commander Ericson (Jack Hawkins) and his Executive Officer Lockhart (Donald Sinden). Their first ship is a corvette, the HMS Compass Rose. The ship does convoy duty in bitter weather. Montages depict burning merchant ships and shipwrecked sailors. The sea is indeed cruel.

The movie examines command decisions. At one point, Ericson risks the ship to rescue survivors. In another, he plows through others to chase a u-boat they have located on sonar. He is stiff upper-lipped saying “we have to do these things and say our prayers at the end”.

When they return to port, they find it has been bombed. The chief had earlier told a mate that he was going to marry the sailor’s sister thus dooming one of them. (It turns out to be the sister whose houses is bombed.) Just like in IWWS, the chief takes the news stoically.

On their next cruise, the Compass Rose is suddenly hit by a torpedo and they abandon ship in appropriate chaos. This is one of the great ship-sinking scenes in cinema. The survivors spend the night in a raft until rescued. Ericson and Lockhart are assigned a new ship, a frigate. They go on the Murmansk run. The film uses real ships, not models. They track down and sink a u-boat. Upon picking up survivors, Lockhart remarks that they “don’t look very different from us, do they?”

“The Cruel Sea” is a good movie. It is not rip-roaring which makes it a realistic depiction of sometimes boring convoy duty. The sea does play a major role. The weather is the biggest problem the crews face. This is one of the wettest movies ever made. It is a good examination of command and command relationships. Ericson and Lockhart grow to respect each other and form an effective team. The cinematography is excellent. The acting is very good.

These two movies make a great double feature if you want to learn about the British naval experience in WWII. They accurately reflect the dangers of convoy duty. They are realistic in their depiction of the class structure on board a small warship. “In Which We Serve” concentrates more on the home front and the women in the men’s lives and “The Cruel Sea” concentrates more on shipboard life and tactics. They are both realistic in their combat scenes.

Email ThisBlogThis!Share to TwitterShare to FacebookShare to Pinterest
Labels: In Which We Serve, reviews, The Cruel Sea, war movies, WWII